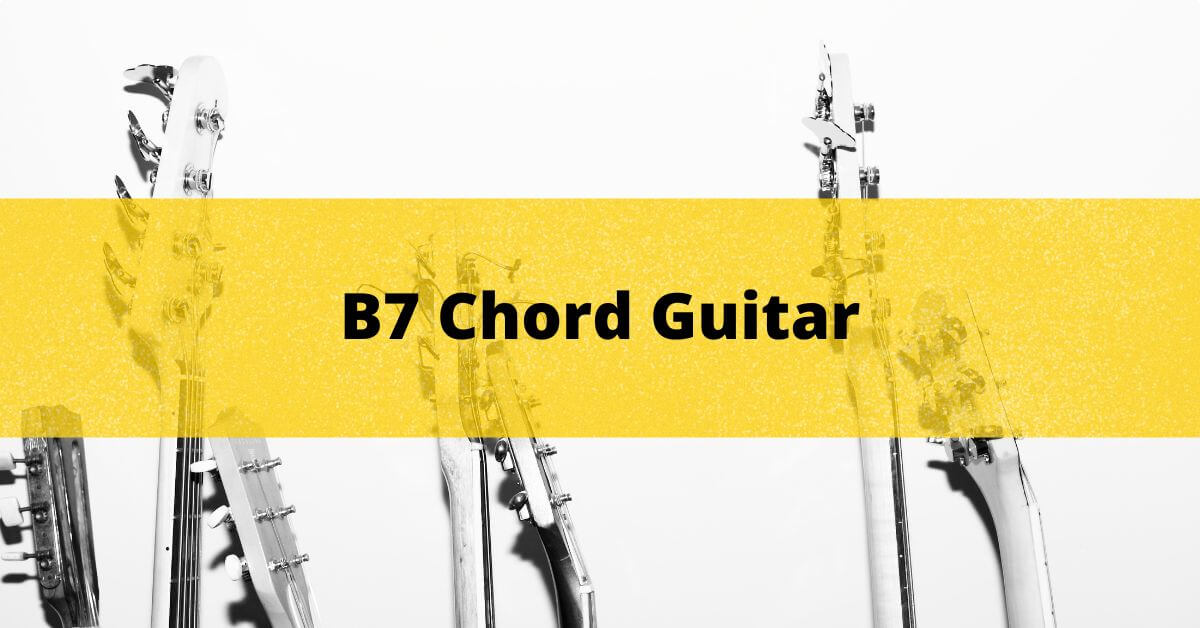 Even though it’s not one of the most popular guitar chords, the B7 should be one of the chords you’re familiar with.

It’s bright, melodic, and kind of ‘bluesy’, and it can be found in different music genres.

So today we will show you how to play the B7 chord on the guitar.

And we will give you tips on how to practice it.

Without further ado, let’s see how to make the B7 chord a part of your guitar practice!

In a way, playing the B7 chord on guitar is different than minor chords and major chords.

The thing is, this chord is a seventh chord, so it also contains a flattened 7th note of the B major scale. And this extra note is exactly what gives this chord such a distinctive, melodic sound.

In essence, if you want to turn the B Major into B7, you have to add in the 7th note of the B major scale flattened (or taken down a half-step). Either way, you need to combine B, D#, F#, and A.

To make things clearer, let’s take a look at the standard way of playing the B7 guitar chord:

You need to strum the first five strings.

And once you feel confident, you can try using the A7 barre chord shape:

While doing this, you need to leave your middle finger off the strings.

You also need to strum the first five strings.

If you don’t get it right away, don’t sweat – barre chords can be quite challenging, especially for beginners. But they will also help you improve your finger strength and dexterity.

Nevertheless, you can also start with easy B7 chord variations. They can be a good stepping stone to the full B7 chord.

One of the simple B7 chord versions goes like this:

In this case, your ring and pinky fingers need to stay off the strings.

Another way of getting comfortable with the B7 chord is by playing this:

If you’re up for something more challenging, you can try this alternative B7 chord version:

As you can see, there are different ways to play the B7 chord on the guitar. If you’re just starting to learn to play guitar, you can try easy versions and work your way up to the more complex variations.

Regardless of your level of experience, you can try different ways of playing chords to add more flavor to your performance.

And if you want to play the B7 guitar smoothly, you can practice by transitioning chords. The B7 chord can often be found in the key of G Major, and it’s frequently followed by an E chord.

You can also explore different music genres. Playing guitar songs that include the B7 chord is another effective way of improving your sound and becoming more confident.

Some of the popular tunes with the B7 chord are ‘I Can’t Get No Satisfaction‘ by The Rolling Stones, ‘Man Who Sold the World’ by Nirvana, and ‘Starman’ by David Bowie.

It seems like learning the B7 chord will allow you to play some iconic hits. It’s also an essential part of blues-influenced rock songs as well as many beautiful, soulful tunes.

If you want to add a soulful touch to your performance, you need to learn how to play the B7 chord.

This seventh chord might look difficult at first, but it’s actually not that hard to learn.

However, if you want to make it sound clean and accurate, you’ll have to be patient and persistent. But that’s the case with mastering any guitar chord.

Either way, we hope we inspired you to expand your musical knowledge and tackle this unique guitar chord!

Want an easier way to learn guitar? Check out our comprehensive list and reviews of online guitar lessons that work.

Video guide on playing the B7 chord

How to Play the Bm Guitar Chord (Tips & Easy Way)