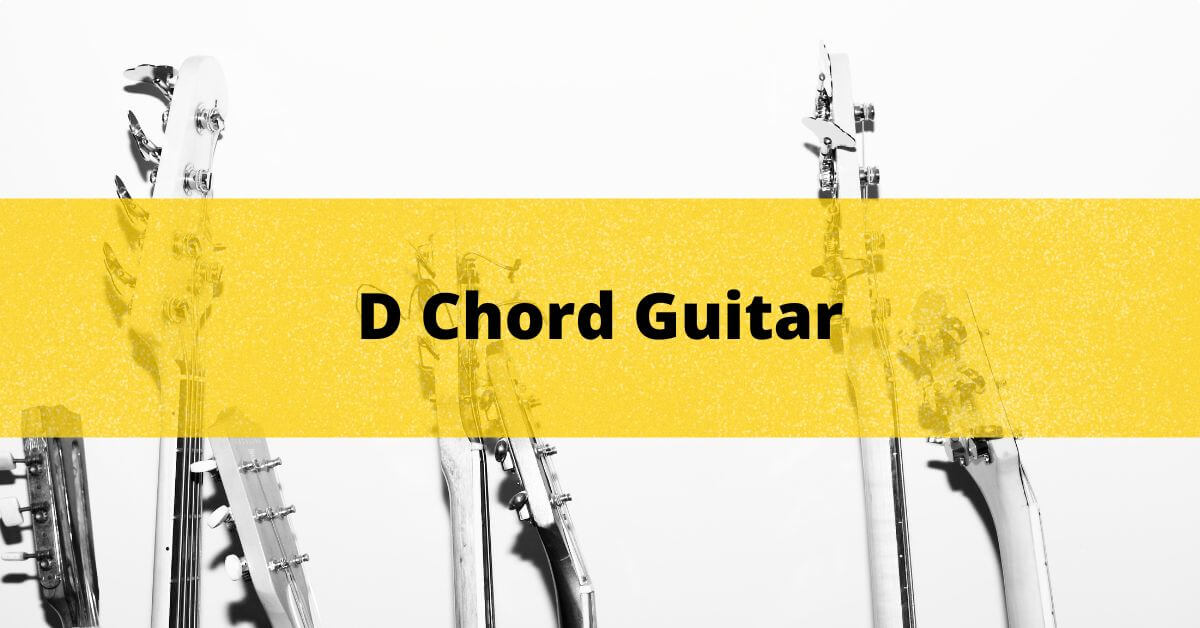 Do you want to learn how to play the D chord on the guitar and expand your chord repertoire?

Well, if you want to play your favorite pop and rock songs, learning the D guitar chord is a must.

It’s one of the most common guitar chords.

However, the D chord is also one of the most difficult chords for beginners learning to play the guitar.

But if you’re persistent and focused, you’ll be able to play it effortlessly.

Playing the D Chord on Guitar

The D Major chord forms the root of the D, and it contains the notes  D, F#, and A.

It’s one of the fundamental chords to learn on guitar, but it can also be quite tricky. The thing is, playing the D guitar chord requires using three split fingers, and that can be difficult for a beginner.

Thankfully, there are also easy D chord variations. It’s good to ease into it and try the easy D chord version first. That way, you can work your way up to the full D chord and generally more complex guitar chords.

But let’s take a look at the standard D Major chord first. It goes like this:

As you can see, to play the D chord, your fingers need to form a triangle. Visualizing a triangle is one of the ways to remember this shape.

You should be careful and try not to pluck the low E and A strings though. Playing the D chord smoothly takes some time.

But if you feel confident, you can try to play the D bar chord. It goes like this:

To play the E-shape barre chord of D Major, you need to barre the 10th with your first finger.

You can also strum all six strings.

Barre chords are usually a bit challenging for beginners. But they are also essential to learn, especially if you want to become a skilled guitar player.

Alternatively, try the A-shape barre chord for D Major. It looks like this:

To do this, you need to use your first finger to barre the strings from the A string up to the high E string. You also need to fret the 7th fret of the D, G, and B strings with other fingers. You can simply use one finger per string or barre all of them with your third finger (the most common way).

One of the most common easy D chord versions is the Dsus2. It goes like this:

To play the Dsus2, you need to make the standard open D major chord shape and remove your second finger from the high E string.

This chord sounds quite nice, and playing it will also help you improve your fretting technique.

Another variation you can try is the D Major 7:

These simpler D guitar chord versions are a great way to practice and slowly progress towards the full D shape.

It’s true – the D chord is not the easiest chord to learn on guitar. You have to use split fingers, think about placement, and so on. But over time, you’ll improve your finger strength and dexterity, and you’ll be able to play the full D chord on guitar with ease.

And once you feel comfortable with the chord, there are so many great tunes for you to play. One of the popular guitar songs with the D chord is ‘Lean On Me’ by Bill Withers, ‘Walk On The Wild Side‘ by Lou Reed, and ‘Three Little Birds’ by Bob Marley.

Many popular hits can be played with A, D, and E chords. Therefore, if you know all of these three chords, you have a variety of songs to choose from.

After all, one of the most fun ways to practice a certain chord is to play familiar songs. But to get there, you need to feel comfortable with the chord itself.

One of the ways to master the D Major chord is to practice changing between the chords. For example, you can practice transitioning from G major or A major to D and back again. In chord progressions, these chords are usually found next to each other.

Some of the most common chord progressions in D are:

After you’ve learned how to play the D chord on guitar, it’s time to practice.

Learning the D shape will allow you to explore all kinds of music genres. But to perform songs with confidence, you need to play the chords smoothly.

And the more you practice, the more accurate and clean your note will sound.

Either way, we hope this article helped you get on the right track!