How to Play the Bm Guitar Chord (Tips & Easy Way) 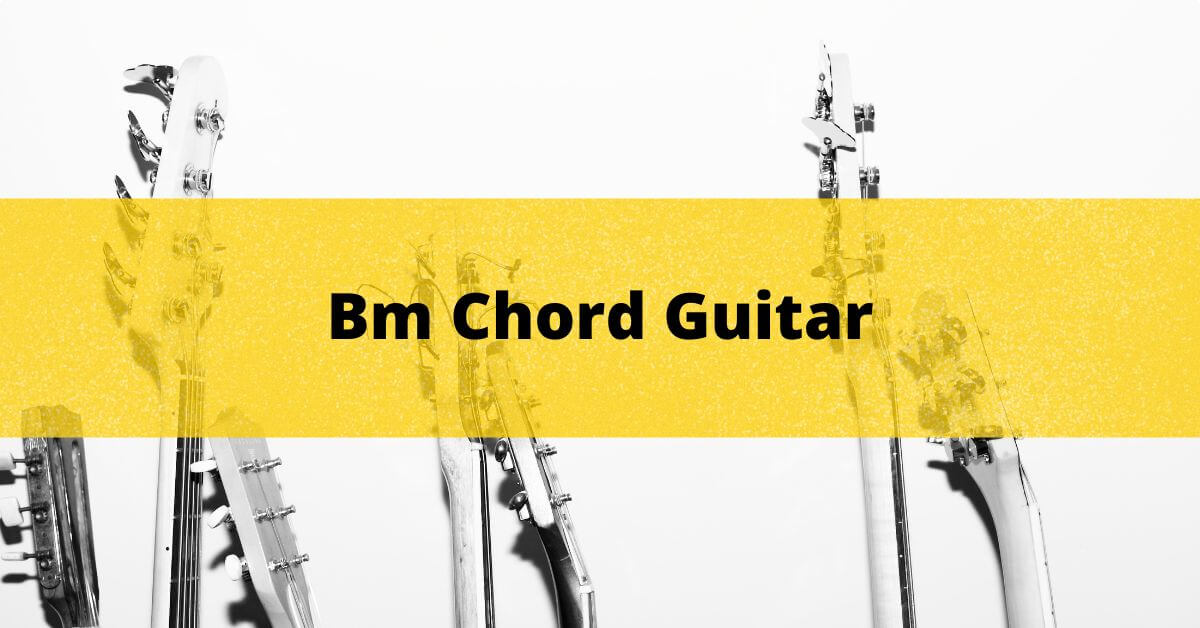 If you want to improve your guitar skills, why not learn the Bm chord?

It’s a frequently used guitar chord that will help you expand your repertoire significantly.

And to make things easier for you, we will show you how to play the Bm guitar chord both in a standard and easy way.

The B minor chord contains the guitar notes B, D, and F#. It’s also typically a barre chord, which ultimately makes it more challenging for beginners.

However, the Bm chord can be played in several ways.

Let’s take a look at the ‘traditional’ version first.

To play the B minor chord on guitar, you have to do this:

To do this, you also need to place your index finger on the fifth string and flatten your knuckle along to the first – that’s how you’ll play a barre chord.

This is not an easy chord to master, but if you’re already familiar with barre chords, it shouldn’t be problematic either.

There are also several things to be aware of if you want to make a clean sound. For instance, avoid strumming the sixth string.

And if you don’t manage to play a perfect Bm chord right away, don’t worry. Learning how to play this barre chord properly takes time and practice.

Thankfully, there are also easy Bm chord variations. So, if you’re just starting out, you can try them first.

One of the common alternative ways of playing the B minor guitar chord entails the same finger placement but without the barre. This is not actually the Bm chord, but it still sounds full.

This version is slightly easier though, especially for beginners who aren’t comfortable with barre chords.

But if you’re looking for an even simpler version, you can try this:

As you can see, this simple Bm chord variation includes only three fingers. Therefore, it’s suitable for beginners.

Playing easy chord variations is a good way to start. Over time, you’ll develop finger strength and dexterity and you’ll be ready to move on to more complex chords.

And tackling barre chords like the Bm chord is not an easy task for newcomers.

So, to help you get on the right track, here’s the easiest Bm version:

And that’s it! Super easy, right?

But although these easy variations are a good place to start, don’t stick with them just because they’re easier to play. After all, they don’t sound exactly the same.

Plus, you won’t improve your skills if you’re constantly opting for easy variations.

If you want to reach advanced levels, you need to work on it – step by step. But it’s essential to practice regularly.

Therefore, once you’ve learned how to play the Bm guitar chord, don’t stop there. You can make it perfect by practicing changing between the chords.

And when you feel ready, you can put the chord into practice. The Bm chord is used in different music genres, so you’ll have countless songs to choose from.

Some of the popular guitar songs with the Bm chord are ‘Always On My Mind’ by Willie Nelson, ‘Another Love’ by Tom Odell, and ‘Hotel California‘ by the Eagles.

The B minor is a frequently used chord, and it’s often found in chord progressions that are in the key of D and G. Therefore, learning how to play the Bm guitar chord is inevitable for every aspiring guitar player.

As you can see, there are different ways to play the B minor chord on the guitar. The Bm is typically a barre chord, but there is also an easy variation ideal for beginners.

Either way, mastering a guitar chord like B minor takes time and practice. So, don’t worry if you don’t play it smoothly right away.

If you want to become a skilled guitarist, you need to be patient and persistent – and practicing chords is an important part of your journey to learning how to play the guitar.

Want an easier way to practice and learn guitar chords? Check out our comprehensive guide on the best online guitar lessons.

36 Best Country Songs Of All Time