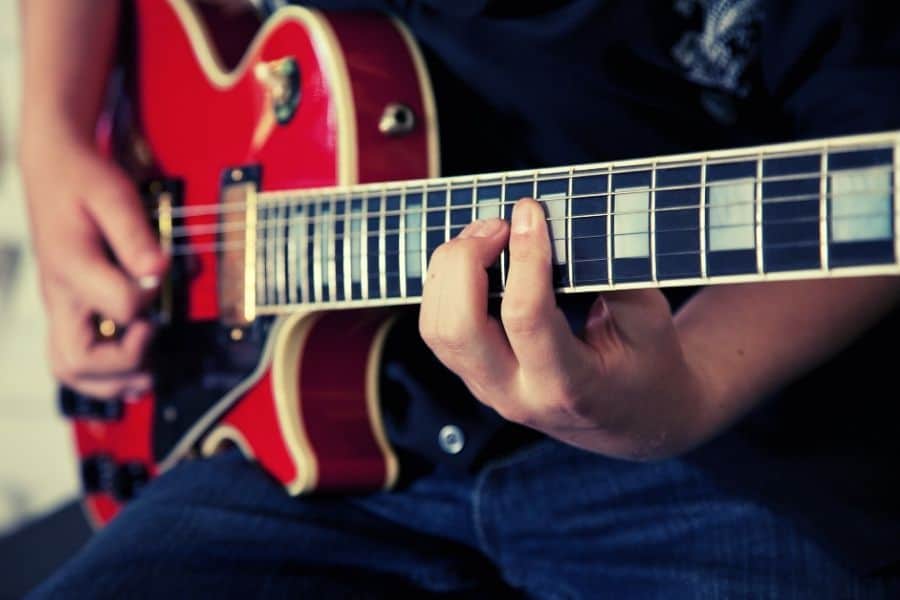 When you first start learning to play guitar, chords can seem a little bit daunting. Especially if you google a guitar chord chart that displays a ton of inversions or other complex chords.

True, once you are able to read a chord diagram more naturally, things will make a little more sense. But, when you start out it is best to simplify things as much as possible and begin with some easy guitar chords.

Learning to play along to the majority of your favorite songs can be accomplished by learning to play just a handful of essential, yet basic guitar chords.

So don’t overwhelm yourself for no good reason, opt for fewer chords and instead focus on playing them really well along with the transitions between them.

Here are some of the simplest open major and minor chords alongside a few barre chords to help you unlock the rest of your guitar neck.

We have even presented them in a logical learning order that allows you to expand chord progressions more quickly and cover more songs.

Once you have mastered the following basic guitar chords, you will find you can play a whole host of tunes from many different genres!

We are starting out with A major because it is one of the easiest chords to master holding. It is a little comfier than most chords and because your 3 fingers are in the same fret space it is easier to remember so it is the ideal place to start.

The other strings are all played open. You should technically ignore your low E (6th) as it gives a different tone and is actually a different named chord.

But, E is one of the notes of an A major chord triad so maybe play between the two sounds. You might like to add it in for effect.

Next up is E major because it is one of the easiest chords to learn from a diagram. It doesn’t require you to ignore any of the strings, all are strummed.

Holding your fingers in the position may take a little more getting used to than the A major shape above but you will find that with just these 2 chords you can already play a few songs.

Now practice transitioning between E major and A major until you can do it swiftly without thinking too much between. To begin with, you might be placing your fingers one at a time and checking yourself against the diagram but in time you will be able to place your fingers in one movement without looking.

The next basic guitar chord we have chosen is D major because there are hundreds of 3 chord songs that utilize E, A, and D major progressions. You have to completely ignore your E (6th) and A (5th) strings.

Use your first two fingers to play E and G strings on the second fret, then hold down the B string on the third fret with your third finger. To remember the shape, note that you can draw a triangle if you join the dots on the diagram.

With the relative chords A, E, and D major mastered you can try a few progressions to make sure you can switch between each one as well as the other.

G major is slightly more tricky than the 3 easy guitar chords above, but you need to learn these next 2 chords to make your repertoire a little more interesting.

Again, practice the three previously learned chords with G as a transition. G and D are relative chords and sound great when you switch between the two.

“Wild Thing” by The Troggs uses A, D, E, and G throughout, and “Bad Moon Rising” by Creedence Clearwater Revival uses just D, A, and G. They are both great songs to practice your chord changes along with!

C major is a widely used chord, it may be a difficult hand shape to get accustomed to but it is an important chord to learn.

For this guitar chord, your fingers are laid out diagonally and are covering a 3-fret distance, so it will feel like a bit of a stretch until you are used to it.

Your 3rd finger sits in the 3rd fret of the 5th string, your second on the second fret of the 4th string, and your first finger in the first fret of your 2nd string.

Remember you are skipping a string (the third) and try to refrain from picking the 6th string.

It goes great with the G major and D major chords above as well as A minor which we will go on to show you below.

Although a lot of rock & roll and Motown hits are exclusively written with a combination of major chords, sooner or later you are going to need to add some minor chords in the mix.

E minor is one of the easiest minor chords to learn, it requires 2 fingers to play and you will notice it is very similar to an E major, you are simply taking one of your fret fingers out of the equation.

To play it put your second finger on the 5th string in the second fret and your third finger on the string below it in the same fret space. All other strings can be played open.

Then you can strum between E major and E minor by placing it on and off and listening to the characteristics of the happier-sounding major and the miserable minor version.

For true misery, you are going to want to pair your new E minor with an A minor. The A minor shape is actually the same as the E major shape you just lower every finger up one string.

Try switching from E major to A minor and listen to the heartache. A minor is also a good chord to switch to from a Happy C major with great effect.

Remember as with your D major chord, the 5th and 6th strings stay muted. D minor is a common turnaround chord and sounds great in folk songs as well as used a lot in country music.

Although barre chords are considered a little more challenging, we think they make the best chord shapes to learn. The earlier the better!

When you look at the diagrams for barre chords, you will notice they are the core E and A major and minor shapes. The difference is the responsibility of each finger falls to the next finger because now you need your index finger free.

You are going to use it to replace the nut of your guitar and it has to provide the same sort of tension.

This is to give you a good insight into the premise of barre chords as a concept so you understand what is going on.

However, because the tension from your guitar nut is pretty strong, being able to hold a barre with your index finger beside it is actually the hardest part of learning a barre chord!

The F major barre chord requires you to hold down all the strings in the first fret with your index finger which as we said above is no easy feat.

Shift the weight back onto your index finger to achieve the barre, but as we said, practice further up the neck away from the nut for reduced tension.

F major gives you an important chord for the blues and rock & roll in the key of C major, it has to be learned sooner or later!

As you learned with E major and E minor, you only need to drop your second finger out of the F major pattern above to achieve an F minor. Switching between the two is good practice and used in various 1950s & ’60s music compositions.

A Bb major barre chord is an A major shape played with your 2nd, 3rd, and 4th fingers instead of your 1st, 2nd, and 3rd. This frees your 1st finger up to provide a barre along all the strings in your first fret taking the A major chord up one semitone to Bb major.

Try playing F major and Bb major together, as a pair, they sound great together.

Learn how to play the B chord here.

Bb minor as you will probably have guessed is the A minor shape again slid one fret along and use your index finger as a makeshift guitar nut.

By mastering these four barre chords and learning to slide the shapes along the neck of your guitar, you very effectively unlock all your basic guitar chords, both major and minor.

Granted they will not come easy and it takes a lot of perseverance to get the power in your index finger right. Without the right amount of pressure the notes within the chord will not ring out properly, but as with learning anything, practice makes perfect!

With the mix of open guitar chords and the introduction to barre chords, we have given you some easy guitar chords which you can add to your repertoire in next to no time at all.