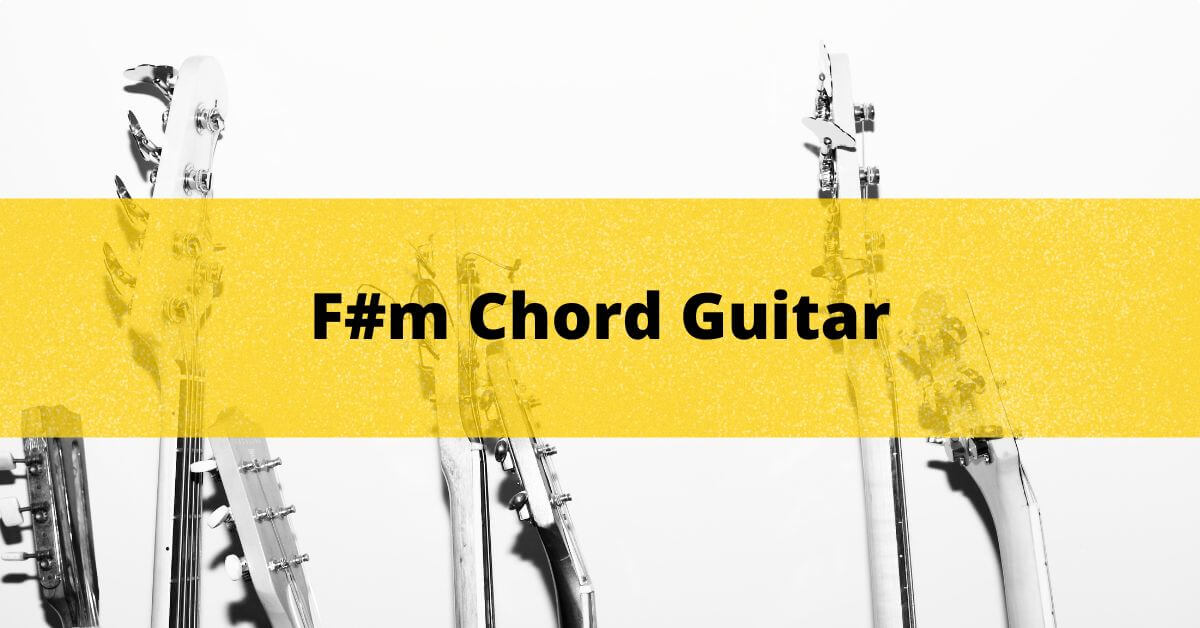 Are you ready to add a new guitar chord to your repertoire?

The F#m chord, pronounced F sharp minor, is one of the most common guitar chords in modern music.

But it’s also a bit tricky for beginners.

Luckily, there are several ways to play it. So, we will show you how to play the F#m guitar chord both in a standard and easy way.

With the right approach, you’ll learn how to play it effortlessly in no time!

The guitar Fm chord is considered a bit challenging because it’s normally a barre chord; that means you have to cover more than one string with one finger. Therefore, mastering barre chords requires finger strength and dexterity.

Without further ado, let’s see what the F sharp minor chord looks like.

You need to strum all six strings.

Playing the barre includes placing your first finger across all the strings at the second fret while using your second and third fingers to fret the fourth and fifth strings.

As you can see, it’s not so easy to play the F#m chord on the guitar. But with enough practice, you’ll be able to play it smoothly.

The best way to practice chords is to combine them with other chords. And if you want to practice scales, you can try playing the F#m natural minor scale, the F# minor pentatonic scale (the easiest scale for the F#m), the F# minor blues scale, and so on.

And when you feel comfortable with the chord itself, you can try to play different guitar songs. Some of the songs that include the F#m chord are ‘All These Things I’ve Done’ by The Killers, ‘Crazy’ by Aerosmith, ‘Take On Me’ by a-ha, and ‘Fake Plastic Trees‘ by Radiohead.

But if you want to try the easy version of the F#m chord first, you can try playing this:

To play the easy F#m chord on guitar, you need to strum the thinnest three strings.

Once you learn how to play the F sharp minor on guitar, you can try practicing F# Minor triads. Playing triads is a great way to practice chords and improve your finger strength and dexterity as well as coordination.

The voicings for the F#m triad are:

Besides the key of F minor, some of the keys that include the F#m chord are:

There are also alternative ways of playing the F#m chord. For example, Fm9, Fm6, and Fm11 can be used to add more nuance to the F minor chord. The Fm7 chord is also used interchangeably with the F#m chord.

Alternatively, you can use variations of the F chord like Ab6 and Ab69. All of these options work well as a substitute for the F#m chord.

However, if you want to learn the standard F#m chord, you need to be ready to play something more challenging. The F#m can’t be played as an open chord, so you’ll have to be patient and persistent; the common way to play has a barre, and that’s always a bit tricky for beginners.

On the other hand, you shouldn’t be afraid of barre chords. And if you want to become a skilled guitar player, tackling barre chords is inevitable.

Either way, the F#m is a rather popular guitar chord, and if you learn how to play it, you’ll be able to play numerous guitar hits. So, start with the easy F#m chord first, or learn the standard version and combine it with other chords.

If you want to play the F#m chord effortlessly, you need to practice transitioning as well as play scales and relevant songs. All of that will help you become more familiar with the chord.

And after enough practice, your muscle memory will start to kick in, and you’ll be able to play the F#m guitar chord without having to think about it.

We hope this article helped you learn how to play the F#m chord as well as how to practice it.

Mastering the F#m chord isn’t easy, but it’s important. You just need to ease into it and practice regularly.

After all, learning the guitar takes time; but it’s definitely worth the struggle.

How to Play the C Chord on Guitar (Tips & Easy Way)