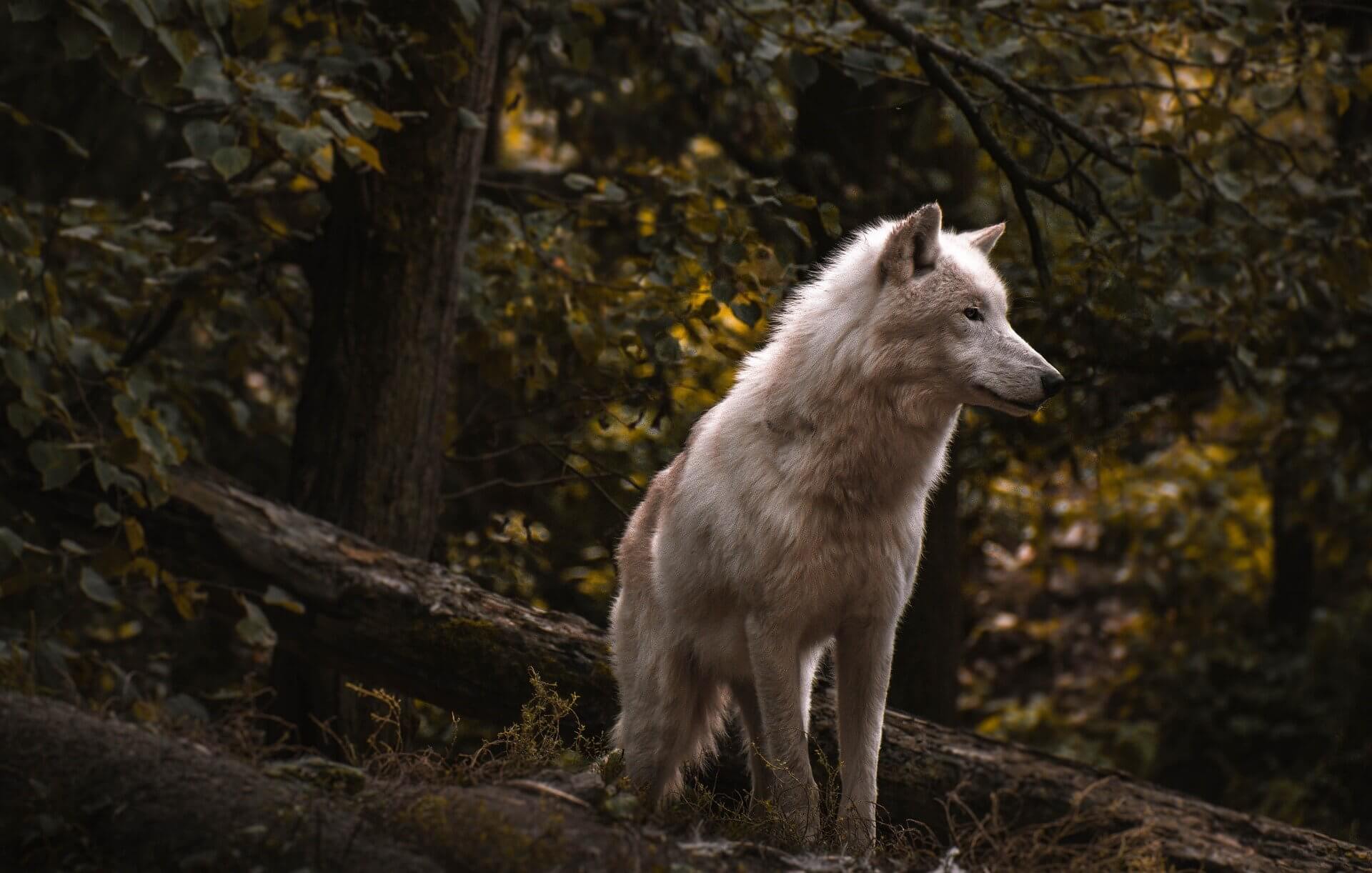 Wolves inspired many tales, films, and songs, and they’re a part of the mythology of many cultures.

Wolves can represent strength, loneliness, lust, and wilderness. So the fact that musicians have always been inspired by these iconic animals comes as no surprise.

Keep reading to discover the best songs about wolves.

You’ll come across both familiar hits and inspiring, hidden gems!

And you’ll certainly feel connected to nature and the wolf inside you.

We’re starting out with the soundtrack of one of the best movies about wilderness.

The result was a compilation of mesmerizing folk-rock songs. The soundtrack was also a part of Eddie Vedder’s debut solo album.

And the track “Wolf”, just like the rest of the album, captures the freedom, ruthlessness, and beauty of the wilderness.

It’s one of the songs about wolves that tackles the feral side of every person.

Also, “Howl” is a song about passion and love, but Florence was clearly inspired by classic horror stories about ghosts and werewolves.

“If you could only see the beast you’ve made of me
I held it in, but now it seems you’ve set it running free
Screaming in the dark, I howl when we’re apart
Drag my teeth across your chest to taste your beating heart.“

3. AURORA – “Running With the Wolves”

“Running With the Wolves” is a captivating song about wolves, wilderness, and running free.

AURORA reportedly wrote the song during the blood moon and explained in one of the interviews: “I just imagined the moon turning all the people around the world into wild animals, running away from all the rules, all the materialism and technology.”

“Wolves” by Selena Gomez and Marshmello is probably one of the most popular songs about wolves of the past decade.

There are several theories about the meaning behind the song. It could be a song about Selena’s struggle with lupus or simply about dark times everyone goes through once in a while.

Either way, “Wolves” is a catchy pop tune that you can still regularly hear on the radio.

It’s one of their songs with a more intense rock sound, and it reflects the emotions that are usually associated with wolf-themed songs.

“Sheltered, you better keep the wolf back from the door
He wanders ever closer every night
And how he waits begging for blood
I promised you everything would be fine.“

6. Of Monsters and Men – “Wolves Without Teeth”

A lot of songs about wolves mention running with the wolves.

In “Wolves Without Teeth”, the narrator is running from wolves, which adds a different meaning to it. Wolves can represent fear or any kind of obstacle that can, as the lyrics suggest, be defeated with the power of love.

“I keep the wolf from the door
But he calls me up
Calls me on the phone
Tells me all the ways that he’s gonna mess me up.“

Another song with a wolf representing something bad is “Wolf at the Door” by Radiohead.

The song is from the band’s 2003 studio album “Hail to the Thief”, and there are many speculations about the meaning behind it.

The most obvious meaning of “Wolf at the Door” would probably be the expectation of a treat of some kind. But if you’re a Radiohead fan, you’ll know that their music often doesn’t entail obvious messages.

“The Werewolf” is a song with a wolf howling, quirky lyrics, and some catchy hand clapping.

While wolves are associated with various meanings, werewolves rarely represent something good, both in film and music.

“The doorbell’s ringing, could be the elves
But it’s probably the werewolf, it’s quarter to twelve
And when it’s midnight, and the wolf bites.“

When thinking about popular songs with wolf in the title, “She Wolf” definitely comes to mind.

Shakira released this catchy hit on her album of the same name in 2009.

Although the music video suggests that “She Wolf” might be a song about a girl breaking free from her partner, Shakira claimed it’s about women who feel empowered and free to express themselves.

Here comes another radio-popular hit with the title “She Wolf.”

The song by David Guetta and Sia mentions wolves several times, with the intention of depicting ideas of love, strength, and our wild side.

“Did she lie and wait
Was I bait, to pull you in
The thrill of the kill
You feel, is a sin
I lay with the wolves
Alone, it seems
I thought I was part of you.“

“Wolf” by the Swedish folk duo First Aid Kit is a beautiful, indie tune with catchy, tribal drums in the background.

And along with their dreamy vocals and interesting lyrics, it’s definitely a song you keep coming back to.

“Wolf-mother, where you been?
You look so worn, so thin
You’re a taker, devils-maker
Let me hear you sing.“

Released in 2003, “Hungry Like the Wolf” remains one of the most famous songs about wolves.

Well, perhaps it’s not really about wolves, but it sure is about someone who is hungry like the wolf. And you can interpret that in any way you want.

Even the band admitted that they’re not sure what the lyrics of the song represent.

“In touch with the ground
I’m on the hunt I’m after you
Smell like I sound, I’m lost in a crowd
And I’m hungry like the wolf.“

“Werewolf” by the talented American artist Cat Power was originally released by Michael Hurley in 1971.

“Oh the werewolf, the werewolf
Comes stepping along
He don’t even break the branches where he’s gone
Once I saw him in the moonlight, when the bats were flying
I saw the werewolf, and the werewolf was crying.“

“I know I saw something sinking in the back of your eyes
I hope it wasn’t hope that was hoping
Hoping for the very last time
Hard to be optimistic and realistic at the very same time
Why can’t we meet in the middle sometimes? “

If you’re searching for a wolf-themed song with a rather different atmosphere, you should check out “The Wolf” by the American group The Spencer Lee Band.

It’s a groovy, energetic, and seductive tune that will get you moving right away.

“Ooh, howling out your name
Ooh, red like champagne
Ooh, you’re gonna feel the vibes
When the wolf comes out tonight. “

And we still didn’t forget about this song; simple yet mesmerizing harmonies and the singer’s voice reminiscent of wolf howls in some moments create a beautiful, memorable atmosphere of the song.

“Gold I swam into your spell
On the rite of god we fell
You were plush and I laid bare
You had me howling. “

“Hour of the Wolf” by the American surf rock band Surf Curse provides another perspective on the theme of wolves and the ‘bleeding moon.’

Although the song conveys melancholic yet hopeful emotions accompanied by the band’s signature sound, it depicts the wolf in a classic tale-like way.

“Beware of the bleeding moon
‘Cause I’ll still missing you all day
In every way
Beware of the witching hour
‘Cause I can feel you in my room
Is that still you?“

This song perfectly captures the essence of what wolves in many songs represent. It’s untamed, passionate, and powerful.

The song was released in 2006 and it remains one of the band’s greatest hits.

This uplifting rock track by the Scottish band Biffy Clyro was, in fact, inspired by David Attenborough’s documentary.

The lead singer Simon Neil even named the song by Attenborough’s reference, apart from being inspired by the animals’ strength and fearless attitude.

“Wolves” is one of the tracks from Ben Howard’s debut studio album “Every Kingdom.”

Although it’s essentially a song about losing faith in love, the song has a hopeful twist, and it certainly evokes the feeling of being connected to nature.

We can easily imagine ourselves running with the wolves with this song.

After searching for the best songs about wolves, we’ve realized how many great songs were inspired by these magnificent animals.

We hope you enjoyed our playlist, whether you’re a lone wolf or wolves are simply your favorite animals.

Either way, what wolves ultimately represent is the untamed wilderness, and that’s why they will always be so inspiring.

As George R.R. Martin said: “A man might befriend a wolf, even break a wolf, but no man could truly tame a wolf.”