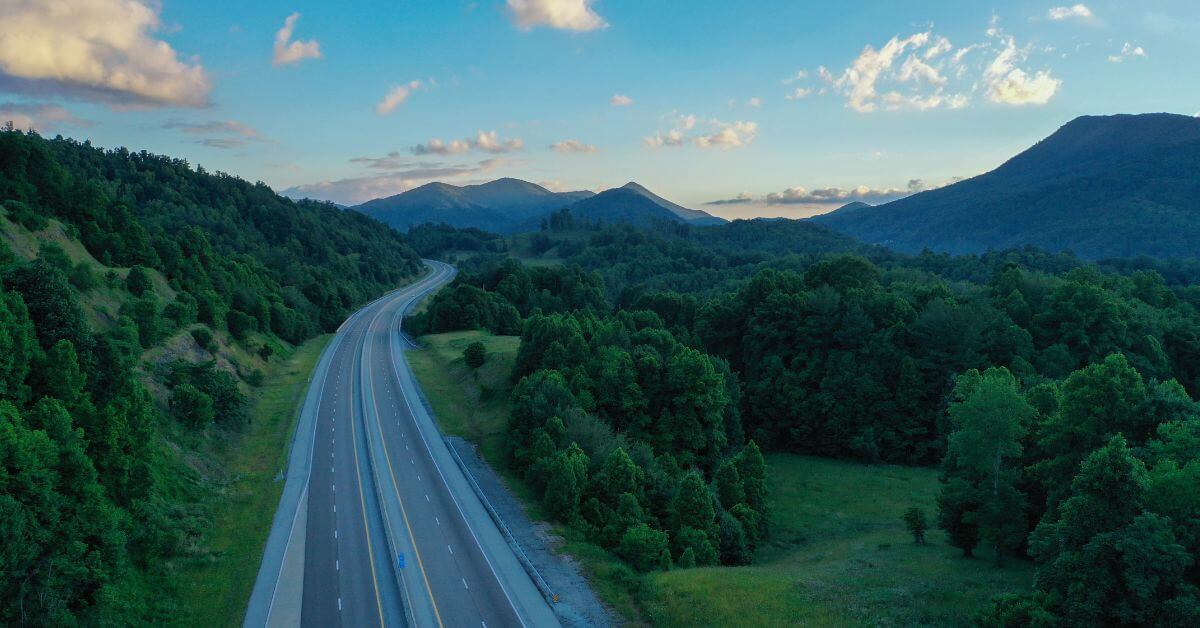 But as it turns out, there’s much more to enjoy in The Volunteer State than just the food-country music combination.

Think about the unique history, the state’s natural beauty, and the general culture.

Nothing can possibly go wrong when visiting the southern state, located to the north of Alabama and south of Kentucky.

With its rich history of good music, we aren’t surprised there are countless songs with Tennessee in the lyrics.

And below are the 30 best songs about Tennessee (the Great State) to kick-start your adventure south of the US.

And she paints a vivid picture of her childhood in what has become one of her best-ever songs.

The singer gives the listeners a glimpse of her early days.

And it’s hard to listen to the lyrics without thinking about the good old days.

The single peaked at #19 on the US Billboard Country Charts.

2. “Back To Tennessee” by Billy Ray Cyrus

The excitement of going back home inspired Billy Ray Cyrus to write a beautiful song about Tennessee.

He can’t hide his joy when he finds out that ‘Hannah Montana: The Movie’ will be filming in The Volunteer State.

This is the same time he’s made the host of the ‘Nashville Star’ TV show.

What a joy to come back home for the iconic country singer!

Chris Stapleton compares his new lover to a favorite drink.

The song’s title is inspired by the singer’s assertion that his darling is “as smooth as Tennessee whiskey.”

And “as sweet as strawberry wine.”

The main message beyond the metaphor is the singer’s solitude before finding the one.

And he won’t stop celebrating.

4. “Nashville Without You” by Tim McGraw

Country music singer Tim McGraw goes back to his roots in his wonderful 2013 composition.

He’s convinced life in Nashville will never be the same again without his lover.

He covers different topics in the song, but one that stands out is his desire to go back home.

McGraw’s song is from his 2013 Two Lanes of Freedom album.

Emmylou Harris is madly in love and can’t hide her joy.

She sings about that one person that makes her life complete.

Rising to fame at a time when male artists were the face of country music validates Emmylou’s appearance on this list.

That also cements her status as one of the best female country stars in history.

And it’s little surprise that fellow country singers like Shania Twain and Reba McEntire always looked up to her.

6. “Back Where I Come From” by Kenny Chesney

“Back Where I Come From” is about the memorable places you grew up.

We all have those fond memories of places that shaped our childhood.

And this is one of the best Tennessee songs to relive such memories.

As you trace your roots, you think about your old friends, family, and childhood experiences.

And everything becomes special.

7. “This Ain’t Tennessee” by Garth Brooks

Brooks isn’t singing about a woman.

He’s lamenting about life in a new place that can’t match The Great State.

It is a song about homesickness and a beautiful tribute to the singer’s native state.

Who would have thought that an Alabama-named band could compile a beautiful tribute to Tennessee?

But here we are, talking about a catchy tune about Tennessee.

The narrator drives through the state in his lover’s company, enjoying the beautiful scenery.

Looks like the perfect setting for the two lovebirds.

9. “Down In Tennessee” by John Anderson

John Anderson can’t seem to get over an ex-lover.

And he tracks her down in Tennessee to ask for a hand in marriage.

Of course, the mission is doomed to fail.

But the singer isn’t giving up without giving it a fight.

If you are from The Volunteer State, there’s nothing as relatable as Nashville Children’s Choir’s lyrics in this song.

This is a unifying song about Tennessee and the state’s official anthem.

It celebrates the whole state and is sure to evoke different emotions along the way.

Sugarland’s song follows the life of a couple willing to make their union work at all costs.

It is a great tune to sing along to and one of the best pieces about Tennessee.

Speech wrote the song after losing his grandmother and brother, two close people who meant a lot to him.

In the song, the narrator seeks guidance from above while paying homage to Tennessee, a place that brought him so much joy.

Memphis has produced  many stars like Elvis Presley, Justin Timberlake, and Isaac Hayes.

And in this song, Elvis confesses his love for the beautiful city.

It is an upbeat tune with classic Elvis vocals.

14. “Walking In Memphis” by Marc Cohn

He might have been a one-hit wonder, but Marc Cohn’s song is still popular enough to make many people fall in love with Memphis.

“Walk In Memphis” is a tribute to the city and has lived in many people’s heads.

Marc mentions the most notable things in the city, like the Delta blues, Graceland, and Beale Street.

Many Tennessee lovers will always have a soft spot for Osborne Brothers’ simple song about simple life.

The narrator yearns for an easy life in Tennessee, mingling with wild women while paying no telephone bills.

The energetic tune has made even strangers fall in love with Tennessee.

This is a humorous song about Nashville and its culture.

The lyrics capture the city’s transformation over the years to the glamorous place it’s become.

17. “Maybe It Was Memphis” by Pam Tillis

Pam Tillis remembers a former lover in her 1991 mid-tempo ballad.

The narration is based on their meeting in Memphis, and the lyrics capture Pam’s emotions.

Many artists have sung it in reality singing competitions, including Carrie Underwood and Lauren Alaina.

18. “The Wrong Side Of Memphis” by Trisha Yearwood

And she heads to Nashville, northeast of Memphis, to pursue her music career.

She regrets waiting too long to take her chances.

The singer’s ambitious journey and memorable vocals will make you fall in love with the song instantly.

The man in Ronnie Milsap’s song wants to go back to Tennessee in search of someone special.

The song was one of the greatest hits from Ronnie’s 1980 Ronnie Milsap’s Greatest Hits album.

And it is also one of his signature tracks.

Today, many Tennesseans know the hit as one of the state’s official songs.

George Strait and Alan Jackson collaborated to give us one of the best Tennessee songs.

In the song, the duo laments the death of traditional country music.

They released the song at a time when everybody felt the influence of pop elements on country music.

And to the duo, this is the clearest sign that traditional country music is dying right before everyone’s eyes.

This is probably the least popular song with Tennessee in the title, but it resonates with many people’s feelings.

Darryl Worley is exhausted after a hard day’s work and craves a magnificent outdoor view while fishing.

It is just about the natural beauty of the state.

And it peaked at #31 on the Billboard Hot Country Singles chart.

Jason Aldean answers what it would take to succeed as an artist in Nashville.

According to the singer, making it here “is all about finding what sets you apart from everybody else.”

Nashville will chew you up immediately if you don’t have thick skin.

Listening to soulful blues can be therapeutic when you miss your lover.

And this song is about a man separated from his darling by distance.

He misses her company and tender touch.

And he sings blues to relieve his pain and loneliness.

The singer is in love with a girl he wants to keep.

He’s convinced she’s the one, and he would never trade anything else for her.

If circumstances allow, he will be with her forever.

“Tennessee Waltz” has been covered by many artists, from Sam Cooke to Otis Redding and Leonard Cohen.

But Patti Page is credited with releasing the original version in 1950.

It is a beautiful country song about a woman dancing with her lover.

She loves him and would love to spend the night together.

Another one by the renowned American country music band.

But this time, they celebrate the beauty of Tennessee state as they sing about a desire to go back home again.

Life in Tennessee is simple and peaceful, which they passionately look forward to.

You can find it from Alabama’s 1980 My Home’s in Alabama studio album.

27. “Me And Tennessee” by Tim McGraw and Gwyneth Paltrow

“Me and Tennessee” was originally written for the 2010 ‘Country Strong’ film.

And it is a love confession for Tennessee state.

Tim McGraw and Gwyneth Paltrow are portrayed as a couple.

And there’s only one place they’d rather be; Tennessee.

You don’t want to leave it out of your playlist when tracing your southern roots.

28. “Tennessee” by The Wreckers

The woman in The Wreckers’ song would love to return home after a failed relationship.

“Yes, I guarantee/ Things are sweeter in Tennessee,” goes the outro.

If you want the best country songs about Tennessee, start with this one.

29. “When It’s Iris Time In Tennessee” by Rick Pickren

Coming at #29 is a song that captures the beauty of Tennessee State in the springtime.

It is now recognized as one of the state’s official songs.

“Sweetness of Spring memories bring/of a place I long to be/Land of Sunshine calls this old heart of mine/come back to Tennessee.”

And it’s only fitting to finish with another one from the Queen of Country.

Not one to hide her love for her hometown, Parton wrote another memorable song about Tennessee.

She misses the place and reminisces about the simple life and all the fun activities they had.

Only if someone could bring back those memories.

Nashville, in particular, has a spectacular musical history, getting nicknamed the “Music City” at some point.

Songs with Tennessee in the title are excellent compositions with a little bit of everything.

Some talk about homesickness.

And the rest, like “Visit Me In My Music City,” are just for fun.

Hopefully, you will consider this list the next time you want to relive the Tennessee memories.

35 Best Songs About The Weather of All Time