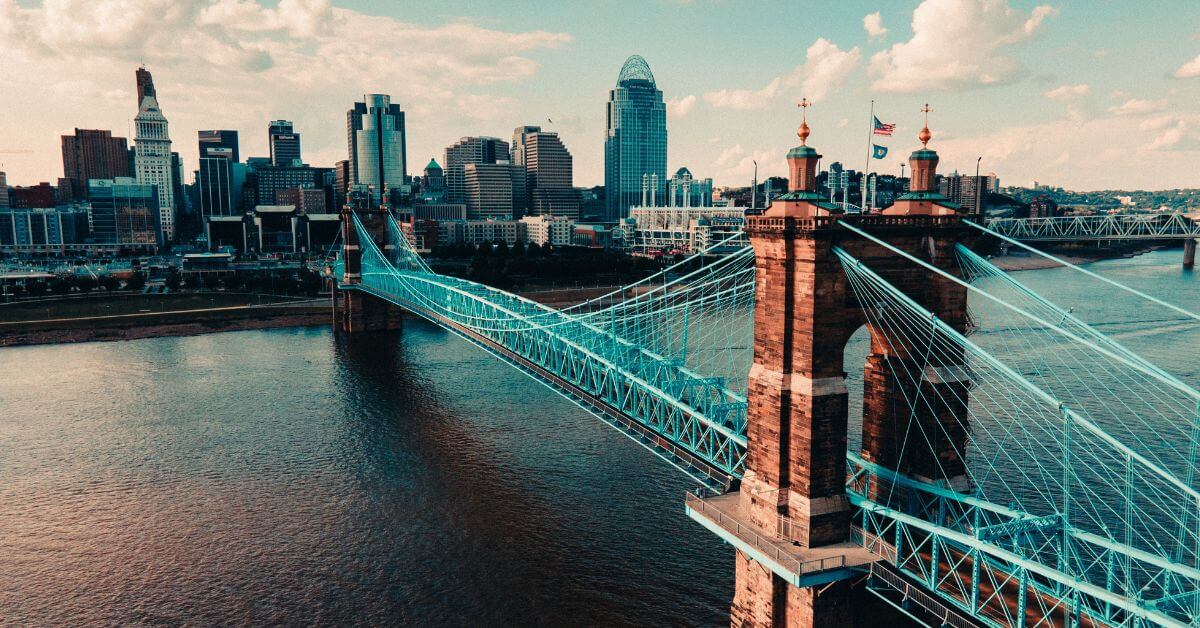 Ohio State is rich in history, nature, and culture.

And it’s quite baffling that many people often overlook it when choosing the best travel destinations in the USA.

The great state has something for everyone, from vibrant cities to glitzy amusement parks.

And as it turns out, The Buckeye State has also inspired artists from all backgrounds and songs of all genres.

Songs about Ohio can be a tribute to the state or a nostalgic piece of art when you want to relive the memories.

But sometimes, you will also find beautiful environmental anthems like Cuyahoga.

Below are the 25 best Ohio songs you can play to connect with the beautiful state.

1. “Ohio Is For Lovers” by Hawthorne Heights

Hawthorne Height’s emo song kicks off our list because all the band members hailed from The Buckeye State.

The band’s signature track was part of their The Silence Black and White album.

And it is a confessional song about separation.

Ohio will always hold a special place in the singer’s heart, no matter the circumstances.

This song about Ohio will have you looking back at your hometown with the fondness of a child.

It is a nostalgic song about that memorable place you can never get off your mind.

The narrator looks back with a little regret because he didn’t appreciate Ohio enough when he lived there.

The lyrics are so absorbing you lose yourself thinking about the past.

“Boy In Ohio” is another nostalgic song to relive the memories.

Philip Ochs’ Ohio song finds the singer reminiscing about his past life.

He thinks about this wonderful place and how beautiful life was back then.

Of course, he can’t rewrite history, but he will keep the memories.

4. “Escape From Ohio” by Electric Six

Unfortunately, not all songs with Ohio in the lyrics express a positive feeling.

Like this 2009 hit by the Electric Six about apparent hate for the great state.

The narrator recalls a terrible experience in Ohio and has nothing positive to say about the place.

He wanted to escape from the state as soon as possible.

And he expresses his frustration in the lyrics.

“There’s only one sure thing that I know/I’ve got to get out of Ohio! /’ Till then I’ll never feel love.”

5. “Girl From Ohio” by The Outlaws

Henry Paul wrote a beautiful Ohio song based on a true story about a girl he dated.

The lady relocated to Ohio soon after high school.

And the song expresses the emotions of the first romantic encounter.

The song is about Paul trying to reconnect with his one-time lover.

And the singer expresses it so well in the lyrics.

6. “My City Was Gone” by The Pretenders

There’s nothing more heartbreaking than seeing a place you once called home getting destroyed.

And the narrator is heartbroken when she returns to Ohio, and everything’s gone.

She’s shocked upon returning, only to find that her backyard is never the same again.

The glaring social and environmental issues dominate the lyrics.

And the singer challenges the people to do better.

7. “Bloodbuzz Ohio” by The National

You can think of it as a beautiful song about the fear of returning home.

But metaphorically, The National’s song expresses the theme of transitioning from your former self to a newer version.

At least, that’s according to The National’s lead singer, Matt Berninger.

“I was trying to shed my skin,” he explains.

Of course, different people have different ideas about the song’s meaning.

But it is one of the most beautiful pieces ever written about Ohio.

We don’t know what the protagonist wants in this song.

We even don’t know her name.

But one thing is certain; she isn’t looking to settle down now.

She wants to enjoy her life, probably make a few mistakes, and have fun.

One can argue that it is a ceremonial song just by looking at the title.

But it is a lot more than that when you dig deeper.

The Black Keys’ “Ohio” is another beautiful song that screams, “I want to go back to Ohio.”

The setting is Akron, Ohio.

And tells the story of homesickness, with the singer longing to return home with every passing day.

He might be in a big city having his best life, but nothing compares to the feeling of coming home.

The lyrics are perfect for anyone who misses their hometown.

And the passionate narration will give you happiness when you look back to your roots and see how far you’ve come.

“Ohio” by Modest Mouse is a redemption song about traveling through life.

While driving on Ohio road, the narrator reflects on his life.

And the lyrics paint a vivid picture in the listener’s mind.

Nobody was best placed to warn the people about an impending storm than the Canadian-American rock band.

And the storm here is a tornado.

This was the first time the American band was shifting from their usual pastoral tales to urban blues music.

And that makes it pleasant-sounding.

Bruce Springsteen describes the collapse of Youngstown, a city in Ohio.

Once regarded as the core of the American manufacturing belt, it’s sad to see the city folding right in front of us.

The 1977 decline in steel industry jobs might have contributed to Youngstown’s collapse.

And the singer laments the collapse of what was once the backbone of the state’s economy.

This is a mournful protest song condemning the Kent State Shootings of 1970.

It is a sad song about the events of the day and a strong protest against the war.

The American singer talks about a Saturday night in Toledo in a passionate way that only he could dare attempt.

It’s a humorous track that elicited mixed reactions from people.

You won’t like the song if you are like some Toledo residents, especially when John describes the city as a boring place with boring people.

But if you love satire and humor, the song should feature in your playlist.

For anyone wondering, Cincinnati is a beautiful city in Ohio.

And The Seedy Seeds wrote a beautiful song about their hometown.

In the song, the musical band describes Cincinnati’s beauties, like the hills and the magnificent towers.

In another nostalgic song about Ohio, Randy Newman looks back at the good old days with fondness.

He recalls how people were good and courteous in the past.

He switches his narration to the environment while recalling how people enjoyed clean air and beautiful nature back then.

The singer’s only wish is to go back to 1903 and recreate the wonderful moments.

“Cleveland Rocks” is the de facto Cleveland anthem for a good reason, and it’s remained relevant to the locals for many years.

The song was Ian’s response to the people who labeled Cleveland uncool, with LA and NYC always taking all the attention.

It’s a place he’s become quite fond of, and he would die defending it.

And the first way to do so is to give the Ohio haters a piece of his mind.

Ohio Players wrote a beautiful ode to their hometown, “O-H-I-O.”

It is an upbeat tune with a catchy melody.

And the message hits home if you are from the great state of Ohio.

The repetition of the word Ohio throughout the song makes it stick in anyone’s mind.

Damien Jurado’s song is another I wanna go back to Ohio state song.

The woman in the song has been away from her hometown, presumably Ohio, for some time.

Unsurprisingly, she wishes to come back home.

She longs to see her mother’s face and wants to hug and kiss her upon her return.

20. “Going To Cleveland” by The Mountain Goats

“Going to Clevelands” is a beautiful story told so well you could lose yourself in the narration.

When John realizes that his romantic affair is on the verge of collapsing, he can only think about one thing; quitting.

He’s ready to end the relationship and stay as far away from his soon-to-be ex as possible.

And that place can only be Cleveland.

What would you do if a lover rejected your marriage proposal?

Accept and move on?

But not many people have the courage to do that.

And that’s the sad story in Joan Baez’s folk song.

The narration follows the love story of a man and his better half with a sad ending.

While on the banks of the river Ohio, the girl rejects the man’s marriage proposal.

And finding the pain too hard to bear, he kills her lover at the river bank.

He can’t get over the ensuing guilt as he regrets his actions and anger.

Clocking at only 47 seconds is a hauntingly beautiful song by Joseph Arthur about longing.

The narrator is waiting for someone who seems uninterested in reciprocating the love.

The singer would have loved to be with the special someone in Ohio.

But he’s resigned to any eventuality because nothing looks promising.

It is a classic case of unrequited love.

There’s no other place the singer would rather be than home.

And there’s no better feeling than returning to a place that gave you so much.

The Beach Boys want to spend the summer with their loved ones in a special place.

And the instant thought is their hometown, Ohio.

“Cuyahoga” is a beautiful environmental anthem written specifically for the Cuyahoga River, running through Cleveland, Ohio.

It explores the topic of river pollution and its impact on the people.

“Cuyahoga” is an inspiring tune and a lament and one to include in your playlist.

It is also a call to action, challenging people to do better regarding pollution.

“Let’s put our heads together/And start a new country up/Up underneath the river bed/We’ll burn the river down.”

Our last song about Ohio is written from the perspective of someone who misses the state.

It is a lighthearted tune with a catchy melody to complete your playlist.

This might be the perfect song if you need an easy-going tune to relive Ohio memories.

Forget the endless jokes about Ohio.

It is a great state with something for everyone.

Coincidentally, it has inspired some of the greatest artists and musical bands, like John Denver, The Carpenters, and The Beach Boys.

One thing you will notice about Ohio songs is that they are beautiful.

Some tell passionate stories that you can lose yourself into.

And a few take a darker theme, like murder.

Whatever connection you have with the great state of Ohio, we hope you will find a beautiful song from our playlist that resonates with such feelings.

25 Best Songs About Stars of All Time

12 Best Songs About Psychos of All Time