35 Best Songs About The Weather of All Time 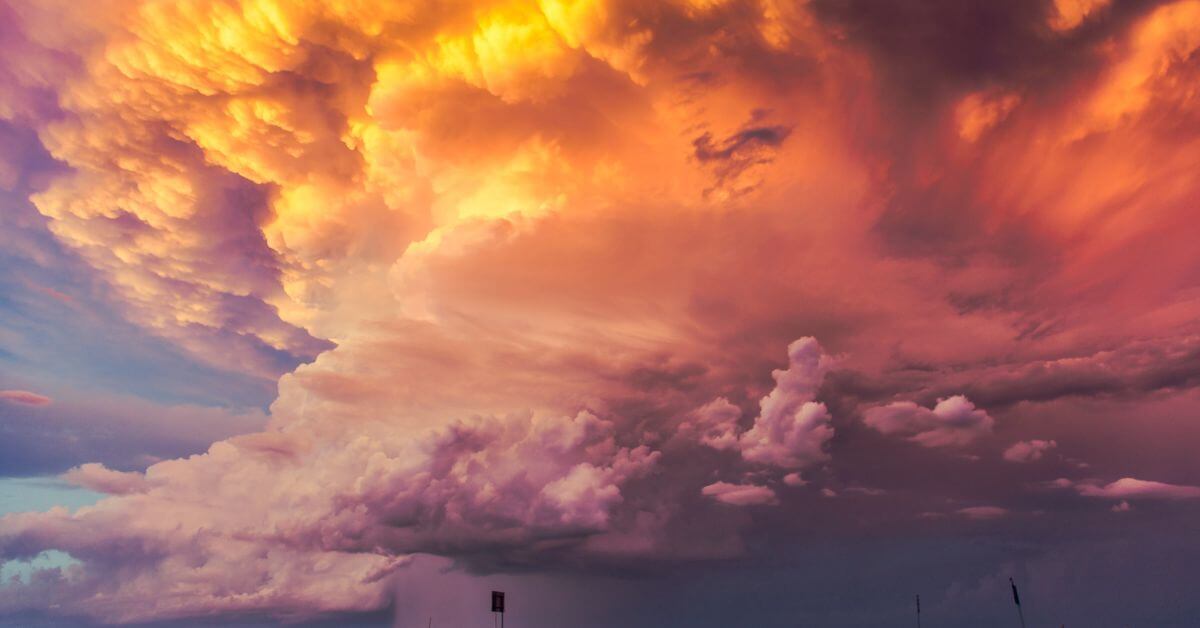 Weather is an interesting topic to talk about.

And many artists can’t resist taking inspiration from Mother Nature from time to time.

From The Beatles giving us hope in their “Here Comes The Sun” hit to Hunter Hayes comparing his woman to a vicious storm, there are countless songs with weather in the title.

Below, you will find the 30 best songs about the weather to resonate with every experience you might be going through right now.

We’ve compiled a list of weather songs about sunshine, rainfall, storm, wind, and thunder to help you create the ultimate playlist.

And let’s start with an epic ballad.

At this moment, the addressee still shows signs of unhealed wounds from the past relationship.

And a lot of obstacles to be overcome.

But Axle Rose encourages his lover to keep pushing because they share the same feelings.

The song reached #3 on the Billboard Hot 100 chart.

“Rock You Like A Hurricane” is the ultimate rock anthem about sexuality.

It was one of the most successful songs by the German rock band.

Neil Young is obsessed with a certain girl in his 1977 rock song.

He’s absorbed by her calm soul, just like a hurricane.

And he gets more attracted to her every time they are together.

4. “The Rain Song” by Led Zeppelin

Led Zeppelin’s song is a blend of sad emotions and happiness.

It is a song about love and the changing emotions around it.

It covers the freshness of new love to intimacy, stagnation, and sometimes, heartbreak.

The mellow tune with a reflective vibe is just what you need when going through different emotions.

It is one of the few man anthems from the 80s, sung from a woman’s perspective.

The blend of disco and R&B elements made many people fall in love with the hit.

Bruno Mars cuts a lonely figure in this song.

He can’t imagine his life without his lover.

And he would do anything to never let that happen.

The song covers the anguish of heartbreak and loneliness.

7. “Have You Ever Seen The Rain” by Rod Stewart

Rod Stewart is asking if you’ve ever seen the rain.

Not to be confused with a love song or one of those happy tunes, Stewart’s confession is about a sad departure.

It is about his brother’s separation from the band members.

But sunshine only comes after the rain.

So, Stewart is convinced everything will be fine.

“Colder Weather” is one of the widely known winter songs.

It describes the experiences of a romantic couple, where one is always on the road.

Of course, it’s easy to associate the lyrics with Zac’s personal life, given he was constantly away from his lover.

But it’s all because of his vocation, and you can’t blame him for that.

Rihanna might have relaxed from producing new music in recent years, but many fans still appreciate the hits from her early days.

In her “Umbrella” song, the singer talks about protection.

Riri explains that “an umbrella is protection, it protects you from rain. The rain in this case is negativeness and vulnerability.”

So, you got the meaning right there.

It is the song for all the strong individuals in your life.

10. “Blame It On The Weatherman” by B*Witched

You better find someone to blame when things don’t work out in your relationship.

That’s quite literally the meaning of the song’s title.

The narrator can’t understand why she had to break up with her boyfriend.

But here she is again, out on his own.

She will blame it on the weatherman, anyway.

The song peaked at #1 on the UK Singles Chart and was certified silver in the same country.

11. “Gust Of Wind” by Pharell Williams

She lifts him and makes him a better person.

He compares her lover to a gust of wind.

This might be one of the most romantic songs about weather.

“My heart is filled, with love and care/Not an ounce of gas, I would get up there/The answer’s simple/You lift me up.”

Sammy Cahn’s “Let It Snow” has become a Christmas staple.

Despite no clear mention of the holiday, the song’s winter theme makes it a perfect option for the occasion.

Many artists have covered it, from Frank Sinatra to Dean Martin and Jessica Simpson.

This song was part of the English rock band’s 2009 Humbug studio album.

And it is about falling in love with a bad girl.

At first, everything is great, and they enjoy each other’s company.

But as the girl’s deranged personality becomes more apparent, the singer hates her.

It is one of the best pieces ever recorded by Alex Turner.

Hunter Hayes talks about a girl who has crushed in his life like a storm.

In other words, he’s blown away by everything about the girl, from her beauty to her energy and spirit.

Strong women can transform your life, always coming onto the scene like a hurricane.

Hayes knows the woman will probably not stay in his life forever.

But he’s willing to take the risk.

A hurricane is known for nothing but its destructive power.

And the title is used figuratively to reference the psychological battles in our minds.

It is more about self-reflection, where you come to terms with your opinions and choices in life.

“Riders On The Storm” complimented The Doors’ LA Woman album.

It is a song about a serial killer on the road, and it reached #14 on the Billboard Hot 100 chart.

It was also the last song recorded by Jim Morrison before his death.

One of the greatest songs about weather goes back to as early as the 1950s.

While many artists associate rain with sadness, Gene Kelly takes a jubilant approach.

He sings and dances in the rain, presumably showing that not everything in Hollywood is as it appears.

Today, “Singin’ In The Rain” means remaining optimistic in the face of life’s troubles.

18. “Sunny Afternoon” by The Kinks

Another 60s classic by a decorated English rock band.

The Kinks’ “Sunny Afternoon” describes a man in trouble with the tax bodies.

His girlfriend has also left him.

Maybe it’s time to enjoy the sunny afternoon in his home, reminiscing about the good old days.

19. “Love Is Like A Heatwave” by Martha and the Vandellas

Some people talk about butterflies in the stomach.

But for Reeves, this one guy makes her feel heat waves all over her body.

The classic love song was written by Holland-Dozier-Holland and sung by the Motown vocal group.

It went straight to the top of the US Billboard Hot R&B chart, staying there for four consecutive weeks.

And it talks about making the best of cold weather.

There are many versions of this song.

But Frank’s magical vocals make you forget all the negativities in the cold weather.

A scorned woman is as dangerous as a tornado.

And when she comes seeking her revenge, it’s almost impossible to stop her.

Those are the sentiments in Little Big Town’s country song, dominated by drum loops and bass guitar.

This is probably the least common of all of Bob Dylan’s songs.

But it is still a brilliant piece about weather.

Some versions believe Dylan’s song is about the flood in the apocalypse.

But you can listen to it to get the most accurate interpretation.

23. “Raindrops Keep Falling On My Head” by B.J. Thomas

Many people know the song from the movie ‘Butch Cassidy And The Sundance Kid.’

And it’s a must-listen if you love the film.

The upbeat tune is about facing your problems with optimism.

And it’s one of the best songs about the weather.

Garth Brooks talks about a rare storm that many people can associate with.

It’s the storm that rocks many marriages; infidelity.

The abusive partner in the song is the epitome of a troubled union.

A theme of domestic violence dominates the music video.

Hamilton’s banger is a contemporary song about weather.

And the singer recounts his childhood experience involving a tropical storm in the Caribbean.

The song is a blend of facts and fiction.

And Hamilton talks about an actual hurricane and a personal struggle compared to the vicious storm.

Prince’s song symbolizes the end of the world in the company of the one you love.

Here, the singer is seeking divine intervention during the apocalypse.

The song and the entire album (of a similar name) catapulted Prince to the highs of the music charts.

And it’s hard to talk about 80s rock without mentioning the hit.

Depression was a common theme in 90s rock music.

And many artists used the ‘rain’ title to express the feeling.

Blind Melon took everyone by storm with this one, conveying the sentiments of depression and loneliness.

It enjoyed international success, topping the charts in Canada while peaking at #8 in Australia.

One of Gordon Lightfoot’s best-ever compositions covers a beautiful story.

It speaks about a man watching a Boeing 707 plane take off from the airport.

The rainy morning adds context to the lyrics as the narrator ponders his life.

Many artists have covered the 1966 tune ever since.

“Blowin’ In The Wind” is Bob Dylan’s 1963 song from his The Freewheelin’ Bob Dylan’ album.

It describes many topics, including wars, peace, and humanity.

The song has plenty of wisdom that will have you marvel at Dylan’s lyrical prowess.

And it’s only befitting that it was ultimately inducted into the Grammy Award Hall of Fame.

How do you handle heartbreak?

Just blame it on the rain, according to the German pop duo.

Of course, that never works.

But the rain is a mere excuse for why the relationship didn’t work.

It’s a lighthearted tune that captures many people’s emotions.

And would be a great addition to your playlist of songs that mention the weather.

Bill Withers revived his career with this one.

It is a simple song with moving lyrics and has been a timeless classic.

The 1962 movie, ‘Days of Wine and Roses’ inspired the lyrics.

And the hit won a Grammy award as the Best R&B Song.

“Dust In The Wind” is hauntingly beautiful.

It is an excerpt from the bible about mortality and vanity.

No matter our accomplishments, nothing makes sense in the end.

And we will all be swept away from the surface of the earth, just like dust in the wind.

It’s no secret many people relate to the song’s lyrical message.

This is a song about happiness.

It captures the ecstatic feelings of attending a music concert.

It is one of the most upbeat tunes on this list.

And this is a song for when you want to get over the bad times.

The song’s lyrics align with the “light at the end of the tunnel” adage.

And they give you hope when you need it.

35. “Walking On Sunshine” by Katrina & The Waves

The last song on our list is about optimism.

It is one of those tunes to spread feel-good vibes around the world.

Walking on sunshine is only comparable to the feeling you get when deeply in love.

Listen to the positive lyrics to lift your spirits.

The weather has more power over our lives than we imagine.

And if you still doubt the power of Mother Nature, try going outdoors on a gloomy, rainy morning.

It’s little surprise that many artists have found inspiration from these experiences to write compelling songs about weather.

So, the next time you are heading to the beach, create a playlist that matches the occasion.