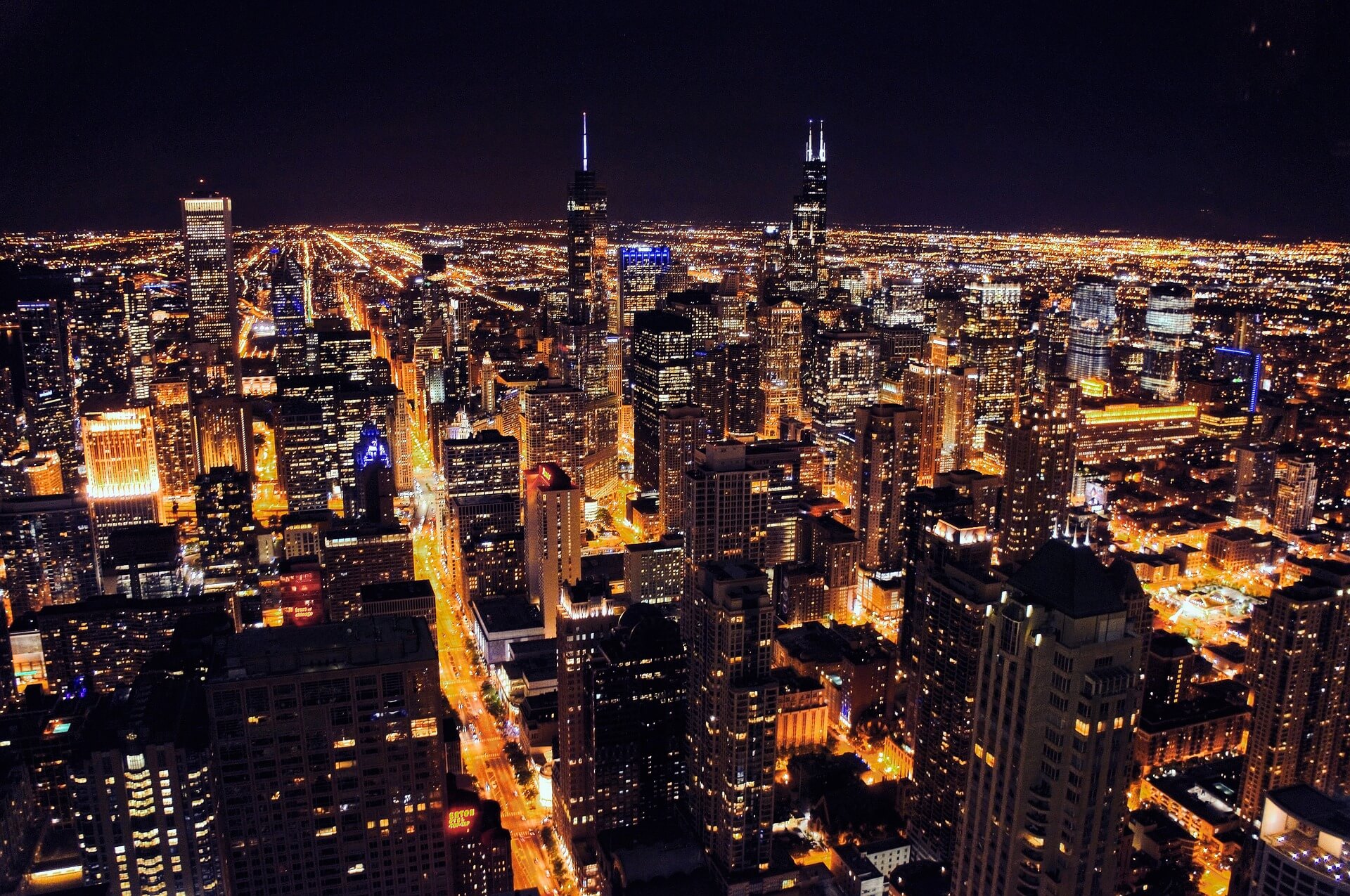 Chicago is one of the cities that keeps inspiring artists and musicians.

And the evidence of that is a large number of popular songs about Chicago.

For today’s article, we selected the 20 best songs that mention Chicago.

You’ll come across different genres and artists, from Sufjan Stevens to Chris Rea.

But all of these artists have one thing in common: they all hold a special place in their hearts for the Windy City.

“My Kind Of Town” is probably the most iconic song about Chicago.

It’s the combination of Sinatra’s timeless charm, feel-good melodies, and a mention of everything that makes Chicago such a great city.

“Each time I roam
Chicago is calling me home
Chicago is why I just grin like a clown
It’s my kind of town.”

Sufjan Stevens wrote hands down one of the most beautiful songs about Chicago.

He released it on his 2005 studio album “Illinois.”

The song talks about leaving everything behind and starting again, and it feels very genuine, uplifting, and sentimental.

Aretha Franklin didn’t grow up in Chicago, but she had many ties with the city.

In fact, she got the name “Queen of Soul” in Chicago.

She also appeared in the Chicago-based film “The Blues Brothers” where she performed her unforgettable hit “Think.”

“You better think (think)
Think about what you’re trying to do to me
Yeah, think (think, think)
Let your mind go, let yourself be free.”

“Take Me Back To Chicago” is a dream of simpler times, a warm summer breeze, and familiar streets.

It’s one of the popular Chicago songs released in 1985 on the band’s compilation album of the same name.

“Take me back to Chicago
Lay my soul to rest
Where my life was free and easy
Remember me at my best.”

Ryan Adams’ “Dear Chicago” is a heartbreaking song about past loves and comforting cities.

It’s one of the songs that mention Chicago in a very sentimental way.

“Dear Chicago,
You’ll never guess
You know the girl you said I’d meet someday?
Well I got something to confess”

This list wouldn’t be complete with the Chicago Bulls song.

Although “Sirius” wasn’t intended to be a basketball introduction song, it’s been an opening line up music since the Michael Jordan era.

“Chicago At Night” is one of the alternative Chicago themed songs.

It has a touch of mystery and anticipation, so it’s a good song for exploring Chicago at night.

“But then she’d never been to Chicago at night before the fall
And it don’t stop not at all
It falls all around
In the city
Hits the ground.”

In a way, “Meet Me In Chicago” captures the essence and charm of Chicago.

The song mentions all the essential spots, and it will make you want to visit them right away.

This blues classic was first recorded by Robert Johnson in 1936.

It’s one of the famous songs about Chicago, and many artists recorded a cover version, including Eric Clapton.

But there’s something about The Blues Brothers’ version that makes us wanna dance in a bar somewhere on The Magnificent Mile.

Maybe Allister’s music is more to your liking.

They dedicated “Somewhere on Fullerton” to their hometown.

The song is full of youthful energy, early 2000s rock vibes, and nostalgic lyrics about Chicago.

“Somewhere down in Fullerton
There’s a place we used to go
To get away from it all.”

“In The Ghetto” is one of Elvis Presley’s songs that mention Chicago.

It’s a powerful song with heartfelt lyrics and a dreamy, sentimental melody.

“As the snow flies
On a cold and gray Chicago mornin’
A poor little baby child is born
In the ghetto.”

It’s a captivating blues track that will transport you to the streets of Chicago.

You might also find yourself having a drink in Kingston Mines.

“Via Chicago” is a rather nostalgic song about Chicago and life challenges.

The song starts peacefully, and becomes more intense towards the end.

“But the wind blew me back via Chicago
In the middle of the night
And all without fight at the crush of veils and starlight.”

When it comes to alternative songs with Chicago in the title, Sun Kil Moon’s 2012 track definitely deserves a mention.

“Sunshine in Chicago” is a soothing song with dreamy indie vibes and peculiar lyrics. It’s exactly what you need.

“Sunshine in Chicago makes me think about my dad
It was eight or nine siblings I am told that he had.”

“This City” is the first single from Patrick Stump’s (Fall Out Boy vocalist) debut solo album.

It was Stump’s way of paying tribute to his hometown.

And you can really feel his pride, especially because of the lyrics.

“‘Cause this city is my city
And I love it, yeah, I love it
I was born and raised here
I got it made here
And if I have my way, I’m gonna stay here.”

“Chicago (We Can Change the World)” refers to anti-Vietnam war protests.

So, it’s a song with a rather serious message and a positive idea: we can change the world.

“Won’t you please come to Chicago for the help that we can bring
We can change the world rearrange the world.”

The band claimed that the lyrics of the song aren’t drug related. Therefore, it’s one of the Chicago city songs about the local lakefront driveway.

And it’s a part of the famous Awesome Mix Vol.2 from “The Guardians of the Galaxy.”

If you’re from Chicago and you’re a fan of Chicago Blackhawks, then you know why “Chelsea Dagger” belongs on this list.

It’s the ice hockey team’s song, so it might as well be a Chicago theme song.

It’s an incredibly catchy and uplifting song too.

“Chelsea Chelsea I believe that when you’re dancing
Slowly sucking your sleeve
The boys get lonely after you leave
It’s one for the Dagger and another for the one you believe.”

Whether you’re a fan of Kanye West (sorry, Ye) or not, he recorded one of the best rap songs about Chicago.

He grew up in Chicago and attended Chicago State University for a year, before pursuing a career in music.

So, his love for Chicago is real.

Well, he named his daughter Chicago too.

The Chicago music scene has always been known for blues.

The message of “Chicago Bound” is pretty clear:

It’s time to wrap it up.

We hope you enjoyed our selection of the best songs about Chicago.

It wasn’t an easy task though. When you dig deeper, you realize how many Chicago themed songs there are.

In a way, both citizens and visitors seem to be mesmerized by this city.

So, whether you’re traveling to Chicago or you’re nostalgic about your hometown, this playlist can put you in a Chicago state of mind.