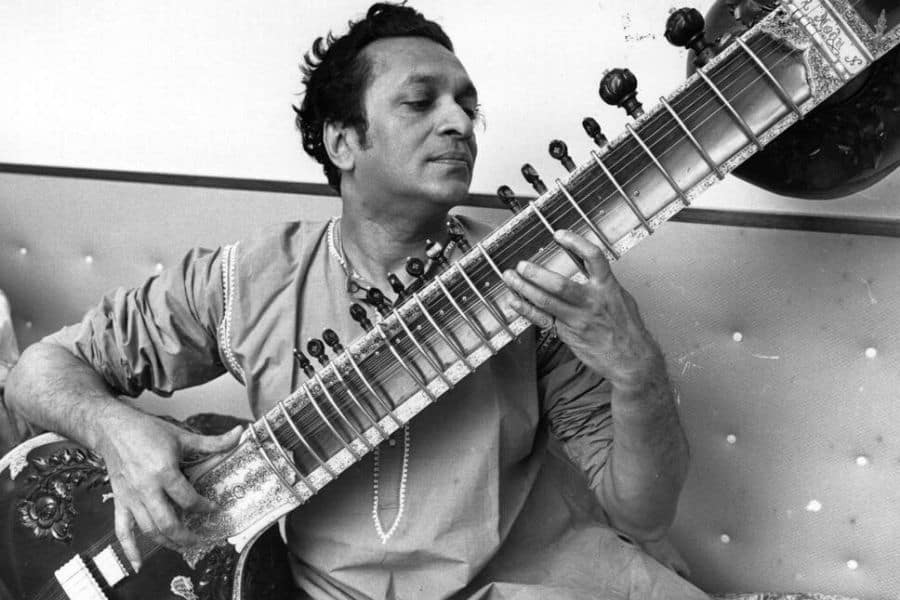 A plucked string instrument that comes from India, the sitar is utilized in Hindustani classical music. The device was invented in medieval India and prospered in the 16th and 17th centuries. It reached its present configuration in 18th-century India.

Extensively used within the subcontinent of India, the sitar became widely known worldwide via the efforts of Ravi Shankar, around the late ‘50s and early ‘60s.

During the 1960s, a short-term fad emerged for the inclusion of the sitar in mainstream Western music, and it was featured in songs by famous recording artists such as The Doors, the Rolling Stones, and The Beatles, among others.

The term ‘Sitar’ comes from the Persian ‘she’ and ‘tar,’ which means “three strings” literally.

The old musical instrument Veena is the forerunner of the sitar. Amir Khusrow, a famous poet and Sufi inventor (pioneered the Qawwali, Khyal, and Tarana), is known to have developed and based the sitar on the Veena during the thirteenth century.

A sitar has 18-21 strings. Only six or seven of those strings are ‘played strings’ that run over curved, raised frets. In contrast, the remaining strings are ‘sympathetic strings’ (called a tarb, tarafdaar, or taarif) that run beneath the frets then resonate in support of the strings being played.

These strings are commonly utilized to establish a raga (melodic mode or framework) at the start of a performance.

The frets, referred to as ‘thaat’ or ‘pardā,’ are adjustable to enable fine-tuning. The played strings are attached to the tuning pegs located at or near the instrument’s head.

Meanwhile, the sympathetic strings, each having different lengths, go through tiny holes in the fretboard to connect to the tuning pegs that line along the neck of the instrument.

The sitar has two bridges: a big bridge (badaa goraa) supporting the drone and playing strings and a little bridge (Chota goraa) holding the lesser sympathetic strings. The sitar’s resonance results from how the strings hit the broad, sloping deck.

When a string vibrates, its length varies minutely as the edge contacts the bridge, enabling harmonics production, thus creating the sitar’s unique tone.

Achieving this particular tone is influenced by the bridge’s shape in a process called jawari. It is a highly specialized procedure, and most musicians depend on extremely skilled instrument makers to accomplish this.

Materials used in manufacturing a sitar include Cedrela toona (tun wood – a mahogany variant) or teak wood for the faceplate (tabli) and neck; then, calabash gourds on the resonating compartments.

The sitar’s bridges are fashioned from ebony, deer horn, or occasionally from a camel’s bones. However, due to technological advances, synthetic materials are now commonly utilized as well.

There are two prominent contemporary sitar models which are manufactured with intricate decors and numerous style variants. These are 1, the fully ornamented “instrumental style” sitars (other times known as “Ravi Shankar-style sitars”), and 2, the “gayaki-style” sitars.

The ‘instrumental style’ is usually crafted from weathered toon wood and other times constructed from Burma teak. Some models come with a little Tumba (a wooden replica of a pumpkin) near the neck that serves as a back-up resonator.

This style is fully ornamented, with grape or floral carvings. It also has celluloid insets with red/brown and dark arabesque or floral patterns, and usually contains thirteen secondary strings.

A widely known fact claims that the best sitars are wrought from Burma teak seasoned for years. That is why instrument makers search for ancient Burma teak to create special sitars. The most sought-after Burma teak comes from old colonial-style lodges, the columns of which comprise of whole teak trunks.

Because of the rare nature and scarcity of supply, the sources of this seasoned wood is a strictly kept trade secret, or occasionally, even a mystery.

There are several further style cross mixes and sub-styles in sitars that highly depend on customer preferences. The most significant of these are different for the positioning preferences of Taraf (sympathetic string) pegs.

The different sitar styles include master models, pro-models, semi-pro styles, beginner models, student styles, and more. Prices are usually dictated more by the manufacturer’s name, instead of aesthetics or the type of material used.

Tuning is contingent upon the sitarist’s tradition, style, and the artist’s personal preference. The first playing string is practically consistently tuned exactly a fourth higher than the tonic, while the second string is tuned on the tonic with precision.

The solfège system’s tonic is known as ṣaḍaj, its dialectical modification, kharja, and ṣaḍja or the shorter sa. The flawless fifth, pañcam, is where they pitch several drone strings.

The player needs to repeat the tuning process for every raga. The secondary strings are typically tuned by turning the pegs carefully. The key ‘playing strings’ are slid on every string’s threaded bead to set the pitch. These strings are underneath the bridge.

In a number of the more general tunings (employed by Ravi Shankar known as “Kharaj Pancham sitar”) the playable strings are strung this way:

These tunings have a lot of stylistic variations incorporated, and similar to many Indian string instruments, they do not have a default tuning. Most of the time, adjustments differ by Gharana (schools of learning) and the particular musical piece.

How To Play Sitar

The sitar is placed between the player’s right knee and left foot, which frees the hands and avoids the need to support the instrument’s weight. The player plucks the string with a golden plectrum or a pick known as a mizraab, while keeping the thumb fixed at the tip of the fretboard, slightly above the central gourd.

It is interesting that, due to the sitar’s adjustable frets, occasionally, a fret may be pre-set to a particular microtone, and thus no bending is required. Expert players convey charisma through the adoption of extraordinary techniques like Zamzama, Murki, Krintan, Kan, and so forth.

The sitar surely is an excellent traditional Indian musical instrument that has captured the world with its hauntingly unique and beautiful sounds. The distinct tone of the sitar brings the ancient and exotic history of the Indian subcontinent into the fold of the 21st century.

Interested in other Indian musical instruments? Check out my article about the harmonium!

5 Best Flamenco Guitarists of All Time