Harmonium: Everything You Need To Know 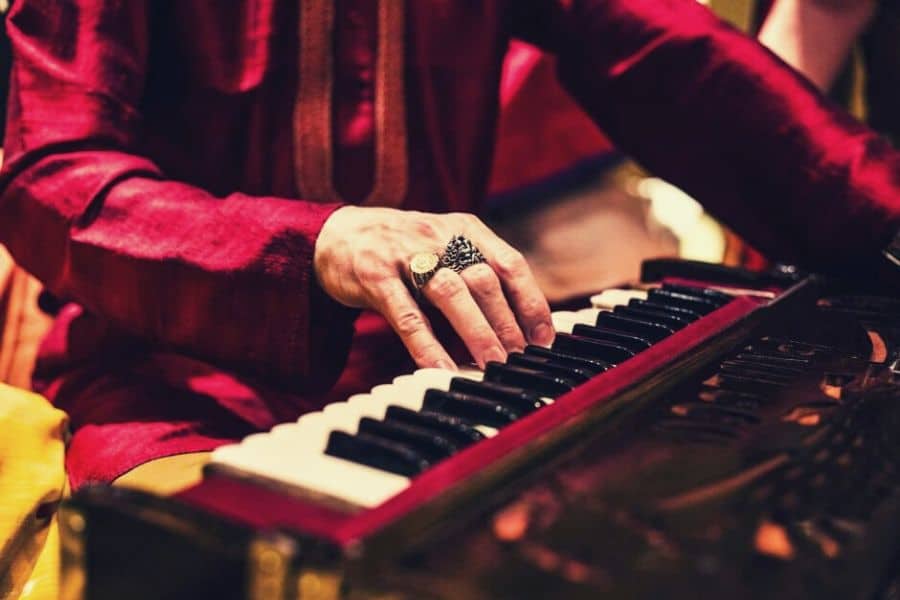 The harmonium, although perceived to be an Indian musical instrument, was imported to India from the West. It is currently the most popular free-reed aerophone instrument on the Indian subcontinent.

It is used in different mediums like classical music, folk music, and even films. No other imported musical instrument has ever been so integrated with the musical culture in India.

Some even think of the harmonium to be the most commonplace musical instrument in Northern India.

The History of the Harmonium

It’s unclear who exactly brought the harmonium to India in the first place. Historians assume it was brought to India before the twentieth century, either by merchants from the West or by religious missionaries and musicians.

They further believe that Calcutta, currently known as Kolkata, was the first place where the harmonium was introduced and spread all across India from there. Since then, this pump organ has been a central part of Indian music irrespective of genre.

The harmonium was initially similar to the piano. It had many more keys than it does now. It even included a foot pump and a chair.

After being introduced in India, the harmonium evolved to get rid of the foot pump which was replaced by a hand pump mechanism. Moreover, the number of keys was reduced. Also, the size of the instrument was made significantly smaller than before, for portability and playing comfort.

The hand pump version was critical for the success of the instrument in India, as Indian musicians had a tradition of being seated on the ground when they performed.

The central part of the musical instrument is a keyboard which is similar to that of a piano. It has a smaller range of three octaves in most cases. The keyboard is played with one hand, and the other hand controls the bellows (hand pump).

The bellows regulate wind supply, and the length of free reeds in the bellows determines the pitch of the instrument. This hand pump works with the help of a valve-like mechanism that produces and controls the passing air, in turn, controlling the volume.

This combination of the hand pump and the keyboard makes the harmonium a very easy to play and convenient instrument. Another thing that this free-reed organ had going for itself was that it wasn’t affected by heat or humidity, which was a matter of concern for the piano.

The harmonium reached peak popularity in the 1900s. This was also the time when different versions of the instrument were being produced.

Both small, simple, and large complex harmoniums were being created at the time. Some were even built with two keyboards and an electric pump.

During the 1930s however, it started losing popularity in the West due to the invention of electric organs.

Despite that, the harmonium kept soaring in popularity in India. To this day, they still maintain their legacy in the more significant part of South Asia.

Different components work together to produce sound or music from a harmonium. The main components are:

The Use Of Harmoniums In a Cultural Context

Harmoniums gained a lot of popularity in the West after John Lennon used it in the hit Beatles song “We Can Work it Out” in 1965.

However, back in India, it was mainly used for religious devotion songs by the Hindus and Sikhs. These devotional songs or hymns were called “Kirtans” back then.

Some of the very famous Kirtan musicians were Jai Uttal, Snatam Kaur, and Krishna Das. They received global recognition for their talents.

Alongside Kirtan music, the instrument became prominent in different genres of Indian music. A notable use of the harmonium is observed in Hindustani classical music, Marathi, and Parsi state music.

Musicians from different parts of India in the late 20th century also preferred the harmonium as their primary music instrument. Moreover, since the harmonium supported group singing and had audible sound, it also became an integral part of the Sufi Qawwali genre.

Harmoniums have evolved into extraordinary instruments, with sophisticated air pumps, in-built, filters, and a lot of playing dynamics.

I wouldn’t say that the device is extremely easy to play, but with a little bit of dedication, anyone can master it and enjoy its many wonders!

Interested in other Indian musical instruments? Check out my article about the sitar!

Handpan: Everything You Need To Know