5 Best Flamenco Guitarists of All Time 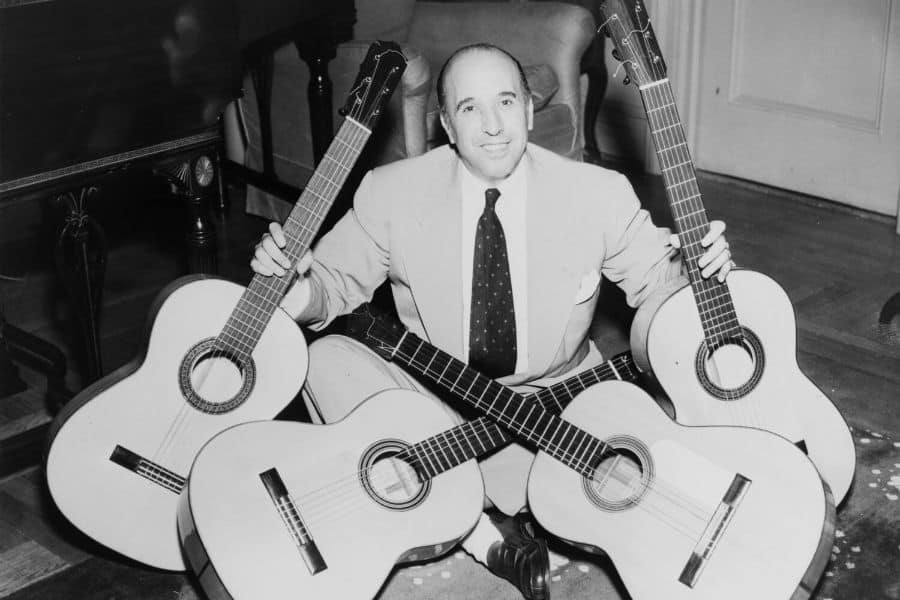 Flamenco is a world-renowned song and dance art form that was developed in southern Spain. Later, it also became famous for its instrumental arrangements, primarily with the flamenco guitar.

Although it’s been the subject of many debates, there’s a widely held belief that flamenco’s mysterious origins can be traced back to a millennium in Andalusia and Murcia during the Arab occupation of the southern Iberian Peninsula.

What resulted was a unique fusion of musical influences from different intermingling cultures. Much of what we know as flamenco today was passed down through centuries from stories of gypsy families that have only been documented during the last two centuries.

The Spanish Gypsies are often credited as the “fathers of flamenco.”

The flamenco guitar became an integral piece of the art form during the 19th century as an accompaniment behind singing and dancing. It was only near the start of the 20th century that guitar playing came into its own as a popular form of creative musical expression.

No discussion of flamenco guitarists would be complete without mentioning Ramón Montoya. Through his genius, the flamenco guitar rose from a mere supporting role to “cante” flamenco (singing) and “baile” (dance) and gained prominence as the lead flamenco instrument.

His friend and classical guitarist, Miguel Llobet, opened his eyes to the instrument’s possibilities. Montoya was himself trained in classical guitar but developed a technique with heavy gypsy musical influence.

This fusion of styles in his compositions served as a foundation of modern flamenco guitar playing. It was during his lead and solo concert performances when the guitar’s popularity took off in Spain. Many critics consider him as the flamenco guitar solo’s founder and praise him for his Taranta, Minera, and Rodena styles.

Ramón Montoya’s works and performances established him as one of the great flamenco guitar masters and its most influential innovator in the 20th century. For his pioneering achievements, it’s no wonder why most regard him as the modern flamenco guitar’s founding father.

Sabicas is another flamenco genius whose real name is Agustín Castellón Campos. He started learning to play flamenco guitar at the age of five without the benefit of tutoring. Ramón Montoya inspired Agustín, and he initially followed the great maestro’s style. He made his debut performance only two years later, at the age of seven.

Agustín displayed an extraordinary talent at such a young age and had already developed his technique by the time he was a teenager. Despite that, he didn’t gain popularity even when he became a much sought-after guitar accompanist to famous flamenco dancers and singers.

When the Spanish Civil War broke out in 1936, he left the country and migrated to South America. Later, he came to Mexico, was married, and lived there for a while. He and his family finally settled in New York, where his musical career flourished.

For an extended period, he remained obscure from his countrymen until his albums were released in Spain. Eventually, he became famous for his brilliant guitar work. As Sabicas, he was one of the pioneers that helped flamenco and the guitar get a foothold outside of Spain, especially in the Americas.

Sabicas was a flamenco guitar virtuoso who created original music. Before he found his fame, flamenco was only known in a few circles, but he gained a considerable following once more and more people listened to his version of the art form.

What’s even more amazing is that he taught himself how to play the guitar and studied flamenco independently. No famous flamenco artist influenced him, apart from idolizing Montoya since he was a toddler, and this was evident in his unique and intricate compositions.

His real name was Francisco Sánchez Gómez, and there’s no question that he’s the one who made flamenco a household name worldwide. He was known for his authentic flamenco sound, yet he was also recognized as a ground-breaking experimentalist and pioneer of the new flamenco style.

He had his first encounter with Sabicas in Malaga when he was only 11. His brilliant career started after winning the special award of a flamenco festival in Jerez de la Frontera in 1959 when he was only 12 years old. It allowed him to tour with a flamenco troupe where he eventually found his way to New York.

There, he met Sabicas for the second time, who, together with Mario Escudero, became his mentors and close friends. They advised him to find his own music instead of merely copying or interpreting the work of past masters.

It became a crucial turning point in his life as a musician, and the primary reason he started experimenting with other ways to enhance the art form even further.

He sought to introduce elements from other musical styles like jazz to give flamenco more mainstream appeal. To this end, he succeeded after releasing an album titled Friday Night in San Francisco. He collaborated with fellow guitarists Al Di Meola and John McLaughlin, who were known for their pioneering work in jazz fusion.

They sold over a million copies and catapulted the new flamenco style into the consciousness of mainstream music in Europe and the US. His collaborations with other successful guitarists and musicians up to the late 70s made him one of the most famous and best flamenco guitarists outside of Spain.

In the early 80s, he formed a successful sextet together with his brothers Pepe and Ramón. After releasing some albums, they toured internationally until late in his career.

During this period, he took part in some highly acclaimed performances. He also continued to receive recognition and awards, including being hailed by Billboard Magazine as among the 30 Most Influential Latin Artists of All Time.

His full name is Vicente Amigo Girol, and he started his musical career as an accompanying guitarist on records of famous flamenco singers. He later shifted to producing their albums. Vicente began his solo career in 1988 and won awards in various music festivals.

In 1991, Vicente produced his debut album titled De mi Corazón al Aire (From Out of My Heart) and had since released almost a dozen albums gaining him wide acclaim. His style is famous for being faithful to the traditional gypsy flamenco sound.

His idol when growing up in Cordoba was Paco De Lucía. Later, at the age of 25, he took part in a show with him called “Leyendas de la Guitarra” (Guitar Legends) in Seville.

He’s recognized as one of today’s most prolific flamenco recording artists and has garnered multiple significant awards during his entire career. Most noteworthy was the Latin Grammy he received in 2004 for his album titled Ciudad de las ideas (City of Ideas). It was a recording of a live performance in Cordoba that won the “Best Flamenco Album.”

I round up my list with one of the most gifted modern flamenco guitarists today.

Jerónimo was born into a family with a strong flamenco background and with a Spanish gypsy heritage. He’s a descendant from the line of Maestro Ramón Montoya. His great uncle was a famous flamenco singer named Ricardo Losada el Yunque. Felipe, his father, is also a professional classical guitarist.

Like flamenco legend Sabicas, he started learning guitar at age five. He had his first public performance in Madrid at age seven as part of a concert organized by Cumbre Flamenca. Since he was a kid, he received formal training at the Conservatorio Superior de Música de Madrid while also being instructed by his father.

The young Jerónimo also displayed a knack for composing original music. At the age of 22, he was among those who performed with Enrique Morente and Paco De Lucía in a tribute to Maestro Sabicas at the Carnegie Hall in New York.

After that, he began touring internationally with his own company. In 1999, he gained recognition from Madrid’s Círculo de Bellas Artes (Fine Arts Circle) by winning their Copa Teatro Pavón (Pavón Theater Cup) awarded to talented young artists.

In 2003, he had the honor to perform at the prestigious Queen Elizabeth Hall in London.

In 2004 he produced an album titled Jeronimo, putting his entire musical prowess on display, to which critics declared him as flamenco’s newest star.