10 Awesome Irish Instruments You Should Learn to Play 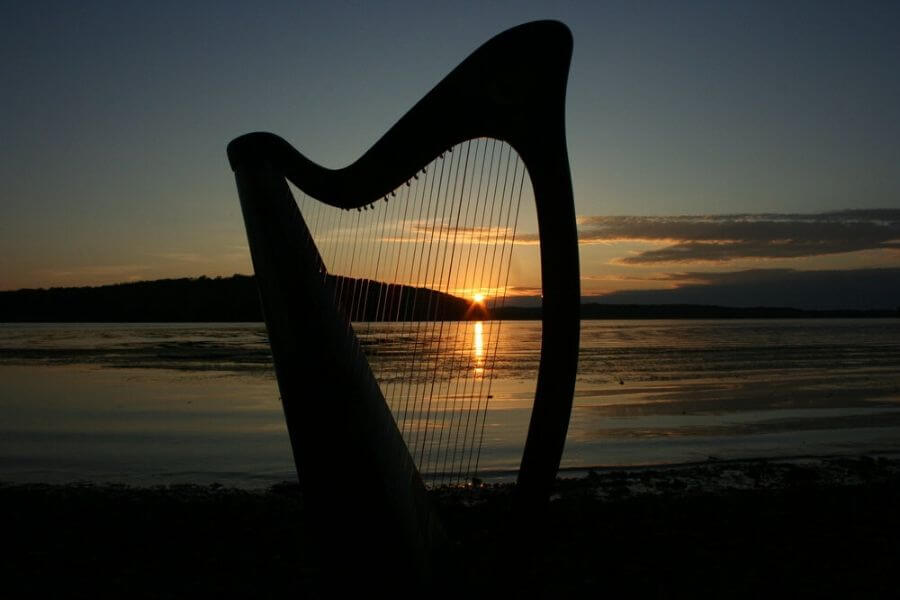 Traditional Irish music is one of the oldest in the world, dating back to the Celts 2,000 years ago. It’s at the heart of Irish culture. Music is a language in Ireland, it’s that integral.

Irish folk music has been used over the years as a way to record and tell their legendary mythical tales and stories.

But more importantly, it brings a nation together. From cozy local pubs where folks gather and play their traditional Irish instruments to the cobblestone streets, the atmosphere is always heartfelt and welcoming.

Director of the Irish World Academy of Music and Dance Dr. Sanda Joyce put its perfectly, “What makes traditional music so special is the strong sense of community it builds. Musicians who don’t know each other at all often play together. It’s all about getting together socially and playing tunes, purely for the enjoyment of it.”

Because traditional Irish music is such a social experience and accessible to all, the popularity of playing Irish instruments has spread worldwide.

Not only do the following Irish instruments offer a rewarding learning experience, but they’re also a great way to learn and connect with a deep-rooted culture.

If you are especially interested in Irish traditional music, the following instruments are a great place to start.

By learning to play an Irish instrument, you’ll be learning about and connecting with an Irish culture largely based on pride, passion, and community at the same time!

10 Irish Instruments You Should Learn To Play

The fiddle is essentially an Irish violin. Like a violin, it is small, bow-shaped, and has strings fastened on both ends.

The playing style and sound of it are what set it apart from the violin.

A classically trained violinist is unlikely to perform folk music, whereas a folk musician is most likely not going to play classical music!

It’s one of the most popular Irish string instruments, and is usually, the primary instrument used in traditional Irish music. Its sound is one of the most recognizable and easiest to distinguish, being high-pitched and expressive.

With lots of room for interpretation and experimentation, fiddle playing is lively and remarkably expressive. A talented fiddle player with the ability to pick up tunes by ear is highly sort after and appreciated.

Unfortunately, the fiddle is not the easiest instrument to learn, one of the reasons being that it lacks frets which mark the notes, as seen on a guitar.

However, with a bit of passion and dedication, learning to play the fiddle is not out of reach, and will certainly add a big boost to any music or pub session! Check out our list of the best online fiddle lessons here!

This Irish instrument is as old as the hills, well not quite, but dates back to the beginning of the 5th century. Similar to Scottish bagpipes, they are commonly referred to as bagpipes but the name uilleann actually means “pipes of the elbow.”

The meaning was drawn from the playing style since the instruments have pump-operated bellows. They produce a very loud sound and were originally used for troops marching into battle.

Interesting fact: Uilleann piping has been inscribed on the Representative List of the Intangible Cultural Heritage of Humanity by UNESCO.

The Celtic harp is one of the most prominent symbols of Ireland and traditional Irish instruments. It has an exceptional place in both the music and history of the country. Hence, its presence on Irish coinage, and of course, Guinness advertising!

The Celtic harp has been played from as early as the 10th century. Harpists were highly regarded and respected in ancient times, as harping was a very aristocratic form of art music, often accompanying poetry. Harpists would even be invited to ride out with their patrons on journeys and visits, at hand available to play music.

Nomadic harpists would also travel throughout Ireland performing for the locals in return for shelter and food.

The high king of Ireland Brian Boru is one of the earliest masters in playing the harp. In fact, the Brian Boru harp is on display in the long room at Trinity College in Dublin.

Although it has long been claimed to be the harp of Brian Boru, the harp actually dates from the fourteenth or fifteenth century.

There are many types of harp that differ in size, shape, and sound. It’s a challenging instrument to learn as it requires commitment and patience, but once mastered, it has a wonderful fairytale-like sound.

Because of its soft melody, it adds a musical texture that soothes the soul.

The bouzouki is native to Greece but was brought to Ireland in the early 1960s. Johnny Moynihan, who is a Dublin-based musician, was the first to introduce the instrument to Irish music.

The bouzouki is an eight-string instrument that resembles a giant mandolin and functions similar to a guitar. Its typically played rhythmically in line with the melody, rather than taking the lead.

But it’s not uncommon for the Irish bouzouki to take the lead occasionally, producing a rich and bright sound perfect for any traditional Irish music session.

The bodhrán, pronounced “bow-rawn,” is the core and heartbeat of traditional Irish music. This Irish instrument is a large, handheld drum that is covered with stretched goatskin. The drum is very light in weight to facilitate portability.

It’s played using a small double-ended stick called a beater (or sometimes a cipín or tipper), which is the size of a pencil. These sticks were traditionally made from double-ended knucklebones, and are used to beat the bodhrán in a fluid, swinging kind of motion.

Some believe that when the bodhrán was not used as a musical instrument, it was used as a grain sifter or grain tray!

The bodhrán is relatively easy to play and is one of the only dedicated rhythm Irish instruments, with fans from across the globe. For some inspiration, check out some of the most popular players, Caroline Corer, Gina Lupari, and Christy Moore.

The tin whistle enjoys its fair share of popularity. In most primary schools across Ireland, the instrument is learned from a young age since it’s readily available and easy to learn.

This popular Irish instrument has many nicknames, including the Irish whistle, Belfast hornpipe, pennywhistle, feadóg stáin, or the flageolet.

It’s often praised because it’s so simple to make. Before they were made of tin, the six holed, tapered tube was made from bone, which seems like a lot more hard work!

A tin whistle is known by its signature thin and high-pitched sound. Geraldine Cotter is one of the most popular players known in history.

If you’re looking for the least expensive of Irish wind instruments and most readily accessible one, the tin whistle could be for you!

The low whistle is just another type of tin whistle but larger and producing a different timbre. The sound produced by this Irish wind instrument is lower in pitch and tone and more mellow sounding than its sister.

It is however played in the same way by blowing air into the instrument and varying the tone by closing and opening the holes. Although many find it less agile for session playing when compared to the ordinary tin whistle.

One of the most well-known instruments of Irish music, the Irish flute dates back to the early 1800s but has since been a significant part of Irish music culture.

One of the main differences between a modern flute and the Irish flute is that the latter is normally made from wood, predominantly used in Irish folk music. Musicians who prefer the wooden made flute enjoy the earthy and natural tones when compared to its modern steel counterpart.

A flute is played by blowing air across the mouthpiece rather than into the instrument. The sound is then varied by covering and releasing the holes. A flute starts with a windy sound which is followed by mellow toned notes.

It can be challenging to tell a flute and low whistle apart since both have a low tone. However, the low whistle has a simple low tone while the sound produced by a flute is velvety and sweet to the ear.

Again, if you’re looking for an Irish instrument to learn, the Irish flute is a great option due to its simple playing mechanism and wide availability. Check out our list of the best online flute lessons here.

Believe it or not, both of these instruments were popularly used in music up until 1844. However, after that, they settled into Irish folk music and left the mainstream.

These instruments are collectively referred to as squeezeboxes since they are box-shaped and produce sound by squeezing and releasing them.

The instrument has buttons that articulate the melody when simultaneously pushed. These buttons are operated using the right hand while the left hand operates buttons which vary the bass. The instrument is designed using free reeds which are activated by the buttons.

The piano accordion, a variation of the traditional accordion is one of the most popular instruments in Irish music. It is very versatile and can be played unaccompanied, but also marries well with other instruments.

The concertina is structurally different from the accordion as it’s hexagonally shaped. Unlike an accordion where a button activates 2-4 reeds, each reed is activated by its own button on the concertina, usually having around 30 buttons in total.

The sound produced by concertinas is thinner and not as rich as that of the accordion, and typically played within single clear notes, instead of the chorus commonly associated with the accordion.

Overall, the concertina is a great inexpensive option if you’re interested in learning a traditional Irish instrument!

Last but not least, the banjo is one of the most prominent Irish folk instruments and has been integral to Irish traditional music since the early 20th century.

It was brought to Ireland by emigrants returning from the United States, where it was widely played by African slaves. Some slaves even taught their masters how to play it.

The banjo has a circular body that is generally made from wood. It comes with four, five, or six-string versions, but the four-string tenor banjo is the most common in Irish folk music.

Because the banjo is rarely strummed in Irish music, it is mainly used as a melody instrument, played using a plectrum or a thimble.

If you’re interested in learning how to play the banjo, check out our list of the best online banjo lessons.

Over the years, traditional Irish musical instruments have been appearing more and more in popular music.

Artists such as Sinéad O’Connor and Flook to Daithí and Dropkick Murphys have found a way to incorporate traditional elements into their own work, and at the same time make it appealing to the masses.

One thing that remains true, Irish music still brings people together to this day.

By learning how to play an Irish instrument, you’re not only rewarding yourself, but you’ll join a community that finds enjoyment and fulfillment in sharing a part of a rich culture that brings joy to so many!

How to Play Cajon: Everything You Need to Know