Handpan: Everything You Need To Know 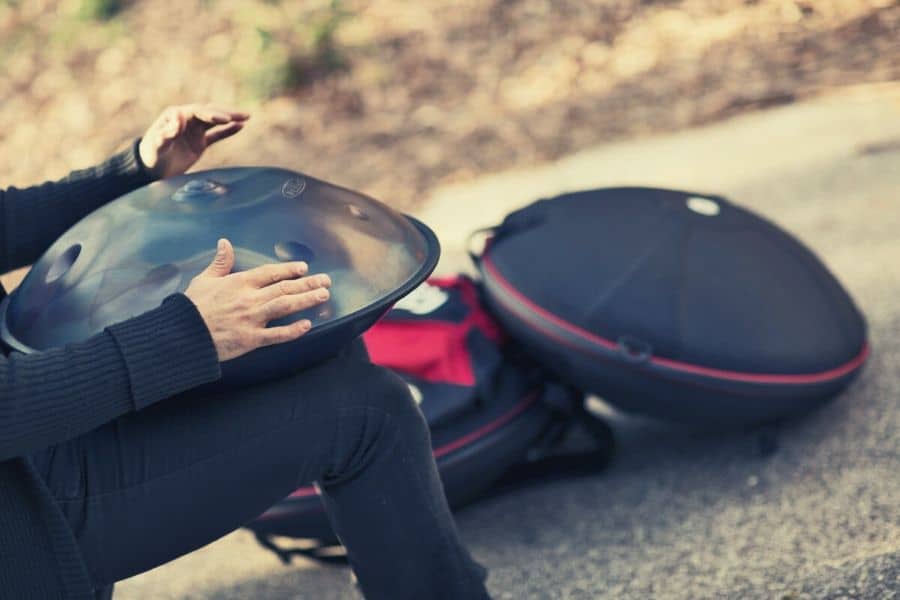 Handpans came about during the 21st century, and the instrument caught on instantly. Even though the community of players is considerably smaller than other mainstream instruments, it’s popularity is growing fast!

They can be used in all types of music, but are often played as solo instruments. The shape of a handpan is similar to that of a turtle shell or like a UFO, which makes it nimble but provides a lot of surface area to play.

The hollow spacing inside allows resonance and depth. The instrument is great for improvisation, and players can be spontaneous with their techniques and invent new ways to create melodies – the possibilities are limitless!

Handpans don’t have a lot of dynamics and the different points on the surface resonate in various ways when tapped. But that’s about it. The instrument is fragile and needs tuning now and then. But the versatility and the exoticism makes the handcrafted instrument an art piece and a remarkable sound producer.

What Is A Handpan?

The handpan was first invented in 2000 by Swiss inventors, Felix Rohner and Sabina Scharer. The manufacturing company, PANArt, is located in the federal city of Switzerland, called Bern. Initially, the instrument was named the “Hang or Hang Drum” by PANArt.

By 2007, other manufacturers tried to tap into the market by creating their versions of the hang drum. Pantheon Steel was the second manufacturing company to come up with their hang drums, and named it the “handpan.” The brain behind the reinvention was Kyle Cox.

Other names for the Hang or handpan include pantam, hang drum, spacedrum, or sound sculptures.

The handpan is two metal domes adjoined together and tuned to a particular musical note. The center note on the top surface is referred to as the “ding.” There are 7 or 8 other spots zig-zagged around the ding.

The spots can play harmonized notes when tapped. The ding is usually dented in (inpex) or out (apex) depending on the manufacturing company. The bottom shell has a hole inside that helps add depth to the different tones. PANArt calls it the “Gu” hole.

The handpan is played by hand and the sounds it produces are soft and layered with undertones. With every note you play, the octave and the fifth note will resonate along with it. It enriches the sound and makes it sound like raindrops.

How To Play The Handpan

Handpans are like harmonicas, no matter what or how you play, it always sounds relatively good. Harmonicas have multiple notes tuned to one scale, so any note you play can be the “right” note.

Similarly, the handpan is tuned to a single note, so any spot you tap, the sound is synchronized and in-tune.

You don’t need to be a musical genius to learn to play quickly. You don’t even have to be a musician to tap a decent tune out of it. It’s a relatively simple instrument and can be very easily incorporated in any genre of music, or enjoyed on its own.

Now that we know where the instrument was invented, how you play it, and how it sounds, let’s try to understand why the price of a handpan is quite high.

Handpan prices vary depending on the quality of the make and the manufacturing company. The instrument is handcrafted, and it takes weeks to make one. If you examine carefully, you’ll notice hammer marks from the creator.

Since the device is assembled and tuned (with a hammer) by hand, it’s a time-intensive process, and hence increases the price of the instrument.

On the low end, a handpan price can range from somewhere between $622 and $1500. But, you’ll find drums available from high-end manufacturers around $3500, with some from top manufacturers even reaching a staggering $10,000 price tag.

Even though the price of a handpan may seem like a hefty investment, the instrument is worth every dime. Often, new music enthusiasts buy an instrument and end up not playing it. But because the handpan is so easy to learn, and sounds amazing, it’s more likely to be your gateway into the world of music.

What Is the History Behind Handpans?

Is it called The Hang or the handpan? There seems to be some confusion in the colloquial naming. The Hang is just a type of handpan that was manufactured by PANArt up until 2013. The origin, however, can be linked to as early as the 1940s.

Evidence of using steel pan and drums as musical instruments was seen in Trinidad and Tobago at first. The modern handpan instrument was introduced by PANArt later in 2000.

This instrument was called “The Hang” because it was manufactured in Switzerland first, and “Hang” basically translates to “Hand.” After “The Hang,” the name handpan became more common as more manufacturers started manufacturing the instrument.

Top 4 Reasons Why You Should Learn to Play the Handpan

Having learned about its construction, sound, and history, let’s look into four reasons why you should get your hands on one for yourself!

1. Listen to and play therapeutic music

The sound of a handpan cannot be compared to any other instrument you have ever heard before. It produces some really unique sounds that many avid enthusiasts have labeled as tranquil. Others have described the music to be mysterious, joyful, or even haunting.

2. Get started with playing tunes quite easily

The handpan doesn’t have a steep learning curve to it and is relatively easy to learn. Anyone can buy a handpan and start tapping and stroking it using their fingers and produce beautiful sounds.

There are books, YouTube tutorials, free online courses, and a helpful community on Reddit. With some dedicated practice, you can start playing notes in just a few days and play rhythms in only a few weeks. It’s that easy.

3. Impress others with the beautiful sound you produce

Because of the sound that a handpan produces, anyone that you play for will be instantly impressed. Whether you are playing for family and friends or surprising your significant other for a special occasion, your playing will always leave them impressed!

Moreover, it is a great way to fulfill your desire for learning to play a musical instrument. Not all of us have the time to learn a new instrument like the piano for instance.

4. Be a part of a niche community

As the handpan is a relatively new instrument, you’ll be one of the early adopters if you do start playing. There is already a growing virtual community of both beginner-level and professional handpan players.

You can be a part of this great community of enthusiasts and get the feeling of being a part of an exclusive group. They will assist you in starting to play the instrument or give you tips on how to tune a handpan properly.

But also as previously mentioned, in-person gatherings and festivals have begun to sprout up. And there’s no better feeling than playing music as a part of a larger group!

Moreover, if you’re new to the world of music, I would always recommend you start with an easy instrument to fuel your fascination.

Are you intrigued yet? Here’s some handpans I’d recommend!

Final Thoughts On The Handpan

Two dome-shaped metal sheets are glued together. These metal domes form a resonant sound chamber that produces some beautiful melodies.

But don’t be fooled by the simplicity of this instrument, the sounds it produces are truly incredible, and will be sure to impress anyone that catches a glimpse.

Interested in another steel drum from the same family? Check out my article on the best steel tongue drums!

Harmonium: Everything You Need To Know