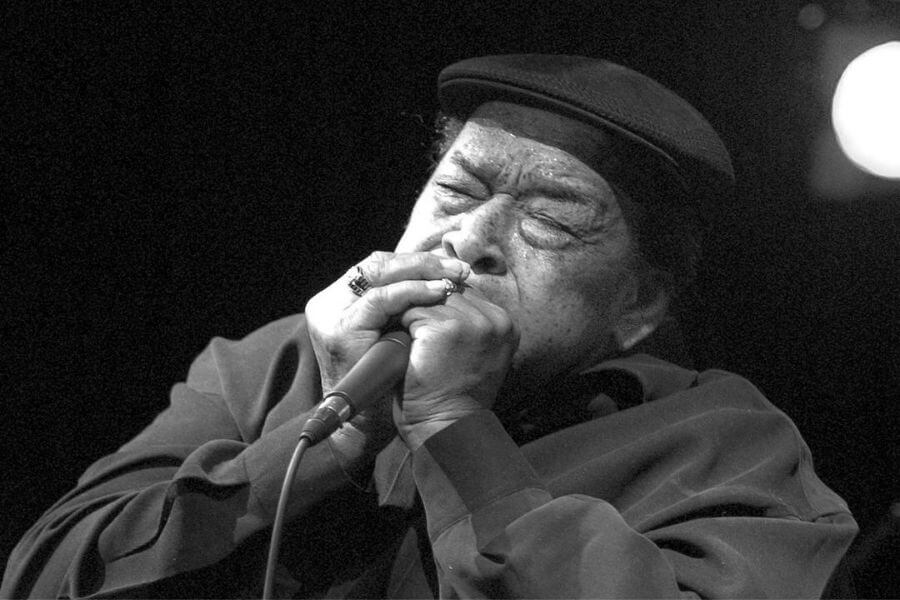 The legend of the harmonica precedes the reputation that it has nowadays. The instrument used to portray the heart and soul of blues, classic rock, American folk, jazz, and country music.

It is now an accessory that hums along with a more focal instrument. We rarely see featured harmonica players soloing their souls out on stage, but they are not all gone yet!

Harmonicas have been contributing in creating melodies since the early 1800s. Musicians have been using harps to voice a song or outline a tune over a rhythm ever since.

Over the past couple of decades, different artists have experimented and mastered the art of playing the French harp. They have defined the instrument and expanded the possibilities of incorporating harmonicas in almost all genres of music.

Some of the best harmonica players have left or continue to make waves in the industry, with their unique style, mesmerizing compositions, and a flare that for some has put them in the hall of fame.

Here are ten of my favorite harmonica players you should know!

James Cotton laid the foundation for many harmonica players from the 1950s up until now. The man is a blues legend and a pioneer of harmonica-based music. He initially became famous when he joined with Alligator Records to release his album series.

James brought the harmonica under the limelight with his exceptional blues tunes and had popularized the instrument, further, during his collaboration with Muddy Water and the Howlin’ Wolf.

Modern players, both professional and amateurs, use his style and technique for inspiration.

Greg Slapczynski is a Polish harmonicist who moved to France with his family during the 1980s. At that time, he had a small harmonica in his possession, and later, went on to create a name for himself playing it.

Greg is widely known for his blues renditions, but he can adapt to almost any genre, making him one of the most widely-known musicians in Europe and France.

Aleck Miller was an American harp genius back in the 1950s. His first collaboration was with Elmore James in “Dust My Broom,” but he has created multiple records during the 1950s and the 1960s.

You may know him from his chartbusters “Sugar Mama Blues,” “Keep It To Yourself,” and “Bring It On Home.”

His massive fan base was devastated when the artist passed away from a heart attack while he was asleep, the night before he was supposed to perform on the King Biscuit Time Show.

Salwitz first picked up a harmonica at the age of 9, and he has made magic with it ever since. He began his journey in music by learning the trumpet first and gaining his popularity playing harmonica for the J. Geils Band during the 1970s.

His hit compositions include “Whammer Jammer” and “Centerfold,” released during the 1980s. After the band dissolved, Salwitz went on to design his harmonica, which he named “The Magic Harmonica.”

His illustrious career has made him not only internationally famous but also one of the most successful contemporary harmonica players. The multi-talented artist can also play the saxophone exceptionally well and currently tours around to perform sold-out concerts.

Toots is an American harmonicist with a Belgian background, famous for playing the chromatic harp. He gained international recognition with his 1961 hit record, “Bluesette,” which later defined his style and became his signature song.

Toots gathered his inspiration from Django Reinhardt, and later in his career, he performed with the Benny Goodman band. He has played an enormous role in the preservation and upkeep of the harmonica in music.

Mickey Raphael rose to fame playing for the king of country music, Willie Nelson, for almost 30 years. His renditions have made him an exceptional American harmonicist, with a unique playing style and personifying techniques.

For years, his incorporations have been the foundation of Willie’s music.

But his list of collaborations stretches beyond Willie, some of his most well-known collaborations include Johny Cash, Snoop Dog, Lionel Richie, Elton John, Neil Young, Leon Bridges, and many others.

He has acquired a considerable fan base through his contributions and collaborations with exceptional artists, both with records and onstage performances.

Like many harmonica players, Jason Ricci is a man of the blues. He dug deep into the world of blues music with his powerful playing style and evolved the genre with his modern interpretations.

His involvements in collaborations include Anna Popovic, The Mannish Boys, Johny Winter, Walter Trout, and many other famous artists.

The 44-year-old musician has created solo albums as well, alongside his collaborations. He is currently one of the very few musicians left, contributing significantly to keeping the harmonica alive.

Little Walter is one of the best harmonica players of all time. He has mesmerized audiences with his jazz and blues renditions on the harmonica, and very few musicians can replicate what he has done throughout his career.

He died when he was just 37, which came as a shock for everyone, but the work he left behind keeps his memory alive.

Jerry Adler is a musician from Baltimore and has worked in the music industry for over 65 years. He is a role model to many harmonicists in the world and has created thousands of compositions during his active career.

Besides his collaborations with countless artists, his work has also been used in many soundtracks for films.

In 2005, the artist released an autobiographical book called Living From Hand to Mouth, which brought him acclaim. Five years later, he was diagnosed with prostate cancer and lost the battle in 2010. He was 91 years of age at the time.

Howard Levy is a one-of-a-kind harmonica player, specializing in fusion music. Most of his work is a blend of folk, classic rock, jazz, country, and blues.

He received a Grammy Award in 1997 for Best Pop Instrumental Performance and Best Instrumental Composition in 2012 for “The Sinister Minister” and “Life in Eleven.”

He has collaborated with Rabih Abou Khalil, Paquito D’Rivera, Paul Simon, and many other artists, to create influential fusion music. Howard founded the band, Trio Globo, and the recording company, Balkan Samba Records.

I hope you’ve enjoyed my list of the best harmonica players of all time!

Want to learn how to play harmonica, check out our article on the best online harmonica lessons!

5 Best Flamenco Guitarists Of All Time