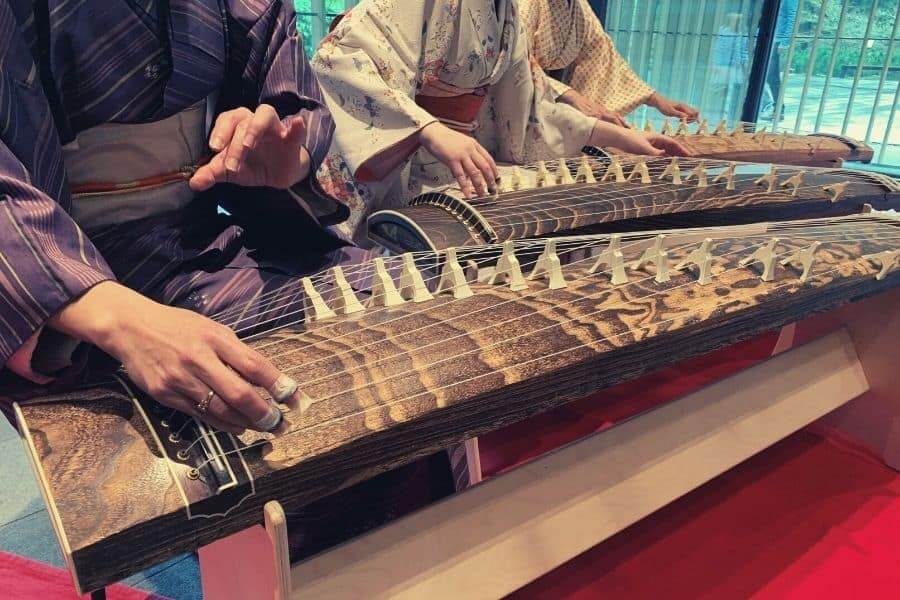 Those who have heard the beautiful melodies of customary Japanese music will have inevitably heard the unique sounds of a Japanse string instrument.

There is a reason why their music is enchanting, inspiring, and like nothing else in this world, the traditional Japanese string instruments used.

Many of these traditional Japanese instruments which were used many centuries ago are still being used today, some even enjoying a resurgence!

Here is a list of my favorite Japanese string instruments that truly sound remarkable.

7 Japanese String Instruments You Should Know

The Koto is a very famous and appreciated musical instrument in Japan, and it is a descendant of the Guzheng, (a Chinese stringed instrument). It is similar to the Vietnamese dan tranh, Korean gayageum, and Mongolian yatga.

Its body is 71 inches long and 7.9 inches wide. They use paulownia wood to make it, and it has 13 bridges and 13 strings. They used ivory to make it in the past, but today plastic and different types of wood are used.

For the strings, they are typically made from silk or plastic. All of the strings are similar when it comes to tension and size, however, they produce different sounds.

Yatsuhashi Kengyo is one of the most well-known players of the instrument and a large reason why this instrument is so developed and popular today. Even referred to as the “Father of Modern Koto.” He even created Kumiata, an innovative form of Koto music.

Sōju Nosaka II has also played a large part in developing the Koto, she introduced versions of the instrument with seven more strings, creating a more modernized approach.

Shamisen, sangen, or samisen, are all common names for this Japanese plucked instrument. Interestingly, the instrument has no frets, but a very long neck.

It was first used on the Okinawa islands and later spread to Japan. Initially, the instrument was called the Sanshin, which later led to the design of the shamisen.

This Japanese string instrument has only three silk strings and tuning pegs on a body made of wood. Compared to the guitar and banjo, the neck is thinner and fretless. To create the famous Japanese tune, a bachi needs to be used (a plectrum).

The shamisen can be played in ensembles, but it sounds fantastic when it is used solo as well. It often accompanies Kabuki (a Japanese dance-drama), and it enriches this kind of performance. It is also great for folk songs and puppet plays.

Different genres require different shapes and tuning, however. They often use Honchoshi/base tuning, but San Sagari/lowered and Ni Agari/raised are also popular.

The Biwa is also a plucked instrument that needs a bachi (big plectrum) to play it. It looks like a pear because of its body and short neck. People usually use it when they tell narratives.

It has 4 or 5 strings made of silk, and each of them is different when it comes to thickness. It is excellent for both solo performances and ensembles. You can consider it a type of lute.

The instrument originates from the pipa, which comes from China. It was first used in the 7th century.

Today there are many varieties, and the device comes in different shapes and sizes, all of them producing slightly different sounds. These include the Nishiki-biwa, Gogen-biwa, and Heike-biwa. Each is made for a specific purpose.

Biwa is used for gagaku – elegant music, or court music and dances. In the Tokyo Imperial Palace, some ceremonies involve this highly graceful instrument.

The Gottan is sometimes known as the ita or hako. It is ancient, and for centuries street musicians have used it for money and food, going from door to door. The design and music produced are both quite simple, especially as it only has three tuning pegs and strings.

The sound coming from them is cheerful, light, warm, and gentle. They mostly use Japanese cedar to make it because the wood needs to be reliable, although recycled metal cans can also be used.

Those who know how to play this joyful and festive instrument often perform folk songs that fill people with pure happiness.

Because it’s not too expensive, many can afford it and enjoy its pleasures. And since it has only three strings, it’s not difficult to learn how to play either.

This Japanese string instrument came from the original northern Japanese inhabitants called the Ainu tribe, who were the first to use it.

The tonkori has two bridges, five strings, and no frets. They use dark-bark spruce to make it, and it’s 47 inches long. For strings, they use vegetable fiber, gut, and deer tendon.

When one plays it, they need to place it across their chest. Both hands are used for plucking from both sides. It can be played solo, but it is also perfect for songs and dances. Interestingly, the name is an onomatopoeic description of the instrument’s sound.

Apparently, it’s inspired by the shape of a woman’s body. During the 1970s, the instrument became extinct, but over time its begun to appear more frequently. One key figure in the instrument’s revival is Oki Kano, a famous musician who plays the tonkori and comes from Hokkaido.

Similar to the Shamisen, the Sanshin is from the Okinawa islands. The Sanshin has three strings on a snakeskin-covered body, and it has a beautiful long neck. A person who plays this instrument is known as a sanxian.

The strings of this Japanese string instrument are usually made of silk or nylon. They also use the black ebony core for the neck because it is strong and durable, and it gives the Sanshin that beautiful sound, which is recognizable. Although other woods such as Rosewood, Apitong, and Oak are also used.

The Sanshin has three tuning pegs, typically made of ebony. Today people often use artificial Sanshin skin to make this instrument instead of snakeskin. Often the material of choice is polyester, as it isn’t sensitive and prone to skin cracks.

They say this instrument is the soul of Okinawan folk music. Both children and elders can play it, and most families in this city have one at home. It is perfect for family gatherings, especially celebrations like birthdays and weddings.

The kokyu is different from the other Japanese string instruments because it is the only one that requires a bow. It is 28 inches and very graceful, looking like the shamisen. However, it is smaller. In Okinawa, they have a version of this instrument called kucho, which is round.

The tool has a quadrilateral body. The neck is made out of ebony, but styrax japonica wood and coconut are often used. Some people use cat skin; others use snakeskin to cover the ends of the instrument.

There are usually three strings, but sometimes you may see four of them. It is often compared to other bowed string instruments like the zhuihu and leiqin.

If you like jazz and blues, you might like the kokyu. Even though this instrument is traditional, it is occasionally used for modern music and even outside of Japan.

Japan is a country that respects and nourishes its culture and traditions, so, understandably, these instruments are still appreciated and enjoyed today. With some also facing a resurgence!