Fiddle vs Violin: What’s The Difference? 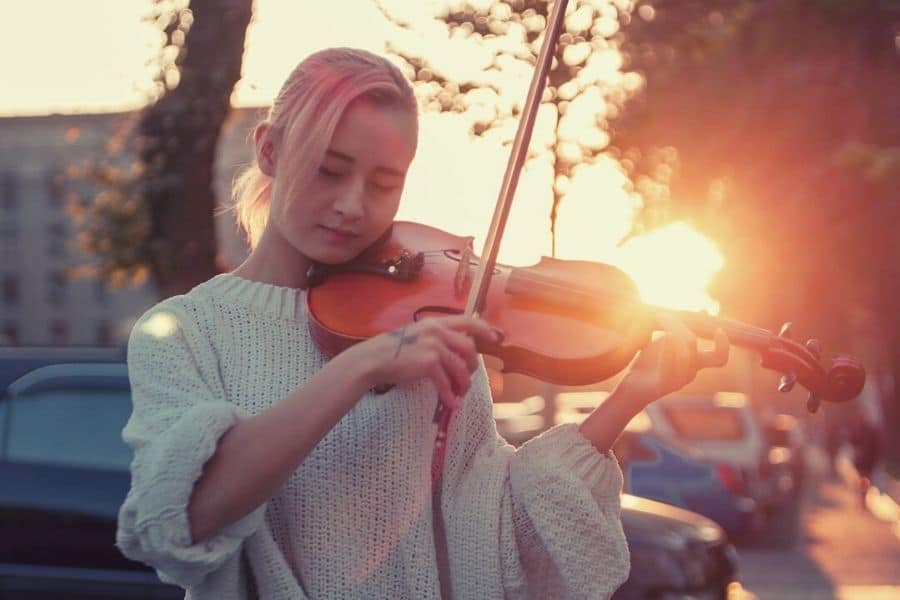 One of the most frequently asked questions of those deciding between the fiddle vs violin to learn, or just plain curious is, “what’s the difference between a violin and a fiddle?”

Looking for a quick answer, here it is:

The words violin and fiddle are two names for the same stringed instrument. Fiddle is an informal way of referring to the violin. In the world of classical music, the instrument is commonly called a violin, whereas, in folk or bluegrass music, it’s more often called a fiddle.

For a deeper explanation, continue reading!

More often than not, they get given the same answer, which is “nothing.”

While it’s true, it isn’t as simple as that. Yes, a fiddle is a colloquial term used to describe a cello, viola, violin, or whatever bowed string instrument.

For violins, in particular, it is what many violinists affectionately call them.

They are generally considered the same. However, in the United States, you can say that the main difference lies in who’s playing the violin.

It would depend on their playing style and the kind of music they’re performing.

Let’s break down the fiddle vs violin confusion!

The main distinction between the violin vs fiddle is in the genre of music played. Violins are primarily used in classical music and jazz.

The differences in the musical genres have a profound influence on the techniques used.

The playing styles of the performer will also matter in the distinction.

As mentioned earlier, both violins and fiddles are fundamentally the same, especially regarding their physical structure and dimensions. That’s why you can also play fiddle music with a violin.

However, with a violin, the setup has evolved to make it easy to play that type of music. The bridge is a small and movable piece of wood that supports and separates the violin’s four strings.

It’s curved so that when a violinist draws the bow at a certain angle, it will only play a single note from the string that he or she wants to play.

However, fiddlers use a flatter bridge because it lets them play up to three strings at once in a chord if necessary.

It also allows faster crossing from string to string for an even more upbeat tempo. The output is something that people can dance to.

Violinists prefer the sound of traditional gut strings, which are known to have rich and warm tones.

Most modern-day violins use synthetic core strings that sound closest to gut strings but are more durable and less finicky to use. They typically consist of high-tech composite materials such as advanced nylons.

The most common strings used in fiddles are steel-core strings. They give out a sharper and more precise sound with fewer overtones preferred by most non-classical players.

The most significant development with fiddles in recent years is the adoption of a 5th string that has yet to be introduced in violins.

When violinists try to interpret a classical music piece, they are careful to reproduce what the composer had originally intended. It could be down to exacting details such as the volume of an individual note.

They’re required to adhere to the composition as strictly as possible. Any deviation from it is frowned upon and sometimes regarded as a mistake.

On the other hand, fiddlers are allowed more creative freedom to interpret folk music, for example, sometimes going as far as making the melody almost unrecognizable.

It doesn’t make it inferior or less challenging to play, but just different and leaning more towards improvisation.

Another noticeable difference is in the way they hold the instrument. Violinists have what is considered the proper way of doing it.

Fiddlers are known to have a more casual way, with some even using odd methods such as placing it at chest or even arm level.

It’s apparent among fiddlers with informal training or who learned to play by ear.

You can see it with square dance fiddlers, for instance, which lets them talk simultaneously. This technique is considered taboo in classical playing. However, more and more learned fiddlers use this technique.

Despite their different genres, fiddler music can be as demanding on the talent and skill of a player as much as classical music. Many classically trained violinists also love to fiddle every once in a while.

Besides continuously honing their craft, fiddling offers a fresh perspective, adds variety, and presents a new set of challenges, something which all violinists should experience at some point.

I hope this article helped you understand the main differences between the violin vs fiddle.

Want to learn how to play the violin or fiddle? Check out our articles on the best online violin lessons and online fiddle lessons!

The Güiro: Everything You Need To Know