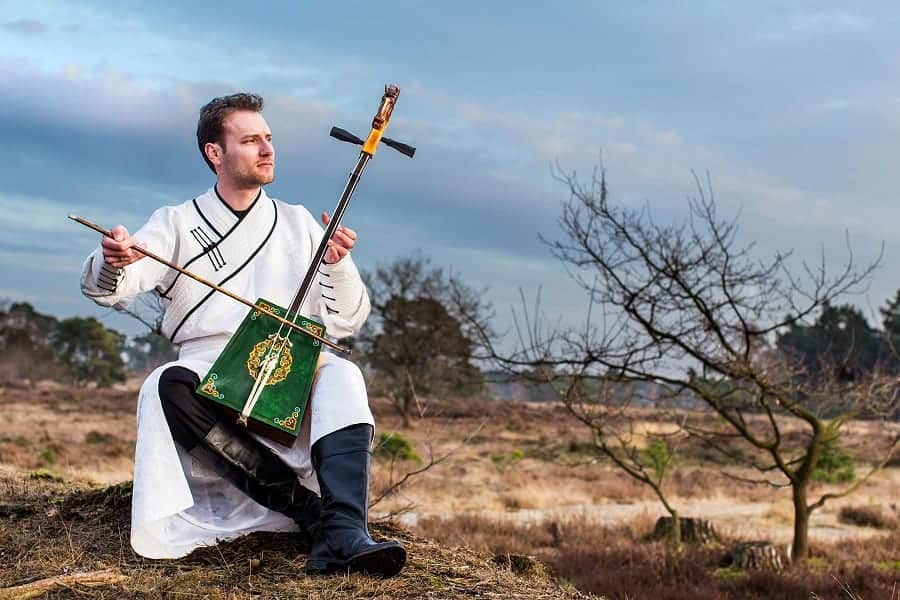 There are probably more string instruments than any other type of instrument in the world.

It is estimated that there are approximately 300 instruments that belong to the string family. These range from single-stringed diddley bows to 88-stringed pianos and so on.

Well according to the Encyclopedia Britannica it’s considered “any musical instrument that produces sound by the vibration of stretched string which can either be made of metal, silk, animal guts, vegetable fiber and artificial materials such as plastic or nylon.”

In the following article, we’ll take a look at some of the most popular as well as the lesser-known string instruments from around the world.

10 string instruments from around the world

The erhu, also known as the “spike fiddle,” is the most common of the Huqin family of bowed string instruments that are popular in Chinese music. This alto or middle-range instrument has a history that dates back 4,000 years!

Many different types of hardwoods are used in constructing the erhu, but many consist of rose and red sandalwood.

It has an octagonal or round sound box at the bottom with a long neck and two tuning pegs, one for each of the two strings. Unlike the violin, it has no fingerboard so the player’s fingers must press the strings at the desired point.

Because the erhu has no frets, the tone is lightly muddied, yet still resonant.

The sandbox is usually covered with python or snakeskin on one side and ornamental wood on the other. The erhu’s bowl is made up of bamboo and horsetail hair. It’s mounted between the two strings and can’t be taken out.

This nyckelharpa, also known as the chordophone, is a traditional Swedish musical instrument dating back to the 16th century.

Structurally, it’s most similar to the hurdy gurdy. The modern chromatic nyckelharpa has 16 strings, 3 melody strings, one drone strings, and 12 resonance strings.

There are 37 wooden keys that are arranged to slide under the strings attached to tangents and when depressed serve as frets to change the pitch of the string.

You operate this instrument by using a short bow in the right hand while the left-hand pushes on the keys. It also has an octave range, sounding similar to a fiddle, but only with more dissonance.

Incredibly, there are around 10,000 nyckelharpa players in Sweden today!

This morin khuur is commonly known as the horsehead fiddle and is one of the most significant musical instruments of the Mongol people.

The traditional bowed string instrument is considered a symbol of the Mongolian nation and one of the Masterpieces of the Oral and Intangible Heritage of Humanity identified by UNESCO.

Many festivals are held in honor of the morin khuur and locals have this box-shaped wooden instrument in their homes because it is seen as a symbol of peace and happiness.

The strings are made from horses’ tails and strung over a wooden bridge on the body and up a long neck. This then proceeds past a second smaller bridge to two tuning pegs on the scroll which is carved in the shape of a horse’s head.

The playing technique is quite natural since the distance between two fingers typically makes up the difference of a halftone.

The Bulgarian gadulka is a significant part of the Bulgarian traditional instrument collection.

It is usually played in the context of dance music, the name meaning “to make noise, buzz or hum.” It has 3 melody strings and 16 sympathetic strings (made from steel) that all give resonance to the tones which are made by gliding the strings with the bow.

The bow is made of flexible forked willow twig. These strings are tied with horsehair and waxed with the rosin.

Unlike other stringed instruments, there’s no nut on the top of the strings and they stretch between a tuning peg at the top and a tailpiece at the bottom, which passes over the bridge or through holes in the bridge.

The bowed psaltery, invented in the 20th century, is a type of psaltery or zither with a wooden soundbox and strings that run over the soundboard.

It’s much different from a medieval plucked psaltery as the strings are arranged in a way that allows it to be played with a bow.

It is triangular in shape and each string is further separated than the one before it, this is to ensure that each string can be individually paid. Chromatic bowed psalteries feature flats and sharps on one side and the diatonic notes on the opposite side. The soundboard also has a rose or soundhole in the center.

In the United States, it is normally played with a small bow, often made in the new curved style. In Europe, they tend to use a smaller sized modern violin bow instead.

The masenqo is a single-stringed bowed lute that has its roots in traditional music of Ethiopia.

It’s used by Ethiopian minstrels called azmaris and demands great virtuosity as they sing while playing. The diamond-shaped box is made of four small wooden boards that are grouped together and covered with a stretched parchment or rawhide.

The single string is usually made of horsehair, running over the bridge. The masenqo is tuned with a large tuning peg to fit the range of the singer’s voice. It may be bowed by the right or left-hand while the other hand sits at the top of the upper part of the string.

The violin is considered the baby of the string family. It’s the smallest in size and also the highest pitched.

An interesting fact is that there are more violins in the orchestra than any other type of instrument. Violins are responsible for playing the melody while they also alternate between the melody and harmony.

Want to learn how to play the violin? Check out my article on the 10 Best Violins For Beginners!

A violin that is averagely sized is approximately 24 inches and has a slightly longer bow. The violin is played by resting it between your chin and shoulder. The left-hand holds the neck of the violin and presses down on the strings to change the pitch while the right-hand moves the bow across the strings.

The harp is slightly different from other stringed instruments, mainly due to its size. They are usually around 6 feet tall and shaped a little like the number seven.

Typically, harps have 47 strings of different lengths which are all tuned to the notes of the white keys of the piano. You usually find one or two harps in an orchestra and they play both the melody and harmony.

The harp is played while sitting down with your legs on either side. The neck of the harp lies on your right shoulder. Each of the strings sounds a different note and you play them by plucking the strings with your thumb and fingertips.

At the bottom of the harp, there are seven-foot pedals that change the pitch of each string.

Interestingly, the harp is the oldest known instrument, with evidence suggesting it was used in Ancient Egypt around 2500 BC!

The mandola is traditionally shaped and complements the sound of any acoustic ensemble.

The dulcimer is a musical instrument that was developed in the early 19th century in the mountains of Appalachia.

It’s a stringed instrument that sounds a lot like a guitar. It’s actually a part of the zither family of instruments and some historians believe that it might have its roots all the way back to 1500 B.C.E.

The name itself means “sweet sound” and it is an accurate description of the notes that exude from the dulcimer.

Ukulele vs Guitar: The Ultimate Showdown