Ukulele vs Guitar: The Ultimate Showdown 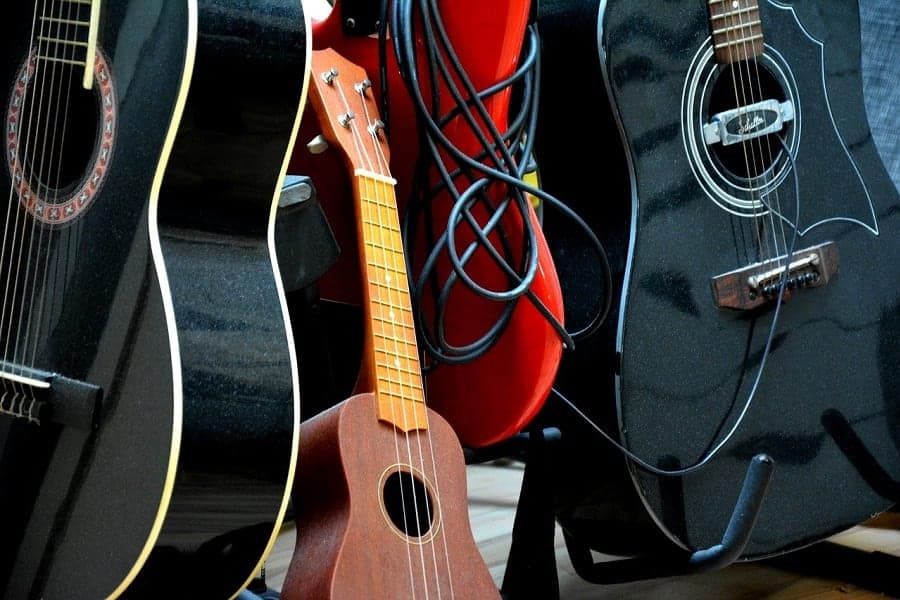 Both the ukulele and guitar are two incredible instruments that have a lot of similarities, but quite a few differences as well.

Both of these instruments are mobile and extremely fun to play but everything from size and construction down to tuning and how to play chords is quite different.

However, knowing how to play one instrument will definitely help you to play the other.

In the following article, we’ll take a look at the similarities and differences between ukuleles and guitars and how to decide which is the right one for you.

The guitar and ukulele are two very popular instruments, however, guitars have been more integral within popular culture and music than the ukulele.

The guitar is often considered to be a more serious instrument than the ukulele. Although this is beginning to change, with lots of extremely challenging and unique music being created for the ukulele in more recent times.

The name ukulele has traditional Hawaiian origins. It was given to a small instrument called the machete which was originally created in the Medina Islands of Portugal.

Ultimately, the ukulele is a modified version of other Portuguese string instruments. Not long after being brought to the island, the ukulele soon became one of the most popular instruments around. This led to the manufacturing of inexpensive models which gave many people access to them.

It grew in popularity due to its affordability and its small size. Thousands of these instruments were manufactured throughout the 1920s and it became one of the musical icons of the time.

However, during the 1930s, the ukulele slowly declined in popularity. It was later revived in the late 1940s to 1950s when American servicemen brought the instrument home with them from Hawaii after World War II.

Today, the ukulele is a very popular instrument around the world. Although once associated with traditional Hawaiin music, it’s now integral to various different cultures and has become very popular in many musical settings.

The guitar is a noble and ancient instrument that is believed to have originated over 4000 years ago. While there are many theories about how the instrument came about, it is often claimed that the guitar was created from the lute or even the ancient Greek kithara.

The instrument had a deep box-shaped body. Two hollow arms were connected by a crossbar that extended from the resonator. Originally, the instrument had three strings, however, later versions had as many as 12.

There is a theory that a man named Lamech, Noah’s grandfather, and the sixth grandson of Adam and Eve, designed the guitar. Lamech was apparently inspired to design the shape of the instrument known as the oud after hanging the body of his dead son from a tree.

Ukuleles are constructed primarily from wood, although there are some cheap plastic ones out there (I wouldn’t recommend).

Different wood from all over the world are used, these include maple, rosewood, walnut, myrtle, cocobolo as well as black limba and lacewood. Most of the best ukulele brands from Hawaii use the legendary koa wood, known for it’s warm and clear sound.

Guitars also are made mainly from wood. Some of the typical types of wood used for the body and the neck of the guitar are ash, maple, mahogany, basswood, alder, poplar, Agathis, spruce, and holly.

Ukuleles have approximately four strings while guitars have at least six strings. This makes learning the chords on the ukulele much faster than the guitar.

For kids with small hands and fingers, it makes using a ukulele much easier. However, for some adults, the ukulele can be particularly difficult due to their larger fingers.

Guitars don’t just come with any old type of string. In fact, the strings are made of metal, typically steel, or nylon.

This gives them more tension which accounts for the amount of force the strings undergo as they stretch horizontally. The string tension ultimately comes from the string mass, the length of the scales as well as its tuning.

On a guitar, you can expect a string tension of 24 to 35 pounds for each of the strings. Ultimately, tension can be low, medium, or high. The higher the tension the harder it is to move the strings.

At a high tension, the strings won’t bend as much when you strum them with your fingers or pick. The opposite is true when there’s low tension. In this case, the guitar strings become more malleable.

With a guitar, you don’t really have to worry about low tension strings. The steel-bodied strings mean that you get more tension when you play, making them harder to move.

When compared to guitar strings, ukulele strings aren’t made of metal but a type of synthetic material such as plastic or nylon.

The strings are therefore more malleable and give less tension than a guitar. Each string has a tension of 7 to 13 pounds.

With the ukulele, this is the perfect amount of tension that is needed. The strings are gentler on your fingertips which is one of the reasons why these instruments are so popular amongst lots of people.

The lower tension also means that it has a brighter tone than a guitar and it’s not nearly as loud.

The biggest similarity between the ukulele and guitar is that they both are stringed instruments. Ultimately, this means that they sound somewhat similar.

Guitar strumming sounds are broader and more filled out than the ukulele because of its larger size and the added strings. But any simple strumming on a guitar can easily be mimicked on a ukulele in much the same way.

Steel-string acoustic guitars are basically created with the purpose of producing loud and bright sounds. Guitars that are associated with blues, folk and other traditional genres of music.

The ukulele, on the other hand, is unique. It is a creation of Portuguese immigrants in Hawaii and was always associated with traditional Hawaiian music.

Lately, thanks to recent pop hits like Jason Mraz’s “I’m Your’s” the ukulele has become quite popular in the music world.

Irrespective of whether you want a cheerful, acoustic tone or a window-shattering rock concert, a guitar can provide that versatility, whereas a ukulele can’t. This is because you have a broader diversity of chords, riffs, and intervals with which you can play compared to the ukulele.

The sonic capabilities of the guitar, when combined with an effects pedal, are amazing, and unbeatable. The instrument is capable of creating sounds that don’t even resemble a stringed instrument.

If you are looking for an instrument with lots of different sound options and the freedom to experiment, an electric guitar would be good for you.

As far as range and tone go, the guitar offers you more variety than the ukulele.

For instance, the bass ukulele will give you that deep tone similar to a standard bass guitar whereas a soprano ukulele a bright, jangly sound!

Although the range is smaller, you can still play a variety of different styled songs on it.

The ukulele as everyone knows is much smaller than the guitar. The scale lengths on a guitar range from 24 to 25.5 inches whereas the standard ukulele are approximately 13 inches.

Ultimately, what this means in practical terms is that the frets are much closer together compared to the guitar so playing basic chords on the ukulele requires you to stretch less.

Plus, the ukulele is smaller, lighter, and therefore more portable, making it a great travel companion!

Perhaps one of the advantages of the ukuleles being smaller than the guitar is that they are also much lighter.

Ultimately, this means that ukuleles are much easier to carry around and travel with, something which I personally cherish.

In regards to price, generally, a ukulele is going to be cheaper, simply due to it being smaller in size. Like all instruments, the price range varies, depending on many factors.

When shopping for a ukulele, I highly recommend you check out my article about the best ukulele brands.

This is to ensure you are buying a quality built instrument from a reputable brand. Most of the ukulele brands listed have budget-friendly options and range from beginner to professional levels.

By sticking with these top ukulele brands, you are ensuring that you are paying for better build quality and longevity than the others you may find floating around on the internet.

The ukulele is probably the most user-friendly instrument for everyone, even children.

When playing instruments such as the guitar, most beginner students struggle with painful calluses on their fingers for a month before they are able to play. With the ukulele, you never have to experience that.

Not only that, but they are also much easier to learn, which is good if you are a slightly less patient person, or you simply don’t have as much time on your hands!

Is ukulele better than guitar?

The ukulele can be seen as better than the guitar for a few reasons. Mainly, because it’s easier to learn, it’s more affordable, it’s portable, they sound good, and popular songs can be easily adapted to be played on the ukulele.

What’s the difference between guitar and ukulele?

Can I play the ukulele if I play guitar?

Definitely! In essence, it is the same. You just have fewer strings to strum or pluck and frets to place your fingers on the ukulele. The chord shapes are exactly the same, just on a smaller scale.

Ukulele vs guitar for child?

Ukuleles are much better for children than guitars. Because they are smaller and have only four strings, it means it is ideal for children with smaller hands. There is also less string tension making them much easier to hold down and more comfortable on the fingertips.

What is the best ukulele for a child?

The Kala Learn to Play Ukulele Concert Starter Kit is perfect for a child or anyone looking to learn the ukulele. It includes everything you need and even online lessons that provide a great structured way to learn from home.

Ukulele vs Guitar – Which One’s For You?

The ukulele vs guitar debate really depends on you and what you want to achieve musically.

If you want an instrument with a fast learning curve for beginners, smaller and more portable in size, and tend to enjoy the higher and more cheerful tones the ukulele produces, then it’s probably the better instrument for you.

However, if you want an instrument that offers the ability to play a wide variety of music styles, a much larger range of tones, and the ability to experiment with thousands of different sounds, then the guitar is probably for you.

But there is no right or wrong answer here…

Ultimately, the skills that you learn when playing the guitar or the ukulele are interchangeable and will benefit you irrespective of whether you choose to play the ukulele or the guitar first.

I hope this has helped you on your musical journey, any questions don’t hesitate to get in touch! – Will

Struggling to decide which is the best ukulele brand for you? Check out my handy guide below!

The Best Ukulele Brands to Look out for in 2020

What is a Guzheng? Everything You Need to Know