How to Play the G Chord on Guitar (Tips & Easy Way) 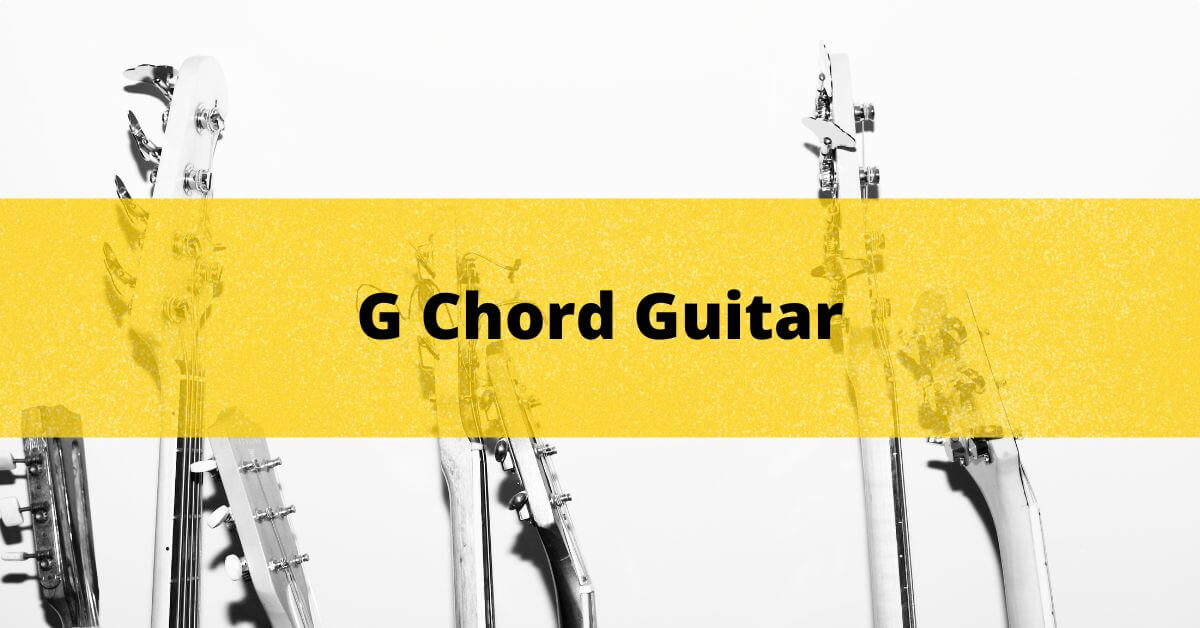 The G chord is one of the most widely used chords. Therefore, learning how to play the G chord on the guitar is a must.

If you learn the G guitar chord, you’ll be able to play countless popular songs.

And if you’re a beginner, you’ll be happy to hear that playing the G chord entails open chord shapes. That makes it easier to learn than some barre chords like F Major and B Major.

However, it’s also not the easiest chord to learn on guitar. But with enough practice, you’ll master it sooner than you think.

Now, let us show you how to master the G Major chord in a quick and easy way!

How to Play the G Chord on Guitar

The Major G chord contains the notes G, B, and D; the first, third, and fifth notes of the key of G.

The G chord is one of the first chords where beginners learning to play guitar need to stretch their fingers a bit. But it’s also one of the chords that can be played with straightforward open shapes.

There are several ways of playing the G chord on the guitar.

So, let’s start with an easy G chord. You’ll have to do this:

Then you need to strum all six strings down from the low E string.

It’s not easy to stretch your fingers across strings, so don’t panic if you don’t get it the first time. Although the G chord doesn’t have a reputation for being the toughest guitar chord, it’s also not simple.

Nonetheless, learning the guitar G chord is essential. And it takes time for muscle memory to kick in.

Over time, you’ll also improve your finger strength and dexterity. You just need to practice regularly.

However, if you want to try simpler versions of the G chord first, you can check out the following options.

If you want to make things easier, try this two-finger G chord version:

This requires strumming down from the G string. Easy, right?

But there’s an even simpler one-finger version:

Now strum three strings down from the G string.

Of course, this version doesn’t sound as full as the previous versions, but if you’re learning how to play simple guitar songs, it will be good enough.

Besides the open position, the most common way of playing the G chord is the barre chord version. It goes like this:

As you can see, this is not a piece of cake. But you also shouldn’t be scared of barre chords. Although they might seem intimidating (rightfully so), they are an essential part of many songs. And if you want to become a skilled guitar player, there’s no way of avoiding it.

Therefore, it’s better to tackle barre chords from the start. Of course, you should take it slowly and master the easier guitar chords and versions first. But don’t stick to easy versions simply because the alternative requires more effort.

At the end of the day, the more you practice the easier it will get. Over time, you’ll be able to play barre chords smoothly. And the G chord shape is one of the core guitar chords.

After you’ve learned the G chord and its variations, you have to keep practicing.  And one of the best ways to practice the G chord on guitar is by combining it with other chords.

The G chord can usually be found next to the C Major chord and D Major chord. Therefore, practice transitioning from the G chord and other chords and back again.

For example, you can try strumming a G chord for four beats and then move to the C or D for another four beats.

You can gradually increase speed. And don’t rush – play faster only if you’re comfortable with moving between the chords.

It’s important to take it slowly. Otherwise, you might feel frustrated or worse: hurt yourself. Plus, developing guitar skills takes time. But as long as you’re taking your time to approach every chord in the right way (as you’re doing now), you’ll undoubtedly achieve your goals.

We hope this article helped you get on the right track!

Mastering the G Major chord on guitar is not easy, but it also shouldn’t be intimidating.

After all, practicing the G chord will only improve your overall performance and expand your repertoire significantly!

Want an easier way to learn guitar? Check out our comprehensive list and reviews of online guitar lessons that work.

How to Play the B Chord on Guitar (Tips & Easy Way)