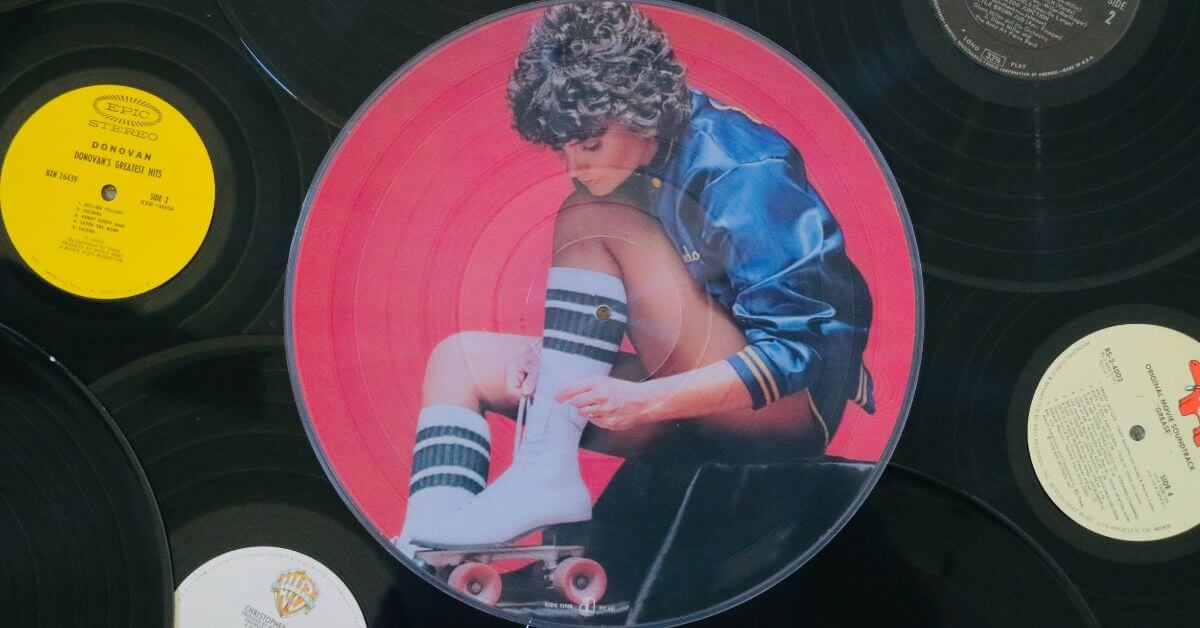 In the 1970s, a huge amount of great music was produced.

It’s also a time when many icons were born.

In other words, this decade was full of surprises, and it’s not easy to pick the top 70s songs.

However, after thorough research, we’ve managed to select the best 70s songs of all time.

Keep an eye out for some hidden gems too!

1. “God Save The Queen” by Sex Pistols

One of the music genres that thrived in the 1970s is punk.

And when you think about punk, one of the first things that comes to mind is: Sex Pistols.

And not only have they disrupted the music scene with their “God Save The Queen” but they also crashed Queen Elizabeth’s Silver Jubilee celebration.

The greatest songs of the 70s also include some soft melodies.

Although “Dance Away” by Roxy Music didn’t hit number one, it was one of the best-selling singles in the UK.

Another genre that thrived in the 70s is, of course, disco music.

And is there a better way to describe 70s disco hits than with Bee Gees?

“Stayin’ Alive” is undoubtedly one of the most popular 70s songs.

When it comes to the most impactful 70’s songs, it’s impossible not to mention “Bohemian Rhapsody.”

This 6-minute suite was entirely written by Freddie Mercury.

“Bohemian Rhapsody” became the band’s signature song as well as one of the greatest hits of all time.

Another band that released some of their best work in the 70s is Fleetwood Mac.

Released in 1977, their iconic song “Dreams” reached the top spot on the Billboard Hot 100.

It also sold more than one million copies.

We’ve already mentioned that the 1970s was a decade when many icons showed up.

Well, Bowie was one of them.

And his track “Heroes” was life-changing – both for music history and his fans around the world.

This epic pop-rock song is also one of the best songs of the 70s.

The song ranked number four when it was released.

It also became popular among younger generations after being used in the Guardians of the Galaxy OST.

8. “London Calling” by The Clash

Not everyone gets to be in the Grammy Hall of Fame.

But The Clash with their “London Calling” album has a well-deserved spot there.

And their iconic 70s hit of the same name is one of the most significant songs of the decade.

9. “Heart Of Glass” by Blondie

Without a doubt, Blondie’s “Heart Of Glass” is one of the most danceable 70s hit songs.

Yes, we still love it.

Another 70s song we still can’t get out of our heads is “I Feel Love” by Donna Summer.

11. “Blitzkrieg Bop” by the Ramones

It seems like 70s music was really affected by punk legends.

And one of those legends is, of course, the Ramones.

“Psycho Killer” is another iconic song of the 70s.

Many sources claim that the song is a result of lead singer David Byrne trying to write an Alice Cooper song.

In 1971, John Lennon had a vision of a different world.

And it’s still considered one of the most impactful songs ever written.

Many agree that this is one of the most beautiful songs from the 70s.

Therefore, it’s fair to say that it’s one of the greatest songs of the 70s.

Get ready for some serious dancing.

Besides being one of the most popular 70’s music hits, it’s also one of the best party songs of all time.

17. “American Woman” by The Guess Who

“American Woman” is also considered one of the 70s greatest hits.

At first, the song doesn’t sound like a legendary 70s song.

And that build-up and change of pace turns things around…

With that beginning of the song, you can’t miss Blue Swede’s  “Hooked On A Feeling.”

And we’re still hooked on it.

The 1970s was definitely full of crazy sounds.

And The Osmonds contributed to the 70s rock scene with their hit “Crazy Horses” released in 1972.

The Spinners and Atlantic Records released this soulful masterpiece in 1972.

Who says that 70s music doesn’t have R&B/soul jams?

21. “Don’t Stop Til’ You Get Enough” by Michael Jackson

Speaking of the roots of R&B, soul, and pop…

Released in 1979, this smashing hit is still a popular tune in clubs, parties, and weddings.

So it definitely passed the test of time.

Also, “Don’t Stop Til’ You Get Enough” was the first short film of Michael Jackson’s solo career.

“Caravan” was taken from Van Morrison’s album “Moondance”, one of the best albums released in 1970.

Soulful melodies, heartfelt lyrics, and Van Morrison’s soothing voice… It doesn’t get better than that.

This iconic song was allegedly inspired by Roger Waters’ sensations after being injected with tranquilisers before one of the shows.

“Ballroom Blitz” by British glam rock band The Sweet was released as a single in 1973.

And it quickly topped the charts, especially in Canada.

Although Stevie Wonder wasn’t really superstitious, this track got him another level of fame.

“Superstition” is undeniably one of the most popular 70s songs.

And it probably has one of the most popular basslines of all time.

Although it’s not as famous as “Superstition”, this whimsical track was a big hit in the 70s.

And that’s why it deserves a spot on every 70s songs list.

Todd Rundgren also made an impact on the 70s rock scene.

And his “International Feel” is certainly worth listening to, especially if you like progressive rock.

28. “Stairway To Heaven” by Led Zeppelin

We don’t have to make a big introduction for this legendary band.

And “Stairway To Heaven” is arguably one of the most memorable songs in music history.

Joy Division added a different kind of sound to the 70s music specter.

Their uniquely dark atmosphere and captivating tracks really made an impact on many future artists.

“Transmission” is a part of their iconic album “Unknown Pleasures.”

30. “Brown Sugar” by The Rolling Stones

Of course, the 1970s were also an era of one of the most enduring bands, the Stones.

“Brown Sugar” is taken from “Sticky Fingers”, an album released on their new, and own label Rolling Stones Records in 1971.

Lou Reed’s solo success is marked by “Walk On The Wild Side.”

There is something very raw and simple about this song.

And that’s why it probably still sounds fresh and inspiring.

The 70s music scene was largely affected by the success of the Swedish group ABBA.

After all, their signature song “Dancing Queen” is considered one of the greatest pop songs ever written.

And we can see why – it’s hard to describe the feeling of freedom and happiness you get when it comes up.

However, “Das Model” didn’t become a universal hit until the early 1980s.

Nevertheless, it’s considered one of the most innovative songs made in the 70s.

This soulful masterpiece with an important message was released in 1971.

The single reached number 2 in the US.

This is undeniably one of the most popular songs about family.

But it’s also one of the greatest 70s hits.

It was actually the group’s third #1 in America.

“My Sharona” is The Knack’s debut single released at the end of the decade.

Lyrically, the song is about a girl lead singer Doug Fieger liked.

So, the meaning of the song is quite straightforward – and it fits.

“Free Bird” is a rock classic.

And one of the most memorable songs from the 70s.

Moreover, the “Free Bird” solo comes at Number 8 on Guitar World’s list of the 100 Greatest Guitar Solos of All Time.

Dolly Parton’s “Jolene” is one of the greatest country hits of all time.

It’s a rather lively tune, but when you look at the lyrics, you’ll realize how heartbreaking it actually is.

Also, Miley Cyrus did a really nice cover version of the song in 2012.

However, only one original member is still in the band, but the fact that they’re still actively touring is impressive.

And “Joy To The World” is their most popular recording.

Of course, we didn’t forget about that iconic 4-note riff.

And the story behind it is also iconic – the song was inspired by the smoke spreading over lake Geneva.

The smoke came from a burning casino that caught fire during a Frank Zappa concert.

This song immediately reminds me of “Trainspotting.”

But of course, most people associate it with the fresh rock sounds of the late 1970s.

The song still sounds as lively as ever – it simply evokes a lust for life.

42. “I Will Survive” by Gloria Gaynor

“I Will Survive” is undeniably one of the top hits of the 1970s.

In the song, Gloria Gaynor sings about inner strengths developed after a tough breakup.

And the song definitely survived – after all these years, it’s still a hit.

Don McLean’s “American Pie” was the number-one US hit for four weeks in 1972.

And the popular phrase “the day the music died” refers to a plane crash that killed early rock and roll stars including Buddy Holly.

“Paranoid” was one of the most impactful rock/metal songs of the 70s.

The lyrics were supposedly written by and about bassist Geezer Butler, whom the band often called paranoid.

And according to the band, the song took only 20 minutes to write – almost unbelievable.

You can describe “YMCA” in so many ways – the greatest dance hit, a beloved sing-along song, the most predictable karaoke choice…

But one thing is for sure: “YMCA” is one of the most popular songs of the seventies.

And it’s still played on the radio and at many sporting events.

“You’re The One That I Want” was a life-changing single for Olivia Newton-John, and one of the most played songs in the ‘70s.

“Dream On” is taken from Aerosmith’s debut studio album released in 1973.

And their single “Dream On” really withstands the test of time.

Another 70s song that never gets old is “Heart Of Gold” by Neil Young.

Although he released countless unforgettable songs, this is the singer’s only number 1 hit.

James Brown’s iconic funky tune is undeniably one of the best 70s songs.

The song also has a well-deserved spot on Rolling Stone magazine’s list of the 500 greatest songs of all time.

One of the songs that marked the beginning of this decade is “Let It Be” by The Beatles.

It’s taken from the band’s 12th and final album of the same name.

And it’s a perfect ending to our list of the best 70s songs of all time.

Picking the best songs of the 70s wasn’t an easy task.

There are so many great 70s songs out there.

But, all of the songs we mentioned today made an impact on this music era and the world in general.

Best Songs Ever Made