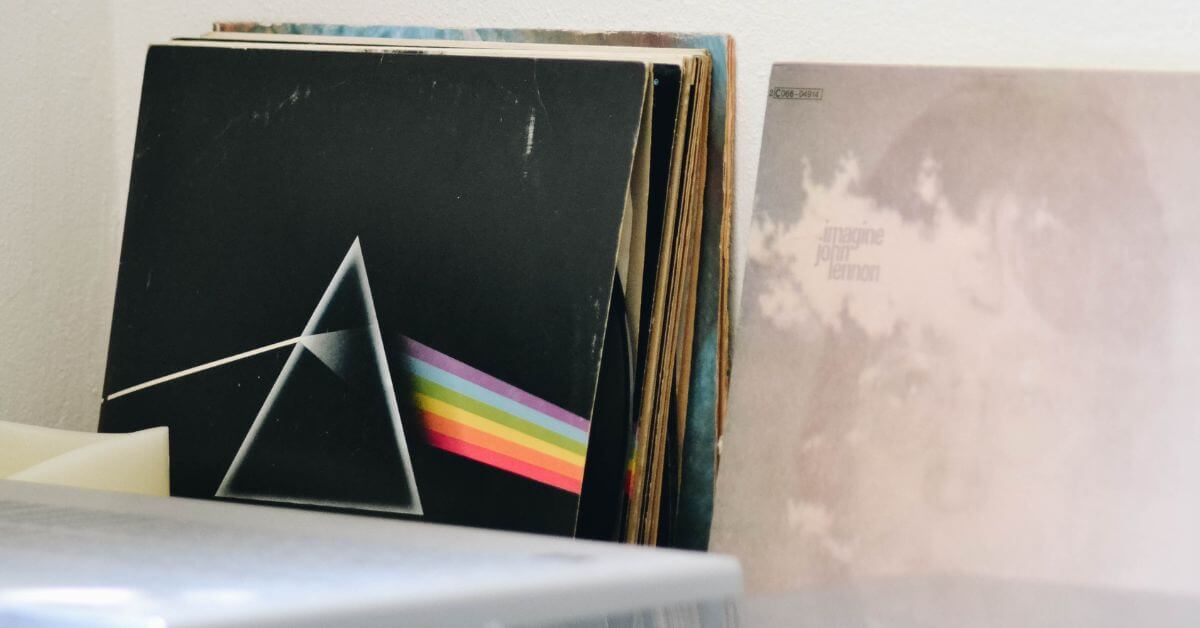 The 1970s was a very interesting decade for the music industry.

And rock music continued to evolve and thrive..

So for today’s article, we made a list of the best 70s rock songs.

All of these songs made an impact on 70s music and culture.

Let’s start with one of the absolute best rock songs of the 70s.

In fact, Queen’s “Bohemian Rhapsody” is considered one of the greatest songs of all time.

The 6-minute masterpiece was entirely written by Freddie Mercury, and more than 40 years later, it still sounds unique and powerful.

2. “Smoke On The Water” by Deep Purple

Deep Purple’s 4-note riff is definitely one of the most recognizable 1970 rock songs.

The song was actually inspired by the smoke spreading over lake Geneva.

The smoke came from a burning casino that caught fire during a Frank Zappa concert.

“Free Bird” by Lynyrd Skynyrd is one of the 70s classic rock songs.

By the way, the “Free Bird” solo has 8th place on Guitar World’s list of the 100 Greatest Guitar Solos of All Time.

So it definitely has a well-deserved spot in this list.

The 1970s top rock songs also have to include “Hotel California” by the Eagles.

The song is a title track from the iconic album of the same name released in 1977.

And it was awarded the Grammy Award for Record of the Year in 1978.

5. “Stairway To Heaven” by Led Zeppelin

Many agree that “Stairway To Heaven” is not only one of the best 70s rock songs but also one of the greatest hits of all time.

And it was actually never released as a single.

But nevertheless, it was the most requested song on FM radio stations in the US in the 1970s.

“Dream On” is taken from Aerosmith’s debut studio album released in 1973.

That being said, it’s actually quite impressive how good they already sounded.

Moreover, the song turned out to be one of the most memorable rock songs of the 70s.

This iconic piano-driven track is undeniably one of the best rock songs of the 70s.

It’s emotional and both strong and dreamy.

8. “Sultans Of Swing” by Dire Straits

Another song that affected the 70s music scene is “Sultans Of Swings” by Dire Straits.

After it was released in 1977, it became a chart-topping hit.

9. “Brown Sugar” by The Rolling Stones

Although it may not be considered one of their most popular hits, “Brown Sugar” was a life-changing song for The Rolling Stones.

It was a number one hit in both Canada and the US, and it reached number 2 in the UK and Ireland.

10. “Born To Run” by Bruce Springsteen

“Born To Run” is taken from Bruce Springsteen’s studio album of the same name.

The album is considered one of his best works.

After all, it sold over six million copies in the US.

“Bridge Over Troubled Water” was released at the beginning of the 1970s.

The whole album is iconic too – it won several awards including Grammy and Brit Awards.

It also made it to the Grammy Hall of Fame.

The Who’s “Baba O’Riley” is an opening track to the band’s fifth album “Who’s Next” released in 1971.

And it’s officially one of the 500 songs that shaped rock and roll.

13. “Have You Ever Seen The Rain” by Creedence Clearwater

Without a doubt, “Have You Ever Seen The Rain” is one of the most memorable rock 70s songs.

It’s nostalgic and slightly melancholic, but somehow also hopeful and romantic… It’s everything you need from a classic 70s rock song.

And if you prefer something more energetic, this one’s for you.

Derek and the Dominos were formed by Eric Clapton in the 70s, and “Layla” is their biggest hit.

When we think about 70s classic rock songs, this track is one of the first things that comes to mind.

And it turned out to be timeless.

Many indeed agree that “Wish You Were Here” is one of the best songs ever written.

And we can understand why.

Swimming in a fish bowl

Although it’s more funk/soul than rock, “Superstition” is undeniably one of the most popular 70s songs.

And it probably has one of the most popular basslines of all time.

Fleetwood Mac released some of their best work in the 1970s.

Released in 1977, their iconic song “Dreams” reached the top spot on the Billboard Hot 100.

It also sold more than one million copies.

And their signature song “Highway To Hell” definitely withstands the test of time.

At least according to radio music editors, DJs, and bar owners.

Many categorize “All Right Now” and the band Free as a 70s one-hit-wonder.

Either way, the song is remembered as one of the best rock songs from the 70s.

And it’s a great tune.

Well, our next pick definitely isn’t a one-hit wonder.

But “Walk On The Wild Side” certainly marked Lou Reed’s career.

And even after all this time, the song still sounds fresh and encouraging.

And it can easily be described as one of the most unique and captivating rock songs made in the 1970s.

There is something very relaxing yet nostalgic in its melody – and that’s probably why it still sounds great.

After it was released in 1976, “The Boys Are Back In Town” made it to the charts.

And many musicians such as Everclear and Bon Jovi made their own version of the song.

And one of its recognizable phrases “the day the music died” allegedly refers to a plane crash that killed early rock and roll stars including Buddy Holly.

This captivating masterpiece was released in 1971 on Funkadelic’s third studio album.

And even after all these years (and decades), the track still sounds fresh and uniquely creative.

Elton John’s “Your Song” may not be a classic 70s rock song, but it’s one of the most popular songs from the 1970s.

And it’s a timeless classic.

And you can tell everybody this is your song…

And the same goes for Marvin Gaye’s “What’s Going On.”

The single reached number 2 in the US.

And Gaye’s album made it to the top of NME’s all-time albums list in 1985.

“Let It Be” is one of the songs that marked the beginning of this decade.

It’s taken from the band’s 12th and final album of the same name.

And it’s probably one of the most widely known Beatles tracks.

28. “Papa Was A Rollin’ Stone” by The Temptations

The Temptations released this cool, captivating tune in 1972.

And it’s essentially about a guy who couldn’t settle down.

The song title is related to an old proverb ‘A rolling stone gathers no moss.’

This famous 70s song supposedly took inspiration from the Ohio Express and the Velvet Underground.

The Cars released it on their self-titled debut album, and it almost immediately achieved international success.

Besides being a 70s hit, Cheap Trick’s “Surrender” is popular among younger generations who watched ‘Guardians of the Galaxy.’

So it’s clear that the song withstands the test of time.

Al Green’s soulful music also made an impact on the 70s funk rock and R&B genres.

And his signature track “Let’s Stay Together” got his name into the Grammy Hall of Fame.

32. “Midnight Train To Georgia” by Gladys Knight & The Pips

And it’s a similar case with Gladys Knight & The Pips.

Although their “Midnight Train To Georgia” doesn’t sound like classic rock, the song is often a part of the 70s rock music playlists.

And when it comes to the most famous rock/metal songs of the 70s, we can’t skip Black Sabbath’s “Paranoid.”

The lyrics were supposedly written by and about bassist Geezer Butler, whom the band often called paranoid.

“More Than A Feeling” is Boston’s popular first single.

It took them five years to complete it.

And then U2 refreshed its popularity with its 2020 cover version.

And although the original sounds like the seventies, both versions are worth mentioning.

Of course, this list of the best 70s rock songs wouldn’t be complete without David Bowie.

And his iconic song made a huge impact on the 70s music scene as well as people and culture in general.

We could be heroes just for one day…

The 1970s also saw the development of many subgenres.

And The Kinks’ guitar sound could easily be seen as the beginning of punk.

Nonetheless, their song “Lola” is an important part of 70s rock music.

And the punk rock sound you can hear in “London Calling” definitely marked the beginning of a new era.

But the song was released in 1979, so it still belongs on this list.

Punk rock legends that also released one of their iconic songs in the 70s are Ramones.

That ‘hey ho, let’s go’ was destined to become iconic.

They played their first show in 1973, and “Rock And Roll All Nite” became the group’s signature song.

It was also named the 16th greatest hard rock song of all time by VH1.

Released in 1978, “Roxanne” is a blend of genres including rock, alternative, reggae, and pop.

And it turned out to be a perfect combination – the song has even been awarded to the Grammy Hall of Fame.

“Fly Like An Eagle” is another good example of the 70s mixture of genres.

And we love it.

“Can’t Get Enough” is also one of the beloved 70s rock hits.

And it still sounds great.

It’s a perfect road trip track or even a wake-up song that will motivate you to start your day right.

And if you’re looking for something more gentle and mellow, Van Morrison’s album “Moondance” is a way to go.

And its title song is also one of the singer’s most memorable tunes.

Van Morrison would probably describe it as marvelous.

This is another Led Zeppelin song that we simply can’t skip.

The sound and atmosphere of “Black Dog” inspired many future artists and musicians.

Blondie’s “Heart of Glass” is an ultimate 70s pop hit with a touch of rock.

But it’s all about danceable beats, cheerful melodies, and Debbie Harry’s timeless charm.

The members of Van Halen have never revealed the full meaning of their song “Runnin’ With The Devil.”

Therefore, of course, the lyrics are often misinterpreted.

Nevertheless, it’s one of the top rock hits of the 70s.

Although it wasn’t a huge success when it came out, “American Girl” is considered one of the band’s best songs.

And it definitely deserves a spot on your best 70s rock music playlist.

“Carry On Wayward Son” is an autobiographical song and one of the classic rock favorites.

Well, the song undeniably has that classic 70s rock sound.

“My Sharona” is The Knack’s debut single released at the end of the decade.

The meaning of the song is pretty straightforward – it’s about a girl lead singer Doug Fieger liked.

We wonder if they knew the song would become one of the most memorable rock songs of all time.

And all the songs we mentioned today played a crucial role in shaping the 70s music scene.

But they’re also considered the best 70s rock songs because they’re still loved today – and probably for many years to come.