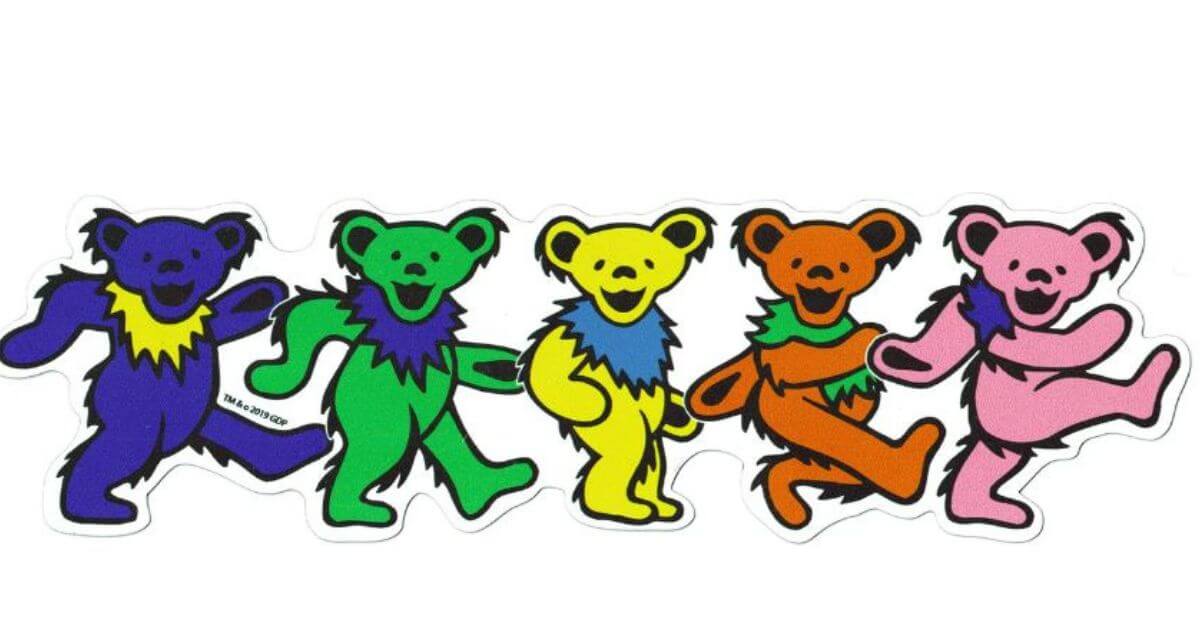 Consider yourself a dyed-in-the-wool Deadhead? A lover of the cultish and mysterious? A fan of all things Ursa (that’s bear in Latin for the kids at the back)?

Then you’re going to want to strap in for this one, because it’s going to be quite a ride.

Let’s get up close with Grateful Dead’s surreal and iconic dancing bears.

Where symbolism is concerned, the dancing bears are certainly nutrient-rich, chock full of good-for-you allusions, metaphors, and insinuations.

While you don’t need an advanced degree in semiotics to uncover the mysterious magic of the dancing bears, some crib notes certainly won’t hurt.

“Bear” Stanley and the Backstory of the Grateful Dead Bears

The dancing bears weren’t there from the start – indeed, they had their debut in 1973, well into The Grateful Dead’s career.

They first appeared on the back cover of the album The History of the Grateful Dead, Volume 1 (Bear’s Choice). And what a choice it was, as the bears have taken on a whimsical life of their own in the cult surrounding the Dead.

But it gets trippier. The bears were designed in honor of one of the band’s first sound engineers, Owsley “Bear” Stanley, who was also a practicing chemist and the man behind a large portion of the LSD being circulated in the States at the time.

Often called the Acid King, he was one of the first private producers of LSD in the world.

Needless to say, he was a counterculture icon in sixties San Francisco. Rumor has it that the nickname originated in his childhood, due to his wild and unruly chest hair.

“Bear” Stanley was pivotal in the tape trading culture that blossomed among Dead fans. He recorded many live performances and distributed the resulting tapes, enhancing the communal, grassroots mood of the Dead’s fandom.

“Bear”, in tandem with Bob Thomas, also designed the “Steal Your Face” logo and the “Lightning Bolt” logo (originally created to keep track of the band’s instruments at shows).

Needless to say, “Bear” was foundational to the early success of the band, and his legacy was captured in the dancing bears.

“Bear’s Choice” wasn’t just a twee and playful name for a killer compilation album. The live recordings on the album were, quite literally, chosen by “Bear Stanley” from his personal archives.

The Aesthetics of the Dancing Bears

Thomas used a goofy-looking 36-point leaden slug bear as the inspiration for the design, which resulted in the playful, light-hearted appearance of the bears.

The bears chart the trajectory of the rainbow, illustrated in sunny shades of yellow, green, orange, red, and blue.

Although Stanley later clarified that the bears are not, in fact dancing, in the popular imagination that impression has stuck.

If you put the bears in a flip book in order and flip through them you will see that they are actually doing a high step march. But “marching bears” doesn’t sound quite as evocative, does it?

But wait, things keep getting wackier. “Bear” Stanley started incorporating the bears into the blotter art for his LSD tabs, which were in heavy demand at Dead concerts.

This meant that fans could trip on custom-made, artistically-inspired dancing bear acid while watching the concert. What I wouldn’t give to go back to those times.

In this way it is clear how the bears not only represented the offbeat, idiosyncratic, creatively potent world of prog-rock, but also how they came to be a stand-in for the psychedelic counterculture more generally.

The Symbolic Legacy of the Deadhead Bears

The Grateful Dead dancing bears have an insouciant, joyful intransigence to them, as though they are bucking conventions to live a life of hedonistic pleasure-seeking and philosophical musings.

The bears laugh in the face of polite society, refusing to grow up, get a job, and put down roots. Instead, they march on, jovial and self-assured, dancing to music only the cool kids can hear.

The bears have since become part of the aesthetic and artistic legacy of the band.

They began to crop up on t-shirts, stickers, pins, and merchandise (both official and homemade) as the seventies progressed.

The dancing bears are to The Grateful Dead what the four symbols are to Led Zeppelin, or the tongue and lips are to The Rolling Stones.

The iconography serves both to further the band’s overarching message, and also serves as an accessible entry point into their philosophy. The bears invite casual listeners to stop and ponder, and dig deeper into the expansive, mind-bending symbolism.

What I love most about the dancing bears is that they serve as something of a postmodern hermetic totem.

There are few obscure, mystical contemporary Faustian symbols in the popular imagination, but the dancing bears serve as an antidote to our surface-level culture.

They represent a space-age symbolism, a visual meme rich in allusions and metaphors.

Best Rock Bands of All Time

35 Easy Karaoke Songs That Will Get the Crowd Singing