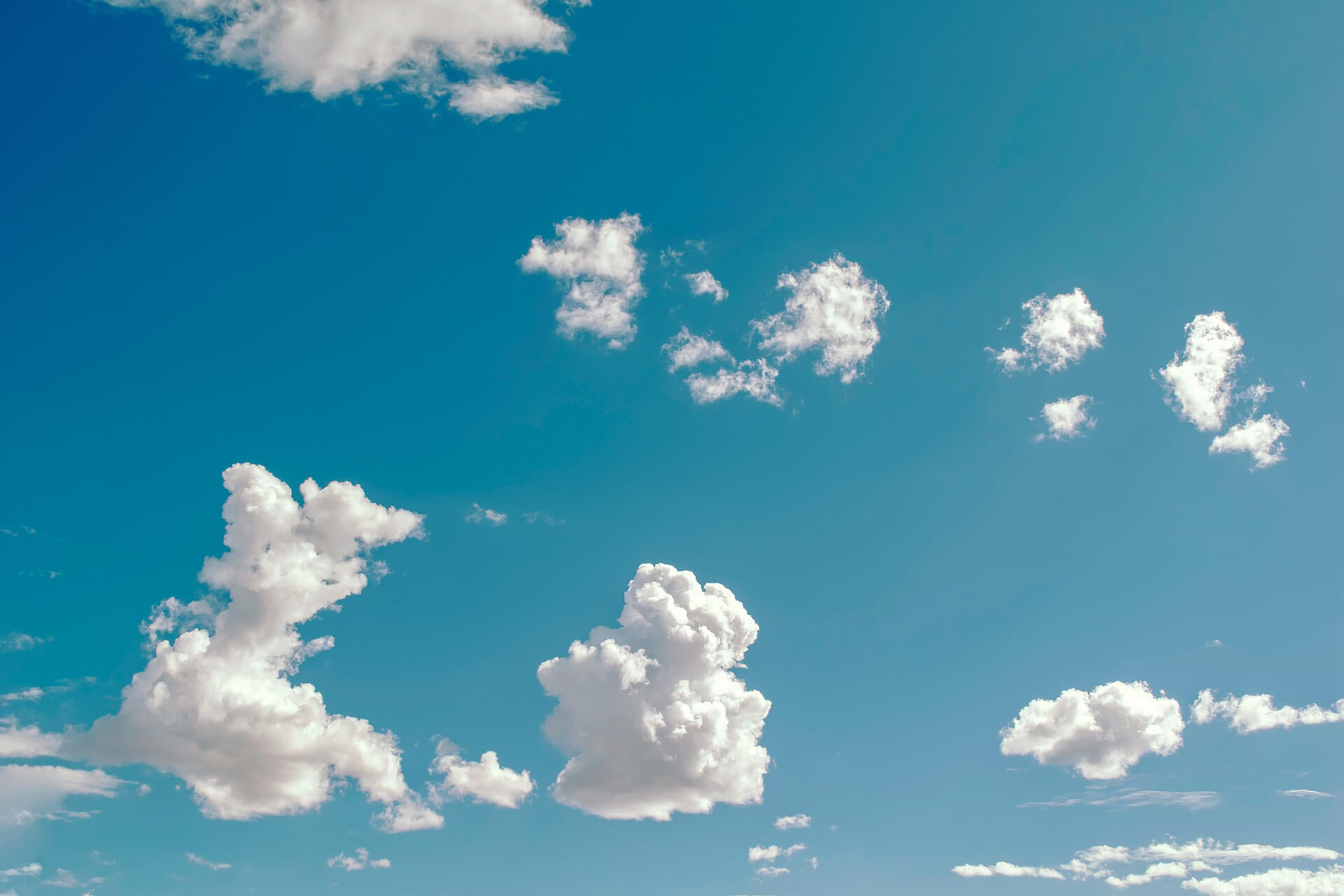 Artists and songwriters have always been impressed by clouds.

Coming in different shapes and types, clouds can create some fantastic sights, but they can also affect your mood.

Therefore, they can represent an array of things.

White clouds are often associated with something positive, especially if you’re on cloud nine or if you have your head in the clouds.

On the other hand, dark clouds in songs represent danger or sadness.

Check out our list of the best songs about clouds to see what we’re talking about!

We can easily imagine ourselves sitting on the cloud with Jack Johnson’s music playing in the background.

Released on Jack’s 2010 album “To The Sea,” “From The Clouds” features his signature chill vibes.

And the lyrics, even though they’re simple, can be interpreted in several ways. “From The Clouds” is clearly a love song, but the chorus might refer to watching the Earth from the clouds and, unlike most people, not claiming it.

“We could watch it from the clouds
We can’t stop it anyhow
It’s not ours.”

This is undoubtedly one of the best rock songs about clouds.

And what makes the song even better is the story behind it. The Rolling Stones released “Get Off My Cloud” as a response to the public pressure to release another single like “Satisfaction.”

After “Satisfaction” became a huge universal hit, it was hard to top it.

However, “Get Off My Cloud” turned out surprisingly well, and it topped charts in the US, UK, Canada, and Germany.

“I was sick and tired, fed up with this
And decided to take a drive downtown
It was so very quiet and peaceful
There was nobody, not a soul around.”

Many songs with lyrics about clouds mention cloud nine, a phrase that refers to pure happiness and elation.

And one of the things that can make you feel like you’re on cloud 9 is listening to Jamiroquai.

They released the single “Cloud 9” in 2017, and it quickly became one of their favorites.

“Just a Cloud” by Lusine is a captivating, ambient song about clouds.

Well, it’s actually about wishing to be a cloud – weightless, unbothered, up in the air. And this song will make you feel exactly like that.

This sweet song with heartfelt lyrics was written by Zach Sobiech, a young songwriter who passed away from bone cancer when he was 18.

After he discovered his illness is terminal, Zach wrote a couple of songs including “Clouds” to say goodbye to his friends and family.

This emotional story inspired the director Justin Baldoni to make a movie about it. The movie “Clouds” was released on Disney+ in 2020.

“And we’ll go up, up, up
But I’ll fly a little higher
Go up in the clouds because the view is a little nicer
Up here my dear.”

This uplifting track by the British singer Olly Murs will make you ‘lift your feet off the ground.’

In the song, Olly is patient with love, but he’s also inviting someone he loves to be with him and leave the world behind.

The idea of simply floating away on a cloud has inspired many stories and songs, including this one.

Without a doubt, this is one of the best feel-good songs about the sky. Or simply one of the happiest songs in general.

Released in 1978, “Mr. Blue Sky” became even more popular after being featured in the film “Guardians of the Galaxy.”

Although it’s nice to see white clouds in the sky, sometimes all you need is sunshine and perfectly clear, blue skies.

“Sun is shinin’ in the sky
There ain’t a cloud in sight
It’s stopped rainin’ everybody’s in the play
And don’t you know
It’s a beautiful new day, hey hey.”

It’s one of the songs about clouds that talks about being infatuated with someone and, of course, having your head in the clouds.

“I can’t stop thinking ’bout your face
Clouds are rolling by
I open my mouth and I breathe them right in
All my thoughts slip away.”

“Born on a different cloud
From the ones that have burst around town
It’s no surprise to me
That you’re classless, clever and free.”

Oasis released this great track on their album “Heathen Chemistry” in 2002.

The song talks about being different from the rest and simply being born ‘on a different cloud.’

The song was written by Liam Gallagher so it might as well be about the lonely path of being an artist.

The best song about clouds with disco vibes is definitely “Clouds” by Chaka Khan.

Clouds in this 1980 track represent something bad, as it’s often the case in art.

Yes, clouds can often mess up our plans, both literally and metaphorically. But eventually, every black cloud goes away.

“Clouds
In the distance
Coming to change my plans
All my dreams will melt like sand.”

“Head In The Clouds” is a gentle, indie tune with heartfelt lyrics.

Hayd released “Head In The Clouds” in 2021. In essence, it’s about the good times of being happy and in love.

You probably have your head in the clouds when you’re freshly in love, and this song is perfect for remembering these days with a touch of nostalgia.

“We had our head in the clouds
Thought we had it all figured out
Planning to fly away
To escape everything on the ground.”

This is one of the songs about clouds based on a rather unusual story.

In fact, Kate Bush was inspired by Peter Reich’s “Book of Dreams” and the writer’s tragic story about his father.

Peter’s father was an Austrian psychoanalyst trained by Sigmund Freud. He used to take his son ‘cloudbusting’ – making clouds rain by using special accumulators he made.

The story took a different turn in the end, but it still inspired Kate Bush to turn it into a song.

“‘Cause every time it rains
You’re here in my head
Like the sun coming out
Ooh, I just know that something good is gonna happen
I don’t know when
But just saying it could even make it happen.”

When creating a list of songs about clouds, we can’t skip a song called “King of the Clouds.”

Panic! At The Disco released this uplifting track on their album “Pray for the Wicked” in 2018.

“Some days I lie wide awake ’til the sun hits my face
And I fade, elevate from the Earth
Far away to a place where I’m free from the weight
This whole world, this whole world.”

14. George Harrison – “Stuck Inside The Cloud”

“Stuck Inside The Cloud” was the seventh track from George Harrison’s posthumous album “Brainwashed.” And seven was reportedly Harrison’s favorite number so the songs he liked the most were always seventh on the album.

Either way, it’s a beautiful song with rather melancholic but heartfelt lyrics and genuine emotions.

“Talking to myself, crying out loud
Only I can hear me, I’m stuck inside a cloud.”

This dreamy 1994 track was inspired by Tori Amos’ personal experiences.

In one of the interviews, Tori explained that “Cloud on My Tongue” is about a man she met in Borneo who missed a chance to be with her and changed his mind a bit too late.

In her 2020 single “Midnight Sky”, Miley decides to go through life with her head in the clouds.

The singer also confirmed that she wrote the song about her split from ex-husband Liam Hemsworth.

Either way, it’s a catchy pop tune perfect for driving in your car underneath the midnight sky.

Sometimes you’ll see heavy grey clouds in the sky, but there will be no rain. It’s the same with life – some things may seem bad at first, but nothing bad comes out of it.

However, in his song “Heavy Cloud No Rain”, Sting wishes for some rain – but in vain.

“I asked my baby if there’d be some way
She said she’d save her love for a rainy day
I look in the sky but I look in vain
Heavy cloud but no rain.”

“Window In The Skies” is undoubtedly one of the most famous rock songs about the sky.

And for many, it’s one of U2’s favorite tunes.

Although the lyrics might be seen as spiritual, “Window In The Skies” is primarily a song about love and forgiveness.

“Oh can’t you see what love has done?
For every heart that cries
Love left a window in the skies
And to love I rhapsodize.”

Another song with lyrics about clouds that will take you to previously mentioned cloud nine is this soulful hit by The Temptations.

It’s a Grammy award-winning soulful hit, to be precise.

“Cloud Nine” also has a touch of a psychedelic funk which was unusual for The Temptations at that time.

Either way, it’s definitely one of the oldies that it’s always nice to come back to.

“Folks now they tell me
They say, “Give yourself a chance and don’t let life pass you by”
But the world around you is a rat race where only the strong survive.”

We were saving this uplifting track by the Danish rock band New Politics for the end.

“Clouds” was released on the band’s 2017 “Lost in Translation”, providing a suitable closure for the album.

In one of the verses, the narrator expresses his love and gratitude for his family.

However, you can interpret the lyrics in your own way – that’s the charm of good music.

Without a doubt, clouds are one of the favorite themes in music and art in general.

Some songwriters see clouds as peaceful and dreamy, and some associate them with something negative.

Either way, a lot of songs are inspired by the clouds, and we hope you enjoyed our pick of the best ones!

And the next time you go out, make sure to notice the clouds.

Songs With Fire In The Lyrics