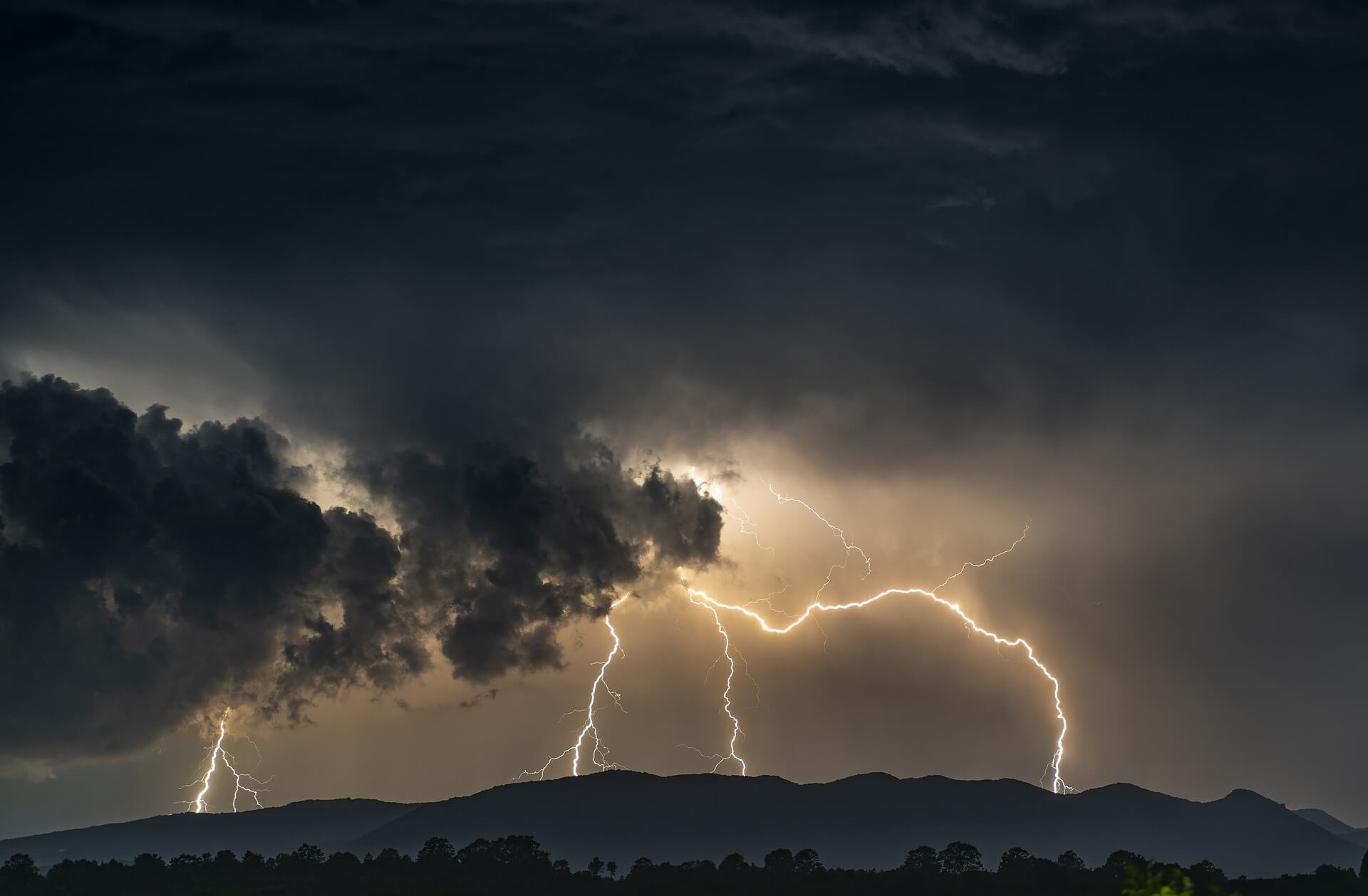 Storms can be frightening and astonishing at the same time, so it’s no surprise that they’re an inspiration for musicians.

There are so many great songs about storms, from rock anthems to calm ballads.

Storms can also be a perfect metaphor for the turbulence and difficulties in life, but they can also be a way of describing someone powerful and overwhelming.

We’ve made a list of the 21 songs about storms, including different genres and moods.

Whether you need a good soundtrack for the stormy weather, or you’re going through a tough time and you want to listen to something relatable, we’ve got you covered!

1. Creedence Clearwater Revival – “Have You Ever Seen the Rain“

This familiar, mellow tune was released as a single in 1971, and it soon reached number 8 on the US Billboard Hot 100.

Essentially, “Have You Ever Seen the Rain” is a song about the band’s breakup, but it’s also been speculated that it’s about the Vietnam War (with rain being a metaphor for falling bombs).

Nevertheless, it’s still a popular song on the radio stations, even after decades of its release.

“Someone told me long ago
There’s a calm before the storm
I know, it’s been comin’ for some time.“

This timeless hit by Eurythmics is seemingly a love song, but it’s also about dark times in a person’s life.

Storms and rain often represent these uneasy feelings and tough moments, and “Here Comes The Rain Again” tackles the topic in a very gentle, subtle yet emotional way.

“Thunderstruck” by AC/DC is probably one of the most popular songs about storms.

The song was inspired by the experience of the guitarist Angus Young and a heavy thunderstorm during one of his flights.

And later on, this energetic song inspired a drinking game where you need to take a sip whenever you hear ‘thunder’. If you know the lyrics, you know it’s a tricky business.

Another popular song about thunderstorms, a bit newer though, is “Thunder” by Imagine Dragons.

The storm is a metaphor for hard times in many songs, and “Thunder” seems to describe the lead singer’s Dan Reynolds journey towards success.

From that perspective, it can be a song about people reaching their dreams, along with the inevitable: “Through hardships to the stars.”

“Kids were laughing in my classes
While I was scheming for the masses
Who do you think you are?
Dreaming ’bout being a big star.”

In a way, it’s a song about liberation and finally being free of the pain caused by the end of the relationship.

It’s a powerful song with an energy that resembles the atmosphere of the storm. After all, Adele is known for expressing strong emotions in a beautiful but intense way.

“I set fire to the rain
And I threw us into the flames
When we fell, something died
‘Cause I knew that that was the last time.”

When it comes to songs about hurricanes, Bob Dylan probably has the most lively one.

However, Dylan’s “Hurricane” is ultimately a protest song.

It’s based on a real-life story of the boxer Rubin ‘Hurricane’ Carter who was falsely charged with murder. He was black, so the song condemns racial discrimination and injustice.

“Hurricane” was released in 1975, but the topic it tackles is unfortunately still current and relevant.

“An innocent man in a living hell
That’s the story of the Hurricane
But it won’t be over till they clear his name
And give him back the time he’s done.“

Another classic hit among songs about storms and rain is “Riders on the Storm” by The Doors.

It’s considered one of the Doors’ greatest hits (for a good reason), and the lyrics written by Jim Morrison are supposedly inspired by some real-life stories of serial killers.

Although the story behind “Riders on the Storm” is somewhat dark, the jazzy mood and rainy background make it a perfect soundtrack for stormy weather.

8. Snow Patrol – “The Lightning Strike (What If This Storm Ends?)“

This powerful tune by Scottish-Northern Irish rock band Snow Patrol perfectly portrays how storms can be both beautiful and terrifying at the same time.

The lyrics written by their lead singer Gary Lightbody were inspired by his experience of a heavy storm in Glasgow.

“The perfect halo
Of gold hair and lightning
Sets you off against
The planet’s last dance
Just for a minute
The silver forked sky
Lit you up like a star
That I will follow.“

Without a doubt, Umbrella remains one of Rihanna’s biggest hits.

The song was released in 2011 on Rihanna’s album “Good Girl Gone Bad”, and topped the charts for consecutive ten weeks.

Essentially, as the singer claims, the song is about protecting someone, with the rain being a metaphor for something bad.

Regardless of the meaning, “Umbrella” is undeniably a timeless pop hit.

When it comes to timeless hits, “Rock You Like The Hurricane” by Scorpions is definitely on the list.

The song was an instant hit after it was released in 1984, and it has typical vibes of 80s hard rock anthems.

So, it’s no wonder it’s considered one of the Scorpions’ signature songs.

Songs that mention the weather very often refer to rain, and although it’s not one of the songs about thunderstorms, “Rainy Night in Soho” is definitely worth adding to this list.

It’s a wonderful love song with the recognizable sound of The Pogues, and the title of the song creates an atmosphere of its own.

“I took shelter from a shower
And I stepped into your arms
On a rainy night in Soho
The wind was whistling all its charms
I sang you all my sorrows
You told me all your joys.”

“Condolence” by the British artist and musician Benjamin Clementine was released in 2015.

Poetic lyrics, the singer’s unique style of singing, and the thoughts he talks about are truly captivating.

He uses the theme of a storm as an introduction to the story about him rising ‘out of nothing’ and becoming what he is now.

“Before I was born there was a storm
Before that storm there was fire
Burning everywhere
And everything became nothing again
And then out of nothing
Out of absolutely nothing I Benjamin, I was born
So that when I become someone one day
I will always remember that I came from nothing.“

“Electrical Storm” was released on U2’s greatest hits compilation album, and it resembles the characteristic sound and energy of the band.

However, the lyrics and the mood of the song somehow reflect the emotional tension that can be connected to the metaphor of an electrical storm.

“You’re in my mind all of the time
I know that’s not enough
But if the sky can crack there must be some way back
To love and only love.“

“Let me not turn away
From happiness or pain
Just not to run away
In my heart and in my head
Let me face
Hurricanes.“

In her song “Hurricanes”, Dido expresses her thoughts on love and life in a very deep emotional way.

Songs about hurricanes are a perfect metaphor for difficulties in life, and in Dido’s song, she’s ready to face them all for the sake of her love.

Back then, Arctic Monkeys had a rather darker and more raw sound, and “Crying Lightning” is a perfect example.

And along with their playful lyrics, the song creates a distinctive mood that easily gets under your skin.

“Your pastimes, consisted of the strange
And twisted and deranged
And I love that little game you had called
“Crying Lightning”
And how you like to aggravate the ice-cream man on rainy afternoons.“

“And I’m shaking like a leaf
And they call me under
And I wither underneath in this storm.“

In the song “I Of The Storm”, the Icelandic folk rock band Of Monsters and Men talks about uneasy feelings and the universal need of an individual to be accepted and loved.

By mentioning the ‘eye’ of the storm, they capture the feeling of being inside of the battle with your own emotions.

All in all, it’s a beautiful piano and drum-driven songs with a strong message and band’s recognizable artistic touch.

When it comes to songs with weather in the title, Duffy’s hit “Rain on Your Parade” certainly comes to mind.

After all, it’s proof that songs about storms don’t have to be rough or sad.

This is another example of a storm-themed song that is of a different genre and mood.

It’s one of the modern country songs about storms by the American country group Little Big Town.

The lyrics of the song are sharp and they manage to capture the idea of a person feeling like a tornado: overwhelming, powerful, and furious.

“Thought you’ll change the weather
Start a little storm, make a little rain
But I’m gonna do one better
Have the sun until you pray
I’m a tornado
Looking for a soul to take.“

Neil Young & Crazy Horse released “Like the Hurricane” in 1977.

This 8-minute track was written in a time when Neil Young couldn’t sing because of his vocal cord surgery.

Nevertheless, he managed to create a memorable love song.

And by comparing his special someone with an eye of the hurricane, he refers to the calm and secure feeling the person evokes, surrounded by more intense circumstances.

“You are like a hurricane
There’s calm in your eye
And I’m gettin’ blown away
To somewhere safer where the feeling stays
I want to love you but I’m getting blown away.“

In his song Wild is the Wind, released on the album “Station to Station”, David Bowie shows his tender and emotional side.

Although Bowie expressed his emotion in a distinctive and artistic way in all his music, Wild is The Wind is incredibly gentle and melancholic, and the theme of the wind perfectly fits this atmosphere.

After all, when you’re in love, you get blown away by the forces you can’t really control, just like the wild wind.

We saved this calm, dreamy tune by Fleetwood Mac for the end, for when the storm passes.

It’s also a bit melancholic, probably because the song is reportedly about  Stevie Nick’s relationship with Mick Fleetwood coming to an end.

The song is also describing someone’s personality as the storm – powerful and perhaps turbulent and intense.

The search for best songs about storms helped us realize how much great music was inspired by this theme – from popular rock hits to melancholic love songs.

What many of them have in common are emotional lyrics, as storms often represent hard times in one’s life.

Most of these songs have powerful messages, and some of them are about personal experiences which makes them even more emotional.

On the other hand, there are some uplifting and catchy tunes to listen to when it’s stormy outside.

We hope this article helped you find what you were looking for!

Songs About Missing Someone

21 Best Songs About Running Away