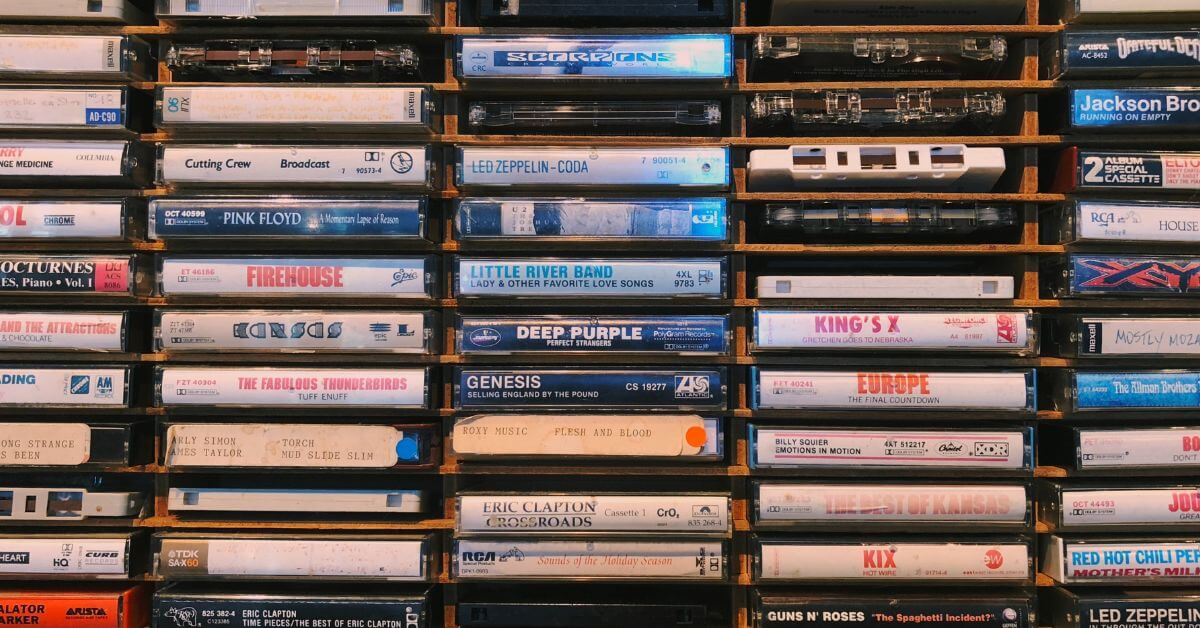 Of all the decades that have come and gone, one decade stands out from the rest in terms of having lots of one-hit wonders.

The 80s had thousands of musicians who scored big with just one track, with some songs capturing the hearts and imaginations of fans across the globe and others quickly becoming forgotten as newer music came out to take their place.

If you want to learn more about what made these 80s hits so unique, keep reading to discover more about some of the best one-hit wonders of the ’80s.

The song was released in 1982 and peaked at number two on the UK Singles Chart.

The lyrics are playful and innocent, but the song has a catchy beat that makes it irresistible.

“Electric Avenue” is a song by Eddy Grant that was released in 1982.

The song was a huge hit, reaching the top of the charts in several countries.

Despite its success, “Electric Avenue” is often considered to be a one-hit-wonder.

The song was Cutting Crew’s only hit single in the United States.

It peaked at number one on the Billboard Hot 100 chart and remained there for two weeks.

The song also peaked at number four on the UK Singles Chart.

The song has been certified platinum by the Recording Industry Association of America (RIAA) for selling over two million copies in the United States.

Stacey Q’s “Two of Hearts” was one of the most popular one-hit wonders of the 1980s.

“Two of Hearts” is a synth-pop tune with a catchy hook and lyrics about being hopelessly in love.

Madness is a British ska band that formed in 1976.

In 1982, Madness released their most famous song, “Our House”.

The song was written by frontman Suggs and keyboardist Mike Barson about Barson’s childhood home in London.

The song was a huge success, reaching number 7 on the UK charts.

Obsession by Animotion is a synth-pop classic that was released in 1984.

The song was written by band members Bill Wadhams and Paul Naumann, and it was produced by Nile Rodgers.

Despite the success of “Take On Me”, A-ha was never able to replicate its success with any other songs and ultimately disbanded in 2010.

However, the legacy of “Take On Me” remains, and it is often considered one of the best one-hit wonders of all time.

Released in 1983, “Maniac” was Michael Sembello’s only hit.

The song was written for the film Flashdance, and its popularity was boosted by its inclusion in the film’s soundtrack.

In 1986, Timbuk 3 released their only chart-topping single, “The Future’s So Bright, I Gotta Wear Shades”.

The song is an ode to optimism, with the narrator proclaiming that they “gotta wear shades” because the future is looking so bright.

The lyrics are simple but effective, and the catchy chorus is impossible to forget.

Shannon’s “Let the Music Play” is one of the most memorable one-hit wonders of the ’80s.

The song was a huge hit in clubs and on the radio after its release.

11. “Mexican Radio” by Wall of Voodoo

One of the biggest one-hit wonders of the 1980s is “Mexican Radio” by Wall of Voodoo.

The song became a surprise hit in the United States.

The song is a synth-driven New Wave track with a Latin-influenced melody and lyrics that describe a man who fantasizes about life in Mexico.

When it comes to the greatest one-hit wonders of the 80s, Buffalo Stance by Neneh Cherry is definitely a song that deserves a spot on the list.

Released in 1988, this infectious hip-hop-inspired track still stands the test of time.

With its dynamic beat and amazing chorus, it’s easy to understand why it became an instant classic.

Released in 1984, the single “Easy Lover” by Philip Bailey and Phil Collins was an immediate success and soared to the top of the charts in countries all over the world, including the US, UK, Canada, and Australia.

The Mary Jane Girls, who were known for their sassy dance moves, were made up of Sisters Joanne, Cheryl, Maxi, and cousin Candi.

The group had other moderate successes, but this particular single “In My House” was their biggest hit.

Although the band was only able to produce one charting hit, they managed to capture a unique and unforgettable sound.

With its catchy chorus and memorable synth riff, this song is sure to make any 80s music enthusiast feel nostalgic.

With its heartfelt lyrics and melancholic melody, “The Lady in Red” is a timeless classic.

De Burgh wrote the song for a very beautiful lady who was dancing with him, and it quickly became an anthem for romanticism.

The song itself is an infectious dance-pop jam, with irresistible hooks and simple yet effective lyrics.

The groove is undeniably catchy and the vocal delivery is upbeat and energetic.

This combination makes it easy to see why it was a massive hit back in 1988.

When it comes to one-hit wonders of the 80s, Voices Carry by ‘Til Tuesday certainly stands out as one of the best.

Released in 1984, “Voices Carry” by ‘Til Tuesday became a synth-rock classic.

“Heartbeat” was Johnson’s only charting single and its success was thanks to its appealing beat and Johnson’s soothing voice.

The song was written by Eric KazWendy and Waldman.

It has a classic 80s sound, with a combination of guitars, synthesizers, and drums that create a unique and memorable atmosphere.

One of the most beloved one-hit wonders of the 80s is Nu Shooz’s “I Can’t Wait”.

This track was released in 1986 and quickly gained a cult following, becoming an iconic example of the era’s sound.

The synth-heavy beat and breezy guitar riffs have made it an enduring part of 80s music history.

To this day, Da Butt remains an iconic part of 80s culture.

Its groovy beat and timeless lyrics are sure to make any listener want to hit the dance floor.

A classic one-hit wonder that deserves to be remembered as one of the greatest songs of the 80s.

“Dear God” was released in 1986 as a part of XTC’s album Skylarking and was the band’s only hit single to chart in the United States.

The lyrics are both heartbreaking and optimistic, and the melody is light and simple.

It has been praised for its positive message and inspiring outlook on life.

For many people, “Steal Away” is the epitome of the one-hit wonders of the 80s.

This song is a great example of how a relatively unknown artist can make an indelible impact on pop culture with just one song.

So, if you’re looking for some of the best one-hit wonders of the 80s, be sure to give Steal Away by Robbie Dupree a listen!

This song was released in 1988 and quickly became a hit in North America, reaching number five on the Billboard Hot 100 chart.

The track has an amazing guitar solo that was performed by Healy himself, and it’s easy to hear why it became so popular.

The 80s was an iconic decade for music and it produced some of the best one-hit wonders of all time.

One of them is “Toy Soldiers” by Martika. Released in 1988, this song hit the Billboard Top 10 and went platinum in the US, making it one of the most successful one-hit wonders of the 80s.

If you’re looking for the ultimate one-hit wonder from the 80s, look no further than “Major Tom”.

It’s a song that transcends time, bringing back memories of the decade and reminding us all why we love 80s music so much.

Released in 1984, the song achieved worldwide fame when it was used as the theme song for the hit film Beverly Hills Cop.

The song is an upbeat, synth-driven piece with an infectious melody and cleverly layered instrumentation that makes it an enduring classic.

Although All I Need is Jack Wagner’s only big hit, it remains one of the greatest one-hit wonders of the 80s.

Its success speaks for itself: it was one of the highest-charting songs of 1984 and still gets airplay today.

So, if you’re looking for a fun, nostalgic trip down memory lane, look no further than this classic one-hit wonder from the 80s.

29. “Breakout” by Swing Out Sister

The band had already gained some attention before “Breakout” with their debut single “Surrender”, but it was their biggest hit by far.

Although Swing Out Sister never achieved major success in the US or UK again, they still remain one of the greatest one-hit wonders of the 80s.

With its upbeat energy and unforgettable hook, “Breakout” is a prime example of why the 80s will always be remembered for its great music.

The song’s lyrics take a critical look at the Vietnam War and the impact it had on those who served in it.

“19” was not only a commercial success but also a critical one. It won the Grammy Award for Best Single of the Year in 1985.

Despite its popularity, Paul Hardcastle was unable to follow up on the success of “19”, and he quickly disappeared into obscurity after its release.

In conclusion, it’s clear that the 80s had a great selection of one-hit wonders to choose from.

These one-hit wonders of the 80s have made a lasting impact on the music industry and have remained popular over the years.

Whether you’re looking for an energetic jam or a heartfelt ballad to dance to, these one-hit wonders have got you covered.

Best One-Hit Wonders of All Time

Best One-Hit Wonders of the ’70s

Best One-Hit Wonders of the ’90s

50 Best One-Hit Wonders of All Time