25 Most Patriotic Country Songs of All Time 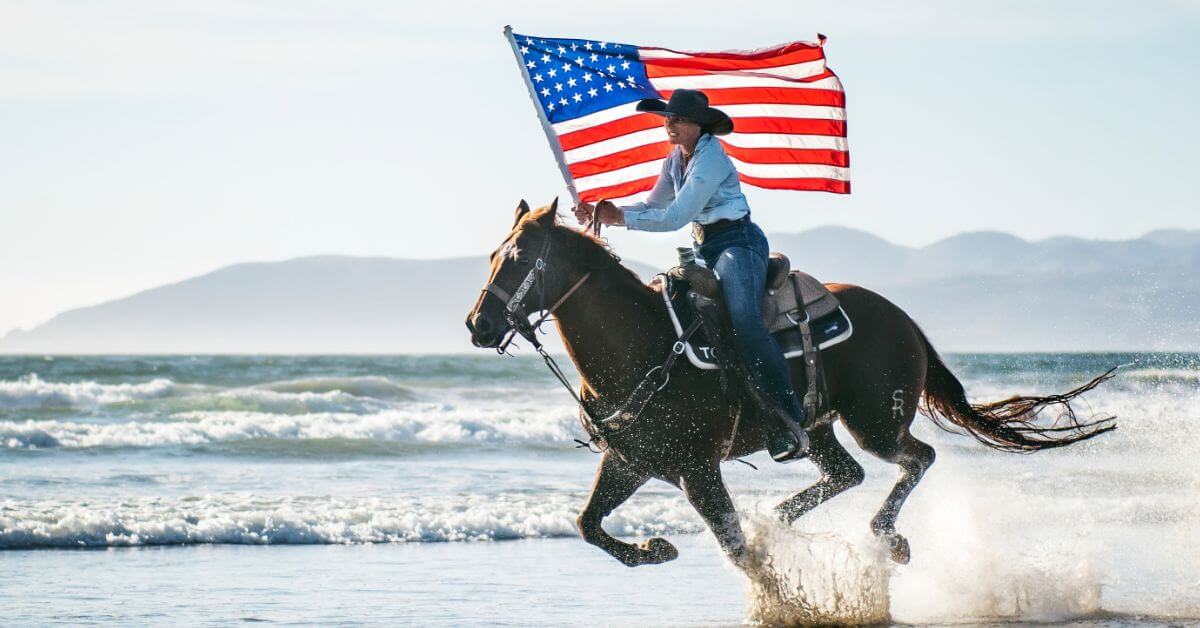 Patriotism looks just right when viewed through the eyes of a country legend.

And throughout history, many artists have shared their thoughts on American pride and what it means to love your homeland.

For anybody growing up, patriotism means loving your country.

That involves defending it, supporting your compatriots, and doing anything for your homeland.

Below is a list of the 25 most patriotic country songs to pay tribute to America.

The first song on our list is always held in the same regard as Ray Charles’ “America the Beautiful” and the National Anthem.

And that’s only because it is one of the greatest patriotic songs ever written by a country singer.

2. “My Town” by Montgomery Gentry

Most post-9/11 country songs about America have a patriotic theme.

And that’s the same for Montgomery Gentry’s 2002 hit that describes the people’s unity in hard times.

The American country music duo celebrates the unity and pride of small towns.

And that’s what defines a great nation.

And Billy Ray Cyrus’ American pride testimonial lives up to those expectations.

Cyrus pays tribute to those who gave everything for our freedom in this song.

The entire album is full of patriotic USA songs.

But no matter how hard it gets, Faith Hill has a message for you in her powerful country song.

It doesn’t matter how bad your situation gets.

5. “American Flag On The Moon” by Brad Paisley

“How do we honor those who have fallen and died for this dream?”

Brad Paisley begins his narration with a powerful rhetorical question.

Then he invites the listeners to dream big for a better future.

He assures them that everything will be okay despite the current struggles.

Isn’t that the clearest show of patriotism?

Thomas Rhett pays the perfect tribute to all the hardworking Americans in his 2015 country song.

The reflective tune is more of a thank-you message to Rhett’s fans.

And he reflects on the real meaning of living in America.

Remember when it was fun to be a little weird?

When life was perfect?

And when you could get away with a little mischief?

We’re talking about your youthful stage.

Kenny Chesney’s “American Kids” is a patriotic song about the little things that matter.

The song describes the universal moments shared by every American youth.

And just like the talented country singer puts it, “there’s so much more to life than partying, tailgates, and bonfires.”

8. “If You’re Reading This” by Tim McGraw

Tim McGraw takes the listeners on an emotional journey while honoring the fallen soldiers.

The lyrics are written from the soldier’s perspective.

And throughout the narration, the fallen hero expresses his regret for not being with his loved one.

He wishes he could kiss them once more and asks to be buried in the “open field out on the edge of town.”

The feel-good song is all about living your best life.

The song was part of Brad Paisley’s 2009 album of the same name and reminded everyone of what life’s like on a Saturday night in America.

The long list of Toby Keith patriotic songs begins with a pure confession of love.

This isn’t the first time the American country singer has articulated his undying love for his country.

But this hit was made special by the raging debate on American-made products.

If you are proud of your country, this is the perfect song to listen to.

Everybody needed a special kind of music after the tragic events of September 11, 2001.

Those that brought healing, hope, and comfort to the great people of the USA.

That’s how Brooks and Dunn’s “Only In America” became a healing anthem after the tragic day’s events.

With lines as moving as “Sun comin’ up over New York City,” it is doubtless one of the best patriotic songs in history.

“Some Gave All” is Billy Ray Cyrus reminding everyone he is a patriotic citizen.

He’s paying tribute to all the men and women who served in the US military.

And that’s one of the best ways to show your love for your country.

If only everyone could be like Billy Ray Cyrus, the world would be better.

Waylon Jennings’ “America” is another song that pays tribute to war veterans.

The best part about this song is that it empowers people to embrace their uniqueness.

It pays homage to America and its people.

And it continues to grace special occasions like the Fourth of July.

There are a few better songs to express American pride than Aaron Trippin’s patriotic anthem.

Coming out just a few days before the 9/11 tragedy, Trippin’s song was one of the many hits to describe the tragedy.

It peaked at #20 on the US Billboard Hot 100 chart and reached #2 on the country chart.

On the one hand, he wants to be a great father and husband.

But on the other, he wants to serve his country.

The song was part of Keith’s 2003 Shock’n Y’all album and topped the US Billboard Hot Country Songs chart for four weeks.

Dierks Bentley doubles as an excellent storyteller and an underrated country singer.

And that comes out perfectly in his 2012 patriotic song.

The lyrics describe all the challenges an American citizen would relate to.

But at the same time, it is uplifting and comforting and will leave you feeling much better about your country.

17. “I Love My Country” by Florida Georgia Line

“I Love My Country” is the ultimate patriotic song expressing American pride.

In this country song, the American music duo acknowledges that the country may be experiencing a rough time.

But there’s no point in losing yourself in the struggle.

Instead, take pride in it while you still can.

18. “The Ones That Didn’t Make It Back Home” by Justin Moore

Justin Moore’s song is a tribute to the American soldiers who died in the line of duty.

Thus, the soaring lyrics can be used to describe those individuals who paid the ultimate price for it.

19. “Something To Be Proud Of” by Montgomery Gentry

Montgomery Gentry’s patriotic song reflects on the little things to be proud of.

The lyrics describe all the good things Americans do for their country.

From putting food on the table to taking care of your baby and just living a good life, there’s always something to be proud of despite the current struggles.

“Take Me Home, Country Roads” is a song about homesickness.

John Denver sets the mood with his magical voice while describing a happy place that’s only comparable to heaven.

When he sings, “Life is older, older than the trees,” he’s showing respect to the motherland.

As the narration ends, the message gets clear.

Denver only wants to go back home, where he belongs.

Trace Adkins is probably in the same category as Toby Keith when it comes to the greatest patriotic songs of all time.

And in this 4-minute country single, he pays tribute to the men and women who have served in the military.

Precisely, the lyrics are centered on the sacred Arlington National Cemetery and a fallen American soldier.

This would be the perfect song to pay homage to the war veterans.

The blossoming love in a united country is there to see in Jake Owen’s lyrics.

And his feel-good song is about being free, young, and adventurous.

The first few lines set the tone for the beautiful composition.

It is also a celebration of America and anyone living the American dream.

Country singers are known to hold strong opinions on many issues.

And Chely Wright shows her support for the military in her iconic 2004 country song.

The song is an account of a real-life story.

Loving your military is probably the least you can do to express your patriotism.

24. “Where Were You (When The World Stopped Turning)” by Alan Jackson

Like many country stars at the time, Alan Jackson played a key role in healing a broken nation following the 9/11 tragedy.

And his famous song became an instant patriotic anthem.

In this song, Alan doesn’t intend to remind the listeners of the hurt that followed the tragic attack.

But rather how everyone stood for each other on a day when many needed uplifting.

Partly patriotic and partly sentimental, Johnny Cash’s “Ragged Old Flag” recalls what the country and the flag have endured throughout history.

The Man In Black wrote this song to encourage patriotism in the face of political turbulence.

That’s why many people associate this song with the Watergate scandal.

And several years later, it is still a patriotic anthem, gracing major events like the American Super Bowl.

But what stands out from these incidents is that American pride has always shone throughout the dark days.

These 25 patriotic songs would be great for showing your love for your motherland.

25 Songs About Swimming That Will Make a Loud Splash