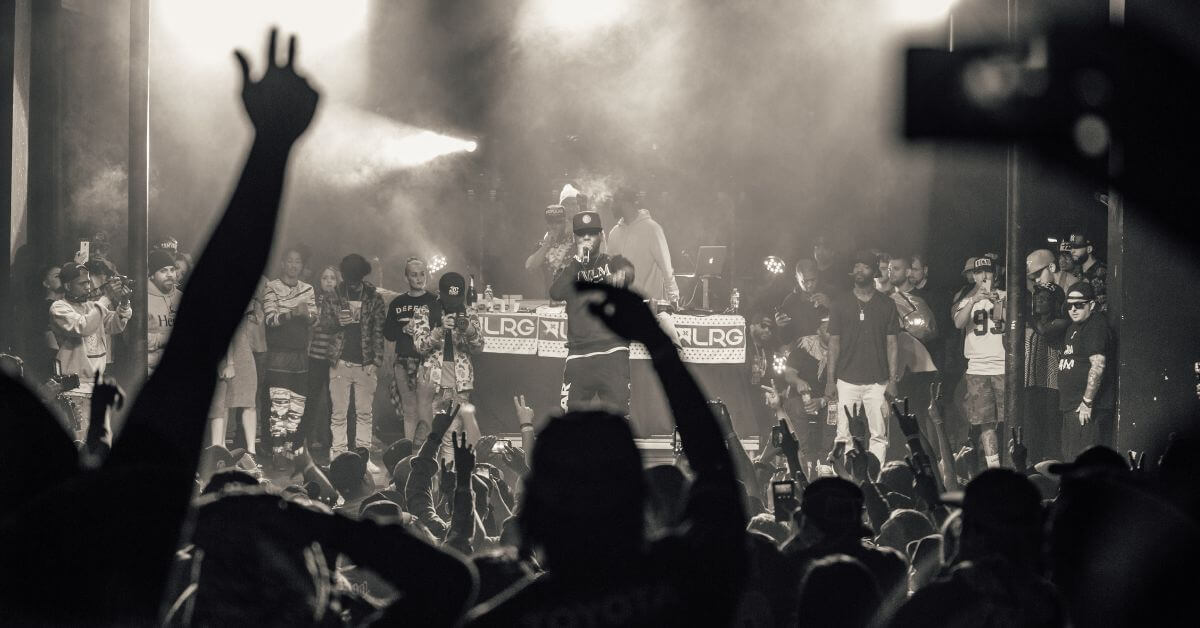 If you’re wondering what is the fastest rap song ever, we have a couple of candidates.

In fact, we made a list of the fastest rap songs of all time.

From Busta Rhymes to Twisted Insane, you’ll come across iconic rap hits as well as rap throwback tracks you can add to your ultimate fast rap playlist.

1. “Break Ya Neck” by Busta Rhymes

When you think about the fastest song in the world, one of the first names you think of is probably Busta Rhymes.

Busta Rhymes is widely known for his fast rapping skills, and he is often described as one of the most prolific hip hop artists and lyricists of his era.

And according to fans and critics, “Break Ya Neck” is Busta Rhymes’ fastest rap song.

The official remix features Twista and Do or Die, and the song originally contains the interpolation from “Give It Away”, Red Hot Chili Peppers’ 90s hit.

If you believe a Rap God walks around under Eminem’s name, this one’s for you.

Although the song doesn’t seem super fast at first, at one point Eminem’s rapping becomes inexplicable.

Moreover, with 1,560 words, the song entered the Guinness World Records as the hit single that contains the most words.

3. “Look At Me Now” by Chris Brown, Busta Rhymes and Lil Wayne

Another song featuring Busta Rhymes’ fast rap verses is “Look At Me Now” from 2011.

The song was released on Chris Brown’s album F.A.M.E, and it was very well received.

And that comes as no surprise – besides impressive rapping, the song is characterized by dirty south-inspired elements, strong bass, and horn jam sounds.

All in all, “Look At Me Now” definitely deserves a place on every super fast rap playlist.

The concept is very interesting because this is actually a speed rap compilation.

DJ Lil Sprite crafted a beat and gathered the quickest MCs who spit a verse over it.

If you want to hear the fastest verse, skip to 5:42 and check out the Kansas city rapper Mizury Mike.

“Mista Tung Twista” is a really fast rapping song that will leave you speechless.

This is arguably Twista’s fastest song, and since he is known for his incredible fast rapping, that’s quite a title.

Twista is, in fact, proclaimed the fastest rapper of all time, and in “Mista Tung Twista”, he clocked 280 words per minute.

“Midwest Choppers 2” is an ode to America’s fastest rappers.

The song is actually a form of a rap battle between skillful rappers, and that’s why it sounds so intense.

And as they explain in the verses:

Most intricate tongues of all time

Then a cold wind from the Midwest brought the hardest…

7. “The Chop Shop” by Twisted Insane

If you’re looking for chopper style rap songs, you can always count on Twisted Insane.

The San Diego rapper is without a doubt one of America’s fastest rappers.

And his 2015 track “The Chop Shop” is a fast rap masterpiece.

It was released on Twisted Insane’s album Voodoo, and it remains his fastest song.

8. “Clash of the Titans” by Krayzie Bone

As an answer to Eminem’s “Rap God”, Krayzie Bone released “Clash Of The Titans.”

It was a bold move, but since the song is a part of almost every fast rap songs list, it’s fair to say it was successful.

Krayzie Bone is known as a member of Bone Thugs-n-Harmony, but he also released notable solo tracks, including “Clash Of The Titans.”

9. “Godzilla” by Eminem and Juice WRLD

Another Eminem’s fast rap song that belongs on this list is “Godzilla”, a collaboration with Juice WRLD.

The song features some powerful fast rhymes, and it’s by far one of his fastest raps.

In the song, Godzilla is actually Eminem’s alter ego, drinking and doing all sorts of crazy stuff.

“Godzilla” was also Juice WRLD’s first posthumous release after his death in December 2019.

Another super fast rap song that will blow your mind is “Crispy” by Tonedeff.

In 2013, this underground battle rapper made his mark with “Crispy”, where he showed his skills.

The song was released on his Demon EP, and became one of the most famous fast rap songs of the decade.

The thing is, NoClue made a song with a section clocking in at 14.1 syllables per second.

And that earned him the Guinness World Record for the Fastest Rap MC.

“Creep Fast” is another super fast Twista song worth mentioning.

It’s taken from Twista’s album Adrenaline Rush, and it’s hands down one of his most impressive tracks.

It came out in 2005, and it was immediately recognized as one of the fastest rap songs of the decade.

Dizzee Rascal is a British rapper who definitely deserves your attention.

He is a pioneer of grime music, and his musical style also entails R&B elements, UK garage, bassline, and British hip hop.

All in all, he is a rather innovative artist, and his track “Jus’ A Rascal” is a good example of his fast rapping skills.

What happens when the fastest rappers in the industry get together?

Well, “60 Seconds Assassins” is definitely one of the most intense and unpredictable songs on this list.

So if you’re searching for fast rap songs to expand your playlist, you can’t skip, “60 Seconds Assassins”.

Another fast rap track you should add to your playlist is “That Music” by Crucified.

The song starts with a mysterious piano-driven melody, and then the super fast rapping begins.

It’s hard to believe that someone could rap that fast, but there’s a claim that Crucified can hit speeds over 20 syllables per second, which makes him one of the fastest rappers in the world.

If you’re looking for a rather smooth rap song with a fast section,“Slow Jamz” is your song.

Although it isn’t a rap masterpiece like some of the others songs on our list, it’s a part of many best of fast rap lists.

And it was a big hit when it came out.

The Maryland rapper Logic began his music career in 2010, and achieved mainstream success in 2017.

He released “100 Miles & Running” on his 2018 album YSIV, along with other chart-topping hits.

“100 Miles & Running” is, however, one of his best fastest rap songs, and we believe it has a well-deserved place on this list.

Another Crucified track we can’t skip is “Power Up.”

This song has been proclaimed the fastest rap song of all time by multiple music websites.

After all, as we’ve already mentioned, Crucified is dubbed as one of the fastest rappers in the world.

And although his songs aren’t as popular as Eminem’s, his skills are legendary.

It was released in 2018 on Nicki Minaj’s album Queen.

The song has some mighty verses, and it even topped “Rap God” at the time.

His rapping speed is estimated at 10.3 syllables per second.

20. “The Evergassin Gobstopper” by Twisted Insane

“The Evergassin Gobstopper” is another amazing song by Twisted Insane.

He is known for his chopper style rapping, and his overall musical style has probably been influenced by artists like Twista and Busta Rhymes.

The song was released on his 2007 studio album, The Monster in the Dark.

“I’m On Everything” is a perfect mix of Bad Meets Evil’s style and Eminem’s fast rapping.

On the other hand, the song it’s not insanely fast.

Therefore, if you’re looking for a song to practice your rapping skills, “I’m On Everything” is a good choice.

Another rap song you can learn is “Fast” by Juice WRLD.

The verses are not too fast or complicated, so you can work on your rapping skills without feeling overwhelmed.

Many other Juice WRLD’s songs are less intense or fast-paced as other songs on our list.

As the song’s name suggests, “Speedom” is a rap song full of warp-speed rapping.

But the track is also energetic and motivating, so if you need something to pump you up, this is your song.

And since we’re talking about Eminem and Tech N9ne collaboration, it’s no wonder that  “Speedom” made it to this list.

“Victory” is not the fastest rap song on this list, but it’s definitely one of the most powerful ones.

On the other hand, when you see that Busta Rhymes is involved, you’ll most likely come across some mighty fast verses.

“Victory” was released in 1997 as a part of the album No Way Out (25th Anniversary Expanded Edition).

As we’ve already mentioned, Logic is no stranger to fast rapping.

He recorded the song with Dria, an American singer and songwriter whose vocals made the song even better.

This is far from every great fast rap song, so feel free to explore music from the artists we mentioned today.

All the rappers on our list made an impact on the genre in some way.

And their songs are proof of their fast rapping skills and incredible talent.

Best Rappers of All Time

50 Best Albums of All Time (Greatest Albums Ever Made)

30 Best Songs About Leaving (Work, Home or the Past Behind)