40 Best Songs About Cats of All Time 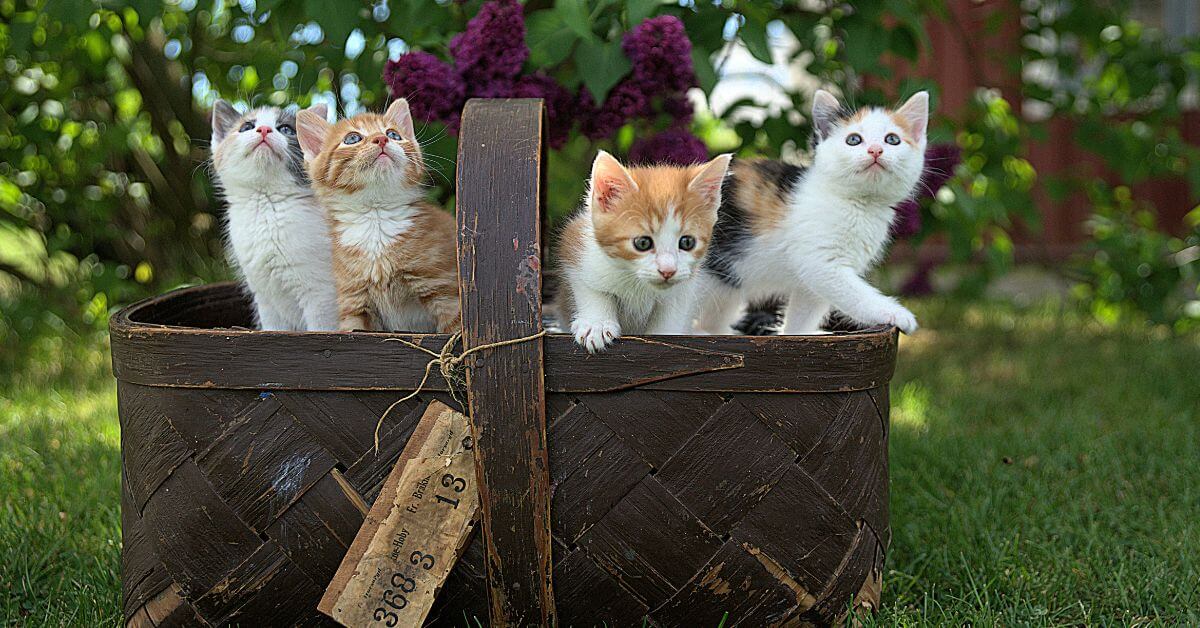 Along with dogs, cats have been our furry companions for ages now.

And in the modern age, they became true stars of the Internet.

So it comes as no surprise that there are numerous cat-themed songs out there.

And for today’s article, we picked the best songs about cats.

Whether you are searching for a tune to dedicate to your cat or you simply want to hear what a song about a cat sounds like, our list has what you’re looking for!

This song is more of a journal than anything else, detailing the bad or rather failed events that have occurred in Squeeze’s life.

The main man in this song attempts several things he watches on television in an effort to appear as a “Cool Cat” and wow the girls, but most of his initiatives are unsuccessful.

2. “Cat’s in the Cradle” by Harry Chapin

There comes a point in life when you understand that nothing at all should stand in the way of the connection that you have with your family.

The lyrics tell the tragic narrative of a father who never makes the effort to spend quality time with his kid.

The story is told in the form of a song. Take this as a lesson that you should never prioritize your work over your family obligations.

It is said that Robert Smith, lead vocalist for The Cure, was greatly moved by Patrick White’s novel The Vivisector, which prompted him to compose this song. This song was written by Robert Smith.

The main character, Hurtle, is shaken to his core when he learns that his lover’s spouse has been responsible for the death of a number of stray cats.

4. “Everybody Wants to Be a Cat” by The Aristocats

This wonderful animated film is a timeless example of how Disney masterfully depicted cats.

This is a fantastic introduction to jazz music for a younger generation that may not be so familiar with the genre.

In addition to being a beautiful song about cats, this is also a terrific introduction to jazz.

Their music was greatly influenced by jazz and blues, despite the fact that they were a progressive folk-singing trio from the United States.

Lynne Taylor and Erik Darling took turns performing vocals for the band, and guitarist Bil Svanee was also a member of the ensemble.

The song in question provides an in-depth commentary on the author’s aging dog, Tom Cat, who is reviled by all of the cats in the area.

The catchy music contributed to the song’s meteoric rise to fame shortly after it was released.

The song, which was written to serve as the title tune for the sensual horror film released in 1982 with the same name, was a great fit for both David Bowie and the film.

There is no one else who could have nailed this particular kind of terror quite like Bowie, and the entire world is extremely grateful that he did.

It went on to become one of his most successful solo singles.

7. “Nashville Cats” by The Lovin’ Spoonful

Do you think there is a common thread running across these songs? A good number of them give off an air of calmness and simplicity. The vast majority of cats are quite satisfied to laze around and occasionally be silly.

The song “Nashville Cats” by The Lovin’ Spoonful is a great example of how precisely this laid-back kitten mindset can be captured in music.

This laid-back groove is one of the many enormous singles that this iconic rock band has released in the course of their career.

This music is the ideal representation of the “strutting around” behavior, also known as moving to the “beat of one’s heart,” that people and cats alike are prone to engage in when they are feeling cool and confident.

Granger Smith tells what life is like when you are surrounded by the things that you love, which in his case includes artwork, cushions, and a cat gym.

As he settles down to sing with other vocalists about his feline buddies, he complains about being coated in cat hair and how it is sticking to him.

This song rose to prominence and managed to win the affection of a great number of listeners, including those who did not even own cats!

10. “Leave My Kitten Alone” by The Beatles

Everyone who was alive during the Beatlemania era is aware of how chaotic the phenomenon was, and the song “Leave My Kitten Alone” was one that drove audiences completely insane.

The song was created by Johnny Preston in the beginning, but the Beatles covered it and gave it their own unique, rock-oriented spin.

This song is a great illustration of exactly how strong John Lennon’s voice was in general.

If you’re a fan of “Friends”, we don’t have to reassure you that “Smelly Cat” is arguably the most iconic song about cats.

In the show, Phoebe (Lisa Kudrow) comes up with a song about a smelly cat. And just like all of her other songs, “Smelly Cat” sounded brilliantly bad.

But the song became a true hit. It was performed by many famous singers over the years.

In the Friends Reunion TV special, Lisa Kudrow joined forces with Lady Gaga to perform it. And in 2015, she even performed it on Taylor Swift’s world tour.

Here comes another great ode to cats. Jane’s Addiction’s Perry Farrell wrote “My Cat’s Name Is Maceo” as a tribute to his cat.

The cat was named after Maceo Parker, an American funk and soul saxophonist. And this is actually a cool story because the band managed to get Maceo (the real Maceo) to join them and perform the song.

This list wouldn’t be complete without a song from the Cats musical.

“The Rum Tum Tugger” is a theme song from the original soundtrack, and it’s an absolute cat-like tune.

14. “Three Cool Cats” by The Coasters

This is not another song about one cat. It’s a song about three cats. Three cool cats, to be more precise.

This very cool jam was first released in 1958, and it has been covered by numerous musicians later on.

This quirky and somewhat smooth tune about cats was released in 2014, but it sounds like it could be much older – it’s full of retro vibes, at least in the beginning.

And the title “Cat On Tin Roof” fits the song perfectly.

It seems like many artists see cats as distinguished, poignant creatures from a theatre play.

If you’re searching for a good song to dedicate to your cat, we have a suggestion: “Phenomenal Cat” by The Kinks.

The song sounds exactly like you would expect a song with that title to sound. And the lyrics are pretty straightforward too:

No one bothered him

He just lived to eat ’cause it kept him fat,

And that’s how he wanted to stay.

With this song and the whole soundtrack, Andrew Lloyd Webber made this legendary musical come alive. And the musical turned out to be a record-breaking and award-winning show.

Peggy Lee did a tremendous job in performing this song for a scene in the Lady and the Tramp Disney movie.

When you’re a kid, this hypnotizing song and that scene with two siamese cats sneaking around really stick with you.

Elvis Costello talks about certain parts of a cat’s body as a metaphor for the story of a troubled marriage.

Although the song is not literally about cats, “Pads, Paws And Claws” sounds very cat-ish. There’s even a ‘meow’ at the beginning of a song.

For cat lovers, every year is the year of the cat.

Joking aside, Al Stewart’s “A Year Of The Cat” is a seriously good tune. It was released on Stewart’s 1976 album of the same name.

Another great cat track from the 70s is “Honky Cat” written by Elton John.

The song actually turned out to be a big hit, and Elton John performed it many times in the 50 years since its release.

“The Kitty Cat Song” by The Troggs is arguably one of the most cat-sounding songs on this list. If that makes sense.

In the song, the singer is comparing his cat to his partner. But he does that very smoothly.

24. “Kitten Got Claws” by Whitesnake

“Kitten Got Claws” is an energetic rock tune released in 1989.

Lyrically, the song isn’t actually about the love for cats. But we can pretend it is.

And it’s one of the songs about cats you can dance to.

“Kitty” starts as a rather gentle, easy song, but it transforms into something more energetic later on. So, the song is presumably about a bad cat.

Well, this is definitely a different cat-related song. There aren’t many prog rock songs about cats, after all.

Janet Jackson’s pop/rock tune named after a black cat was released in 1989, and it got a lot of attention back then.

It was also nominated for the Grammy Award for Best Female Rock Vocal Performance.

Another song about a black cat was written by Jethro Tull’s Ian Anderson and released in 2003.

“Cleopatra’s Cat” is a quirky and catchy tune released in 1994.

Lyrically, the song tells a story of Cleopatra and her cat – and some other historical cat-related stuff.

But it’s close enough. “Go Little Go Cat” is an old jukebox tune, and one of the most danceable rock&roll cat songs on this list.

Another song dedicated to Tom the cat is “Tom Tom Cats” by Laura Nyro.

Despite its funky title, the song has a slow-paced, almost dark beginning, and it progresses to a more intense atmosphere.

If you’re looking for a more popular song to dedicate to your kitty, why not go for Katy Perry’s “Roar”?

Your kitty will grow up to be a real tiger and don’t let anyone tell you otherwise.

Another pop hit you can dedicate to your kitty (if you pretend it’s not metaphorical) is “Kitty Kat” by Beyoncé.

This 1969 song about a cat is performed by The Hassles and written by Billy Joel.

It’s a cool song with easy-going vibes and cat-themed lyrics. So, it definitely deserves to be mentioned.

And if you’re looking for a song about stray cats, look no further: “Stray Cat Strut” is a tribute to stray cats.

I don’t bother chasing mice around

I slink down the alleyway looking for a fight

Howling to the moonlight on a hot summer night…

Don’t be mistaken – Cashmere Cat is the name of the artist, not the song.

Cashmere Cat is a Norwegian DJ and producer and this is her song about the cat called Maru.

Although this isn’t a typical song about cats, there’s something cat-like about its atmosphere.

It’s a bit dark too, so let’s pretend it’s about those two siamese cats from The Lady and the Tramp.

Is there a better song to celebrate the love for cats than this one?

Randy Newman’s “You’ve Got A Friend In Me” is an ideal song for cat-loving people. Therefore, it’s a perfect conclusion to our feline playlist.

When you’re down and troubled

And you need a helping hand

And nothing, nothing is going right

Close your eyes and think of me

And soon I will be there

To brighten up even your darkest night.

We hope you enjoyed our playlist dedicated to cats!

It’s a rather long list, but there are many more songs about cats we didn’t include this time.

It seems like our furry friends keep inspiring people to write songs about them.

40 Best Songs to Wake Up to (Morning Songs)