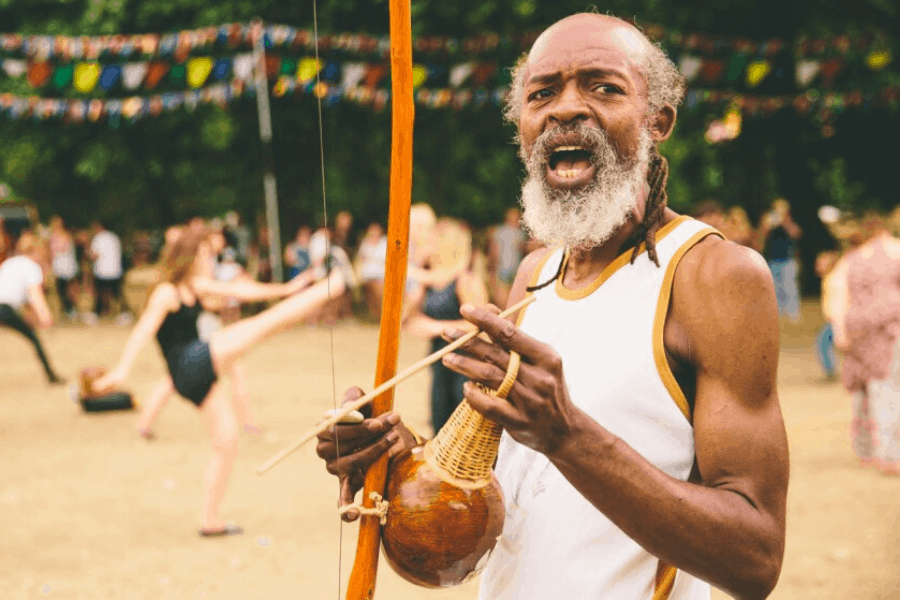 Fun fact! If you’ve read my ‘Here’s My Story’ page, you’d know that I lived in Australia for a bit. Anyways, my English teacher was a capoeira fanatic and invited the class to one of his yearly performances.

Sure enough, there was someone there playing the berimbau and other capoeira instruments!

Just one of the defining moments in my increased interest of exotic musical instruments.

Now, here’s everything you need to know about the berimbau…

African in origin but developed and popularized in Brazil in the early nineteenth century, the berimbau is a musical instrument traditionally used in ceremonies and events to accompany the practice of the unique martial art known as capoeira.

During the time period in which people from Africa were brought to Brazil, those who were enslaved developed this self-defense practice that included dance-like movements controlled by rhythms and sounds from musical instruments, the berimbau being the main focus.

The History of the Berimbau

During the early nineteenth century, African slaves of Brazil would take part in the martial art known as capoeira. An elegant form of self-defense that combines acrobatics, dancing, and musical features to carry the movements of the person.

The fighting is more so a dance between two people, rather than that of one-on-one combat. It includes spectators that encircle them, and there is an overall understanding that fears of being wounded is not present during this flowing of movement.

Capoeira can be compared to that of a game, as it is an exchange of movements and counter-movements back and forth between two individual “fighters.”

Since those who were enslaved were forced from their home unwillingly out to intensive labor, they sought to develop some sort of defense against future unwanted advances, to protect not only themselves but their family and those who made up their community and culture.

This form of self-defense was disguised as a dance or game to protect those who practiced it, as slaves weren’t traditionally allowed to take part in any sort of activity that would give them an advantage against their owners for fear of an uprising.

At the start, those who played this game were arrested, as taking part in capoeira was made illegal by Brazilian authorities at the time. However, those who intensely valued the practice convinced authorities to make it an official fighting technique and encouraged them to include it as an aspect of Brazilian culture.

As time progressed and the art of fighting along to the rhythm and melodies of music grew in overall popularity, schools were established specifically for this martial art.

They were, at first, only seen in the country of origin, that being Brazil, but soon schools in both Europe and the United States began teaching and practicing capoeira as those who took part in traditional martial arts took a liking to the elegance and versatility of this form of self-defense, it’s still popularly practiced today.

Through this progression from turning a once illegal fighting technique into a wildly respected practice, the berimbau advanced along with it. It was how those who played the game moved with each other, for the musical aspect of this art form was the root of its creation.

Those who practiced or are heavily conditioned practitioners know of the unique characteristics that each school or teacher includes, as the rhythms and movements required of the fighters vary from group to group.

A number of the different rhythms or toques were given names, and these titles were based upon saints of the Roman Catholic faith and traditional African societies based around religious practices.

The pulsating beats and rhythms produced by the berimbau called for different movements to be used by the opposing parties partaking in the martial art, and these various patterns are still recognized in the modern practice of capoeira.

What Is a Berimbau Made Of?

The berimbau, Brazilan musical bow, is made of flexible wood and is quite long, measuring just under five feet in length. It is commonly held while standing upright but can be played in a seated position. A metal string, given the title of an arame, produces the sound of the instrument and is strung from the top end of the instrument to the bottom.

The creation of sound from a berimbau comes from the striking of the arame with a baqueta, which is a thin, twelve-inch long piece of wood that one would hold in his or her opposing hand.

In that same hand in which the baqueta is held, the player would hold a rattle small in size, called a caxixi, that would then maintain an underscoring rhythm, coinciding with the strong, bold cadence created by the striking of the string.

To control the tone of the instrument, which is low due to the length and thickness of the string, an individual would use what is known traditionally as a pedra or dobrão, or a smooth, hard, disc-shaped object that can vary, and be either a coin, a rock, or any hard object for that matter, and press it against the arame.

An individual would strike the string repeatedly while maintaining a shaking of the caxixi and then create a higher-pitched sound or stop it entirely by pressing or resting the dobrão against the metal string (arame).

The beating and sound produced from the instrument would “control” the movement of those practicing capoeira by giving their unique, acrobatic movements a cadence to follow.

Other components of the berimbau are the verga, which holds the tightly strung arame. The cabaça, which is an opened, dried and hollowed out gourd-like fruit attached to the lower part of the berimbau. It’s used to amplify and resonate the sound.

Also, berimbaus are generally categorized in three manners. The Gunga (or Berra-boi) lowest tone, the Médio (or Viola) medium tone, and the Viola (Violinha if the medium tone is Viola) has the highest tone.

Different from most other musical instruments, the three categories are based on sound, not size. The berimbau’s sound quality doesn’t depend on the length of the verga or the size of the gourd, but on the diameter and hardness of the verga’s wood and the quality of the cabaça.

All components of the instrument are necessary in order to produce the complete sound, as the striking, shaking, controlling of tone and pitch and resonator all come together to produce what are known as toques, which are distinct rhythms.

Timbre, the quality given to a sound by its overtones, and the Berimbau’s resonance, the intensification, and enriching of a musical tone by supplementary vibration, are controlled or altered by the pulling to and away from the player’s stomach, which gives the instrument its unique sound.

The berimbau is very loud and imitates a ‘crying voice’ that could be either in a subdued or a higher pitch.

For traditional players, the berimbau is viewed as sacred. In their belief, it embodies the spirits of ancestors and the deceased. It’s not considered an object or musical instrument, instead, it carries human qualities, because ‘It cries,’ ‘it gives orders,’ ‘it talks’ to the players, and it provokes altered states of awareness.

In essence, the berimbau is regarded as another player during capoeira gatherings.

This unique sounding, long, single-stringed musical instrument, although still mainly partnered and used along with the practice of Capoeira, is used as an inclusion in modern compositions today.

But not just Brazilian music, other cultures and musical genres, including Jazz, Afro-Brazilian inspired music, and even traditional folk music, showcasing its true versatility.

The inclusion of the berimbau in the song “K is for Kelson” by English folk artist Bibio is the best example of this traditional instrument being used in modern-day music production.

Much of the songs today that the berimbau is used in are usually place it as their focal point. Similar to traditional uses, the player of the long wooded instrument would be the soloist and would have additional musicians as the ones that would give answers to the questions posed by the notes and rhythms that came from the berimbau.

If a group consists of multiple players of the traditional Brazilian instrument, the tones and pitch would vary so as to create complexity in the overall sound. The lowest being the carrier of the main beat, and the highest toned berimbau performing more intricate variations in terms of notes played and sounds produced.

The specific design of the low toned, resonating instrument is unique in its own way, but it does not have a build that is uncommon, as a varying number of other South American and African countries are home to instruments of similar build and use.

The Siddi of India, descendants of East African immigrants, play a single-stringed instrument called a malunga, which like the berimbau, is struck with a thin wooden stick and whose tone can vary depending upon the pressing and releasing of the string. This instrument is of an Indian origin and has a very similar construction to that of the Brazilian instrument.

The very similar build and name shared by the traditional Brazilian berimbau and the belembaotuyan of Guam hint towards its African significance, as slaves would have been traded between these two territories being so close in physical proximity. The traditions built and developed within these slave communities would have been quite similar.

Both instruments have been seen in modern-day jazz, and are a vital aspect of the African culture that was planted upon the arrival of slaves from West Africa.

Although there are instruments that are similar to that of the berimbau, in both sound and construction, what makes it such a unique and individualistic instrument is its inclusion in the practice of Capoeira.

It not only produces a sound that is rich and rhythmic in nature but has the ability to control two individuals partaking in this martial art, for the variance in notes and beats controls how the opposing fighters move with one another.

The rich history of this musical instrument, from its African influence, following on an art form that was once illegal but became one of the most respected fighting practices in the world, and its inclusion in modern-day music, will be told for years to come.

No other instrument today carries that same history, and those who know of it are gifted with sacred knowledge indeed, as they know of a single-stringed instrument that carries a multitude of practices and stories within.

What is a Guzheng? Everything You Need to Know

Drum Riser: Everything You Need To Know